Andretti quoted as stating Hamilton is 'creating a problem that doesn't exist'; Stewart said there is 'no resistance to change' in F1

Lewis Hamilton says he is disappointed with the recent comments made by Mario Andretti and Sir Jackie Stewart after it was claimed he had become a "militant" and that there wasn't a "big problem" with diversity in Formula 1.

Hamilton has been a vocal and prominent campaigner against racism since the death of American George Floyd in May, while he has also launched a commission to encourage more diversity in F1, in which he is the only black driver. F1 have set up their own We Race As One initiative.

The six-time champion has also shown his support in 2020's opening three races. Hamilton performed the Black Power salute on top of his Mercedes car and on top of the podium after winning the Styrian GP, while he has taken a knee before every race, urging drivers who have stood to join him.

But speaking before last weekend's Hungarian GP, motorsport legend Andretti was quoted as telling Chilean newspaper El Mercurio: "I have a lot of respect for Lewis, but why become a militant? He's always been accepted and he's earned everyone's respect.

"I think the whole point of this is pretentious. I feel that way. And it's creating a problem that doesn't exist."

Hamilton responded to the comments on social media, saying that he has always had respect for Andretti, who is famously an F1 and multi IndyCar champion, but called on the American to "educate himself".

"This is disappointing but unfortunately a reality that some of the older generation who still have a voice today cannot get out of their own way and acknowledge there is a problem," Hamilton wrote on an Instagram story.

"Again, this is plain ignorance but that will not stop me from continuing to push for change. It is never too late to learn and I hope that this man who I've always had respect for can take the time to educate himself." 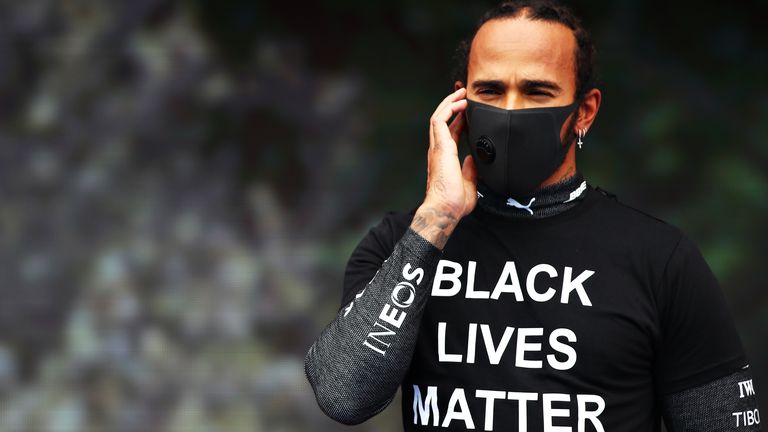 Stewart, meanwhile, denied there was a major racism issue in F1.

"I think Lewis has been a great example to lots of people," the Scottish three-time F1 champion said on Good Morning Britain last week. "He's quite vocal about these elements, I don't think there's as big a problem as there might seem.

"There is no resistance for change if someone is clever and good at what they do. They will be accepted in Formula 1."

In the same interview, Andretti also said that the investigation into a 'noose' found in black NASCAR driver Bubba Wallace's garage - which was eventually discovered to be a door-pull - "became bigger than it should be" and that he wished "politics didn't get mixed up with sport".

He went on to speak about Mercedes changing their livery from the usual silver in 2020.

"Painting the car black, I don't know what good it will do," he added.

"I've met drivers from different backgrounds, races, and I've always welcomed them with open arms. In motor racing it doesn't matter what colour you are; you have to earn your place with results, and that's the same for everyone."

Hamilton has said F1's authorities, teams and drivers need to "do so much more" in the fight against racism and inequality - and called for more "leadership" on the matter - after pre-race scenes at the Hungarian GP he labelled "embarrassing".