An incredible finish as Hamilton crosses the line with a puncture while Bottas drops out of the points entirely; Hamilton 30 points clear in standings; Verstappen nearly beat Hamilton; Leclerc third

Lewis Hamilton limped across the line for a dramatic British GP victory ahead of Max Verstappen after a remarkable finish to the race saw both dominant Mercedes suffer punctures in the closing stages.

Mercedes were in a league of their own before the last three laps of F1's Silverstone homecoming but Valtteri Bottas' tyre blow-up was followed by race leader Hamilton's on the final lap and, in extraordinary scenes, the home favourite only just managed to drive his car across the finishing line.

Hamilton lost so much time that Red Bull, distant third for the majority of the race, were actually ruing an opportunity missed after pitting Verstappen late on to get the fastest lap.

If they hadn't have done so, Verstappen - who finished only five seconds behind Hamilton at the chequered flag and had tyre concerns himself - would likely have had the most surprising of wins.

In another boost to Hamilton, Bottas' puncture and forced pit-stop dropped him out of the top-10 entirely - meaning the Englishman now has a potentially crucial 30-point lead in the F1 2020 championship.

"I've definitely never experienced anything like that on the last lap, my heart nearly stopped," said Hamilton. "I was just praying to get around and not be too slow. I nearly didn't get around the last few corners."

A downbeat Bottas added: "It's of course very disappointing, and unlucky."

It was Hamilton's seventh Silverstone victory, and he is now just four wins off Michael Schumacher's all-time record of 91.

Charles Leclerc finished an admirable third for Ferrari - his second podium of the season - after the late drama. And Mercedes weren't the only team who provided it.

McLaren also suffered a late puncture with Carlos Sainz, who was running fifth for most of the race, following Bottas outside the points. That lifted Daniel Ricciardo in the Renault up to fourth, and Lando Norris to fifth.

Esteban Ocon and Pierre Gasly also benefitted, while Alex Albon managed to finish eighth despite causing a collision for the first of two Safety Cars in the race, being handed a five-second penalty, and pitting twice.

"It was a bit of a slow-burner, but what an extraordinary end."

Sky F1's Martin Brundle aptly summed up the British GP, which - despite a Safety Car on the first lap and fierce midfield fighting throughout - failed to ignite at the front before the incredible closing laps.

Hamilton held off Bottas from pole and after two Safety Car restarts, before engaging his team-mate in a prolonged game of cat-and-mouse as he stayed out of DRS range for the whole race.

Behind them, it was lonely for Verstappen in third. Until the end.

Out of nowhere, Verstappen started taking chunks of time out of Bottas. The advantage was big enough that the Finn may not have been too worried with so little time remaining, but his front-left tyre then started to shred after a puncture.

Even worse for Bottas, he was nowhere near the pits and so had to watch Verstappen and indeed midfield cars get past him before getting back to his Mercedes crew.

Seemingly trying to alleviate their own tyre concerns while also chasing an extra fastest lap point, Red Bull responded by immediately pitting by Verstappen, with Hamilton seemingly cruising to victory unopposed ahead.

But then Hamilton reported similar front-left issues to Bottas. 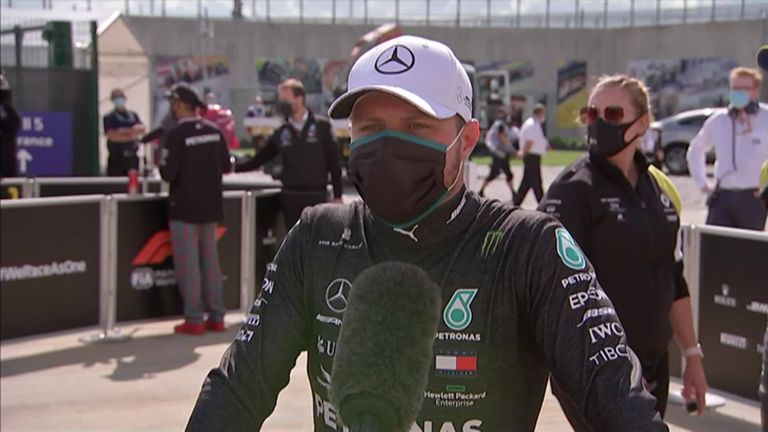 Dramatically, he suffered a puncture himself early on in the final lap, with his gap to Verstappen - more than half a minute before Lap 52 - dropping by every centimetre covered of the famous Silverstone circuit.

The six-time champion somehow kept his composure, changing settings on his steering wheel even as he drove around with three inflated tyres. With another corner, let alone another lap, he likely would have lost his win.

With hindsight, Red Bull may have kept Verstappen out, but as Christian Horner told Sky F1 they had very real reasons for pitting the Dutchman.

With hindsight, Mercedes would have brought in Bottas, who desperately tried but failed to get back into the points on a frenetic final lap.

But no hindsight ultimately needed for Hamilton, who has taken a mighty step towards a seventh world crown. Good days for Leclerc & Ricciardo - not for Stroll & Vettel

While Mercedes were in a league of their own out in front, behind them the closely-matched midfield had plenty of battles.

That started on Lap One - as Albon inadvertently shunted the fast-starting Kevin Magnussen off the road at Woodcote for an early Safety Car - and after the second SC which was triggered by Daniil Kvyat's big crash at Becketts.

Behind the impressive Leclerc, McLaren and Renault were particularly feisty with Ricciardo, Norris and Sainz all overtaking and re-overtaking each other. 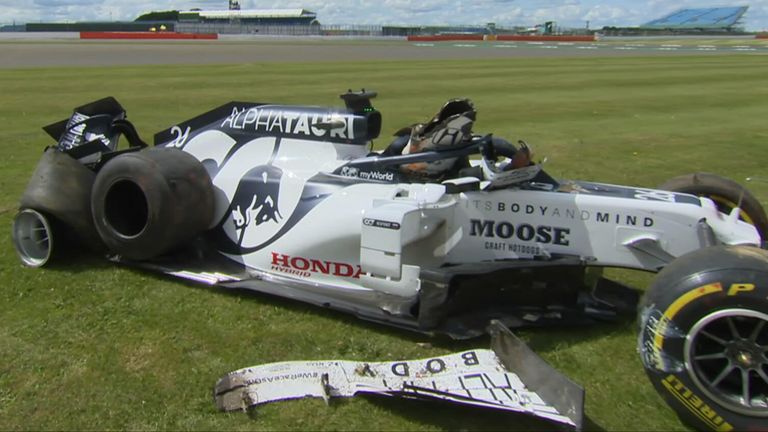 They all also nearly had moments with Romain Grosjean in the Haas, who didn't stop after the Safety Car and was handed a black-and-white flag for his defensive manoeuvres.

Surprisingly not included in that aforementioned battle were Lance Stroll, who fought and eventually lost out to Esteban Ocon in the Renault, and Sebastian Vettel, who struggled massively in the Ferrari.

There was also no fairytale return for Nico Hulkenberg, whose rollercoaster week - which saw him called up to replace the ruled-out Sergio Perez on Thursday - fell flat on Sunday with his Racing Point car not starting.

He is set to get another chance when the F1 2020 season continues with another race at Silverstone next week, the 70th Anniversary GP.