Williams sale: Claire Williams on buy-out, coy on her future

Claire Williams is confident the team's new owners have the financial firepower and wherewithal to take the former champions up the field, although she remained coy about her future into the new era.

In a closing of a long chapter at one of F1's most famous and successful teams, which has been family run since its launch in 1977, Williams were last week bought out by Dorilton Capital, an American private investment firm.

The company now own the Grove team outright, although the famous Williams name will stay on the grid.

Speaking to Sky Sports F1 at the Belgian GP, Claire Williams said: "We've found some new brilliant owners for this team who are incredibly passionate about Formula 1, about seeing Williams return back to the front of the grid. 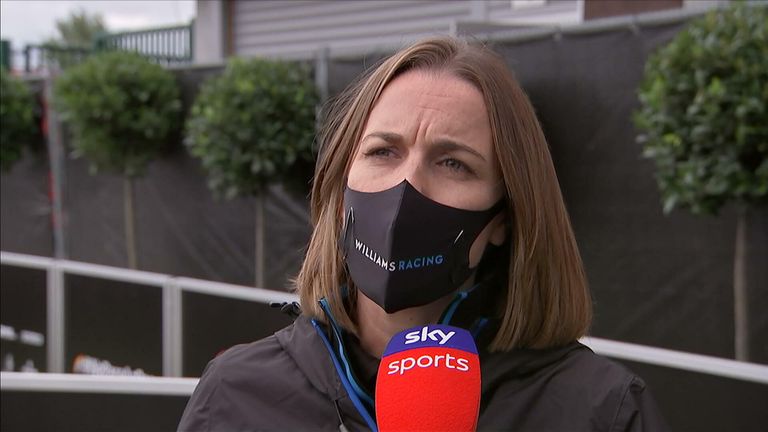 "They've got the financial power in order to take it there. This is a good day for Williams. Yes, it's a new dawn, it's a new era, the Williams family no longer own it, but we've always done the right thing by this team.

"That's to look after our people and to make sure this team is successful - and that's exactly what we've done through this sale."

Williams did confirm that speculation suggesting former F1 owner Bernie Ecclestone was behind the purchase was inaccurate.

Why did Williams sell?

After reporting a a loss of £13m in 2009 in their annual results, Williams said in May they had initiated a strategic review with all options being considered for the team's future - including an outright sale.

Speaking on Friday, Williams said there had been "a number of mitigating circumstances" that led them to start the process.

"We always knew over the last couple of years that we needed a level of investment into the team," said the deputy team boss. "We've all seen how much the bigger teams are spending and a reason why we've seen the decline of our team is because we haven't been able to compete with that level of expenditure.

"The costs have just escalated in the recent years in Formula 1 and we haven't necessarily been able to keep up."

Williams also cited the financial impact of the coronavirus on F1's prize-money pot for this year and the ending of their deal with former title-sponsor ROKit.

Track performance has also slumped in recent years with Williams finishing last in the Constructors' Championship in each of the past two seasons and, despite an improvement in performance for 2020, they remain the only team without a point after six races in 2020.

She said: "I would probably be lying if I said it hasn't been emotional over the past few months, but it has been a few months and we've managed to get our heads around it. This is a good thing for Williams."

What now for Claire and Sir Frank?

Williams has held the role of deputy team principal and been in effective day-to-day control of operations since 2013, with Sir Frank remaining team boss of the team he took to seven drivers' and nine constructors' titles.

"The situation at the moment is status quo," she told Sky Sports when asked about her future under the new ownership.

"This has all happened very quickly. I'm here this weekend in my original capacity as deputy team principal, running the team this weekend and I'm looking forward, to be honest with you, on just focusing on the racing.

"Having been so absorbed in this process that is so all consuming, it's going to be nice to just do my job and that's running this race team this weekend and focus on that in the here and now. Then we will see where the future takes us."