More than half the grid warned after multi-car shunt in Mugello; Stewards say Bottas did nothing wrong with his pace at the front of the pack 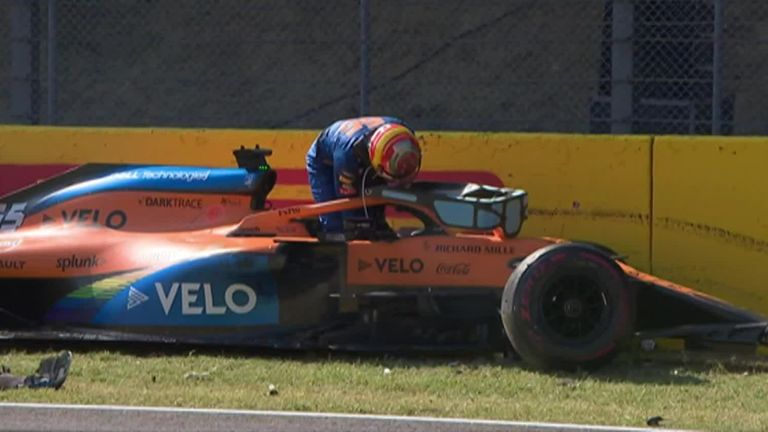 Twelve of Formula 1's 20 drivers have received warnings for their roles in the dramatic multi-car restart crash in the Tuscan GP.

Stewards issued the warning for what they deemed to have been the "inconsistent application of throttle and brake" from the following drivers:

The stewards made a point of noting that Valtteri Bottas, who had been the race leader and was controlling the pace of the pack, and the other seven drivers not listed had complied with the rules on restarts.

"Car 77 [Bottas] had the right under the regulations to dictate the pace," confirmed the stewards.

A statement added: "The Stewards acknowledge the challenges the location of the Control Line presents at this circuit and the desire of drivers to take advantage of the restart.

"However this incident demonstrates the need for caution to be exercised in the restart situation and note that there was an extreme concertina effect which dramatically increased as it moved down the field."

How did the pile-up happen?

The accident occurred as the field bunched up for the lap-five restart, drivers having run behind the Safety Car since the opening tour after an initial multi-car incident which led to Max Verstappen's retirement.

Once the Safety Car pits, the race leader - which in this case was Bottas - is left to control the pace of the pack with drivers not allowed to overtake each other until crossing the start-finish line.

With the tow particularly powerful down Mugello's long pit straight, Bottas waited until the last moment possible to up his pace - meaning the field inevitably bunched up behind him. However, while the Finn and the rest of the front-runners got up to full speed without incident once the lead Mercedes put the hammer down, there was chaos further back as the concertina effect seemingly caught drivers out.

"There were effectively two starts going on there and the second start met up with the first one before they accelerated," said Sky F1's Martin Brundle.

"That was stupid from whoever was at the front," claimed Grosjean over the radio. "Do they want to kill us or what? This is the worst thing I've seen, ever."

But speaking after the race, Bottas said: "Of course when you're in the lead, you try to maximise your chances and I'm not at all to blame for that.

"Everyone can look at everything they want for it. I was doing consistent speed until I went. Yes, I went late but we start racing from the control line, not before that. So the guys behind who crashed because of that, they can look in the mirror. There's no point whining about it."