Hamilton can draw level with Schumacher's record of 91 wins at the Russian GP on Sunday; Watch Sochi event this week live on Sky Sports F1, starting with Practice One from 9am on Friday

Lewis Hamilton admits that being on the brink of Michael Schumacher's all-time Formula 1 wins record "doesn't seem real", ahead of his first chance to equal one of the sport’s greatest milestones at this week’s Russian GP.

Hamilton's 90th career win at Mugello last time out has put him one away from Schumacher's haul of 91 - a record number that was considered untouchable when the German great won his final race in 2006.

But Hamilton has relentlessly raced towards that total in recent seasons amid his own domination of the sport and, with another six victories in nine races so far this year, the six-time champion can draw level with Schumacher this Sunday in Sochi.

"Obviously it's ultimately a privilege to be in a position and have such a great team and a car to be able to deliver weekend in, weekend out.

"But I just feel forever grateful to the people that continue to work hard, I'm just a link in the chain but getting the wins is not easy when you have a great driver in Valtteri [Bottas] pushing you the limit, weekend in, weekend out.

"But I never thought that I would be here, that's for sure."

Most race wins in Formula 1

Schumacher has been at the top of F1's all-time wins table for 19 years since he surpassed the then-record of 51 set by Alain Prost, at the 2001 Belgian GP.

Prost was the record holder for 14 years from 1987 after overhauling Sir Jackie Stewart's previous benchmark of 27, which was set in 1973.

When Schumacher retired from F1 for the second and final time in 2012 after an unsuccessful three-year comeback, Hamilton replaced him at Mercedes and at that stage had won 22 Grands Prix.

Hamilton has since won 69 times for Mercedes in 149 races 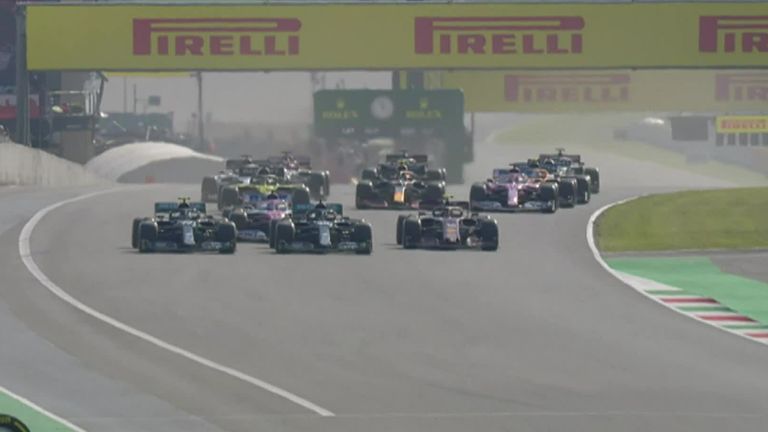 Despite the inevitably of the record, Mercedes boss Toto Wolff says the world champions have not been getting ahead of themselves in planning celebrations.

"We believe very much in karma and you need to be able to let things happen and, certainly, who would have ever imagined that somebody is going to break that record of 91 wins," said Wolff.

"If that were the case, I'm sure we are going to come up with some creative ideas [to mark it]."

Hamilton's form so far in 2020 and 55-point championship lead over Bottas means that, with eight races to go this year, he is also firmly on course to equal Schumacher's haul of seven world drivers' titles.