Renault say they are currently in the process of putting in place a testing programme for Fernando Alonso ahead of the former world champion's Formula 1 comeback next year.

Alonso is returning to F1 with the team with which he spent seven seasons in the 2000s, winning both his world titles, and made a return visit to the team's UK and French bases last week to begin his preparations and drive the simulator.

Since leaving the F1 grid two years ago, the 39-year-old has only driven F1 machinery again in a two-day test outing with McLaren in Bahrain in April 2019.

But, with both team and driver keen to run him on track before what is likely to be only three days of pre-season testing next year, Cyril Abiteboul says they are looking at their options for limited running in old and current cars.

"We are in a process of building his programme. We know that it would be in the second part of the season so we didn't rush anything. He also had his IndyCar programme to do," Abiteboul, Renault's team principal, told Sky Sports F1.

"So we are building the programme which is a programme that could be composed of some 2018 cars that we could do. He'd like to do between two and four days and we are looking into that. That car will be in the Middle East later this year for our young drivers. 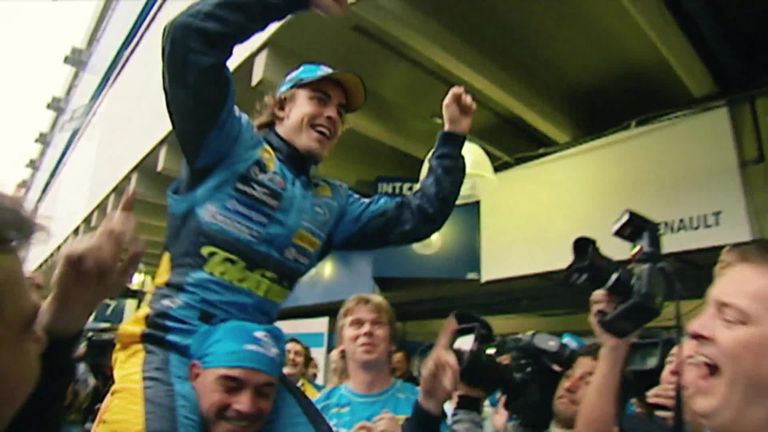 "There could be some filming day that we have not used yet and Renault Corporate is also keen to do a bit of filming as long as we are Renault [ahead of Alpine rebrand].

On December's end-of-season test in Abu Dhabi which is currently only designated for young drivers, Abiteboul added: "There is also some talk about the post-season test as reported, but we also want to be sensible with our young drivers. We have Oscar [Piastri] who has already won the [F3] championship. There is Christian [Lundgaard] and Guanyu [Zhou] in the mix also [in F2].

"So we are trying to keep a good balance between Fernando, who wants to be back at the best possible level, but also our academy drivers."

The Abu Dhabi test is one day in length for the purpose of teams running inexperienced up-and-coming drivers and Renault would have to gain approval from the FIA to run the veteran Alonso.

The regulations for that test state: "Unless otherwise approved by the FIA, not have competed in more than two F1 World Championship races during their career."

Alonso has said he is "available for them for anything they need" ahead of next season and has earmarked F1's Imola race on November 1, which is relatively near to his home in Switzerland, and the season-ender in Abu Dhabi as events he can attend with the team.

"It was very refreshing [for him] to see all the progress the team has made and all the changes," said Abiteboul.

"There is a good mix between a group of people, an attitude, a spirit and a mindset in Enstone. It's very well known for that.

"But all the changes - new faces, new energy, new facilities, new equipment. The same thing also in Viry, where he spent a day. So all of that was very positive for me and very inspirational for all the people who could see him."