"From all of them, George Russell is the one that surprises me every weekend. How he's driving the Williams. Zero mistakes." Watch Sky F1's full Fernando Alonso interview in Sunday's Emilia-Romagna GP race show from 10.30am 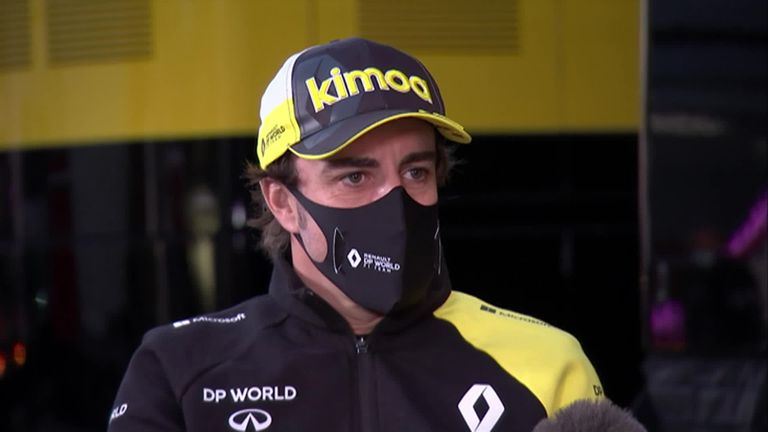 Fernando Alonso has told Sky Sports Williams driver George Russell is his pick for the future among the sport's emerging young crop of drivers.

Alonso, 39, is back in the paddock at this weekend's Emilia-Romagna GP as he gears up for his return to the sport with Renault next season after two years off the grid.

The Spaniard sat down for an interview with Sky F1's Simon Lazenby - which airs in Sunday's race show from 10.30am - and one of the questions he was asked was to state who he rates the highest among the new generation of drivers on the grid.

There are several talented young stars to choose from, but Alonso explained why Britain's Russell, in particular, had stood out for him watching on in his time out of the sport.

"I think there are very talented drivers now in Formula 1," said Alonso, who began his own career at the back of the field with Minardi in 2001 before earning a move to Renault.

"They all came with very nice preparation as well with driver academies that build the performance and the talent, helping them from a very young age. Now they are doing their job.

"From all of them, George Russell is the one that surprises me every weekend. How he's driving the Williams. Zero mistakes. I'm really surprised about his natural speed.

"So if I have to say one name, Russell for the future is going to be my pick."

British driver Russell, 22, joined the grid last year as the reigning Formula 2 champion and, although his Williams car has not allowed him to fight for points, he has yet to be outqualified by a team-mate in F1 after 33 races.

He has also impressively made the second stage of qualifying, Q2, on seven of 12 occasions this year.

Russell is effectively on a three-year loan from Mercedes, who manage his career, and will inevitably be in contention for the next vacant seat at F1's world champion team.

Recent speculation that he could lose his seat to Sergio Perez, a free agent at the end of the year, was ended by Williams at Imola on Friday when the team reconfirmed Russell and Nicholas Latifi as their drivers for 2021.

Russell, who triumphed in F1's Esports series during lockdown, featured alongside three of his long-time friends, racing rivals and Twitch aficionados for an entertaining yet very competitive quiz for Sky Sports F1.

Watch the full fun-filled 25-minute edit in the YouTube video above.