US-based investors buying a big stake in McLaren, valuing the F1 racing team at more than £550m; McLaren selling a minority stake to investors including MSP Sports Capital, Sky News revealed; announcement formally made on Sunday ahead of final F1 race of 2020 in Abu Dhabi

A consortium of US-based investors has bought a 'significant minority' stake in the McLaren Formula 1 team.

Sky News exclusively revealed on Saturday night that MSP Sports Capital, whose partners have had extensive involvement in Major League Baseball, American basketball and European football, is leading a group that will inject £185m into McLaren Racing over a two-year period.

The deal was announced on Sunday morning ahead of F1's season-ending Abu Dhabi GP. Zak Brown, McLaren Racing's chief executive, said it "bolsters our plan to return McLaren to contention for race wins and championships in Formula 1 and IndyCar.".

Describing it as a "new chapter" for the former world champions, Brown said in a conference call that "the journey starts today and I think we'll see impact every year, but it will take time to get back to winning."

Brown has committed to McLaren Racing for the long term, McLaren Group confirmed.

The team's drivers - Lando Norris and Carlos Sainz - qualified in fourth and sixth places respectively for Sunday's race, giving them the chance to clinch third place in the constructors' championship for the first time since 2012.

McLaren's deal with the MSP-led consortium will underline the investors' belief in the team's long-term resurgence and provide a welcome injection of capital into a broader automotive group which has been hit hard by the coronavirus crisis.

The new investment values McLaren Racing, which also competes in the IndyCar championship in the US, at £560m after the injection of the £185m of equity.

The consortium will initially acquire a 15 per cent stake in McLaren Racing, rising to 33 per cent by the end of 2022.

As part of the transaction, one of the consortium's principals, Jahm Najafi, will become a vice-chairman of McLaren Racing, while Jeff Moorad of MSP and Rodrigo Trelles Zabala of UBS O'Connor will join the McLaren Racing board as non-executive directors.

Mr Moorad has been involved in the leadership of a string of US sports franchises, including baseball's Arizona Diamondbacks and San Diego Padres, while MSP is a current investor in clubs in the Spanish and Portuguese football leagues.

The deal for its F1 team does not affect the ownership of McLaren Automotive, the division of McLaren Group which makes luxury road cars and which was highly profitable prior to the COVID-19 crisis. 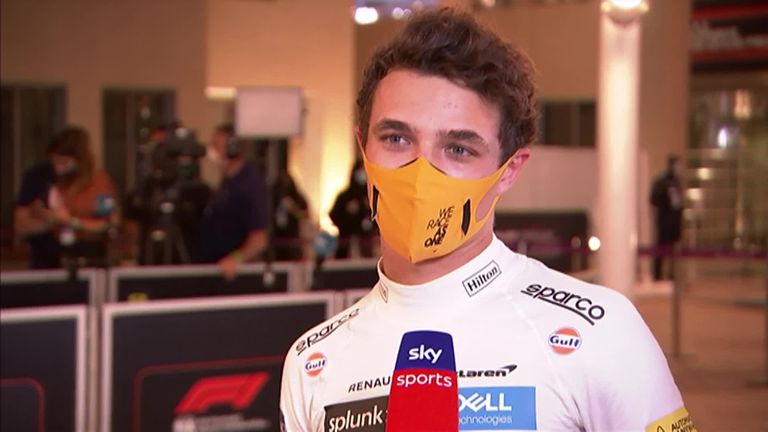 McLaren has fallen on leaner times on the track during the last decade, although under its current racing chief executive, Zak Brown, its fortunes have begun to revive.

The sale of a minority shareholding will provide sufficient funds to assist Brown's ambition of seeing McLaren compete again for F1 drivers' and constructors' titles in the coming years.

An annual budget cap will be introduced in F1 from next year, starting at $145m for each team, falling in the ensuing years to $135m.

By bringing in the new investors, McLaren should be able to operate at the level of the cost cap on a sustainable basis.

It is the latest F1 team to offload a significant stake, and follows the recent takeover of Williams Grand Prix Holdings by Dorilton Capital in a deal which ended the eponymous family's decades-long connection with the company.

McLaren's on-track operations account for roughly 20 per cent of the group's annual revenues.

It has sponsorship deals with companies including Darktrace, the cybersecurity software provider, and Dell Technologies, the computing giant.

The capital-raising for its racing arm forms part of a broader attempt to refinance the company, even as its automotive arm continues its recovery from the pandemic.

McLaren Group is in talks with several bidders for its spectacular Surrey headquarters, a deal that could raise about £180m as part of a sale-and-leaseback deal.

Earlier this year, the company cut 1,200 jobs across its operations as part of a restructuring plan affecting more than a quarter of its workforce.

McLaren is owned by investors led by Mumtalakat, Bahrain's sovereign wealth fund, which injected £300m into the company in March.

It also secured a £150m loan from the National Bank of Bahrain, and is expected to raise a further £400m of equity next year, although reports this week suggesting that it may do so through a public listing of its shares were dismissed as "completely wide of the mark".

McLaren is a major British exporter, directly employing about 3000 people and supporting thousands of jobs across the UK supply chain.

McLaren's road-car division, which was previously a semi-independent company called McLaren Automotive, makes some of the world's most expensive cars, with models including the Senna - named after the legendary former F1 driver.

The unit, which is run by Mike Flewitt, represents the majority of the group's sales.