In his first interview since fulfilling an F1 'dream', Sergio Perez discusses battling for the title with Red Bull, taking on Mercedes, and the 'massive challenge' of having Max Verstappen as a team-mate 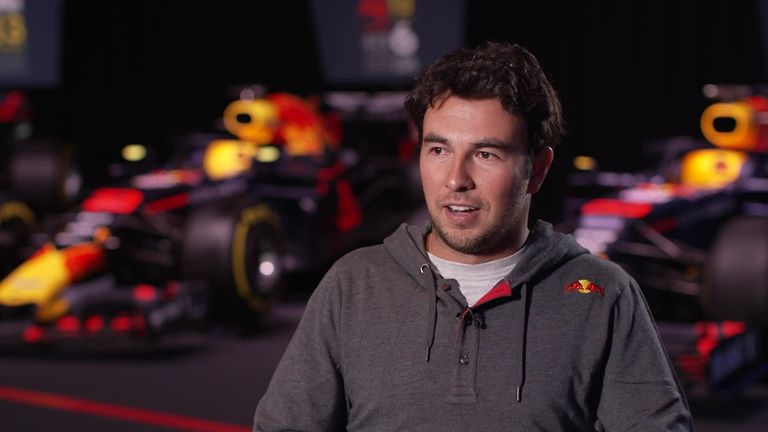 New Red Bull signing Sergio Perez has vowed to "overdeliver" in his debut season as he looks to make the most of a long-awaited F1 opportunity, insisting he is ready for the "massive challenge" of taking on team-mate Max Verstappen and world champions Mercedes.

In one of the biggest transfer developments of last year, Perez lost his Racing Point seat to Sebastian Vettel for 2021 but was then rewarded at the end of a superb season - which included a maiden victory - with a Red Bull drive after the team, Mercedes' main title rivals, axed Alex Albon.

That means Perez, who with 191 race starts immediately becomes one of the most experienced drivers in Red Bull's history, finally has a chance to prove himself towards the front of the grid this season.

"I was waiting all my career to get an opportunity with a top team," Perez said in his first Red Bull interview as he visited the team's headquarters this week. "It finally came and I think it came at the right moment for me."

Perez admitted he "never really considered Red Bull as an option" before 2020 as he was not part of a Red Bull driver programme - which has produced stars such as Sebastian Vettel, Daniel Ricciardo and Verstappen - but described his move as a "dream come true".

The Mexican has never driven for a team who have finished higher than fourth in the constructors' standings in his 11 years in F1, but is confident and intent on delivering Red Bull's first championship since 2013.

"I am always pushing to the maximum and last year I finally had a car that I could show a bit more and people saw what I am capable of, but now is my big opportunity," he explained.

"I have to go onto the next step in all aspects and I think I'm ready for it. The only thing I was lacking was the opportunity. Now I have it, it's up to me to make it work.

Since joining Red Bull in 2016, Verstappen has established himself as an F1 star, and a driver who is extremely tough to beat. He has seen off all three of his previous Red Bull team-mates and only Ricciardo left the team on his own accord, leaving many to describe Red Bull's second seat as a 'poisoned chalice'.

But Perez says he's up for the test.

"It's a big challenge for myself," the 30-year-old said. "We all know Max - how talented, how fast, how much he has grown in the past years, and how complete he is now. He is definitely one of the best and one of the fastest, if not the fastest out there in the car on grid. It's a massive challenge.

"In a way, he's been here a long time, he knows what he needs from the car and I look forward to working with him and pushing together forward as a team."

And Perez is also targeting Mercedes - winners of the last seven driver and constructor championships in the sport.

Red Bull won two races last year, including an encouraging domination of the season-ender in Abu Dhabi, and are optimistic about closing the gap.

"We definitely have to close the gap to Mercedes and hopefully beat them with both cars regularly," added Perez.

"It just takes a little bit to change the whole picture, and I've heard from the engineers they've been working really hard this winter."