83 laps on his return for Romain Grosjean as he makes IndyCar debut with test in his new Dale Coyne Racing car; Grosjean still suffering with soreness to his left hand after horrific Formula 1 crash at November's Bahrain GP 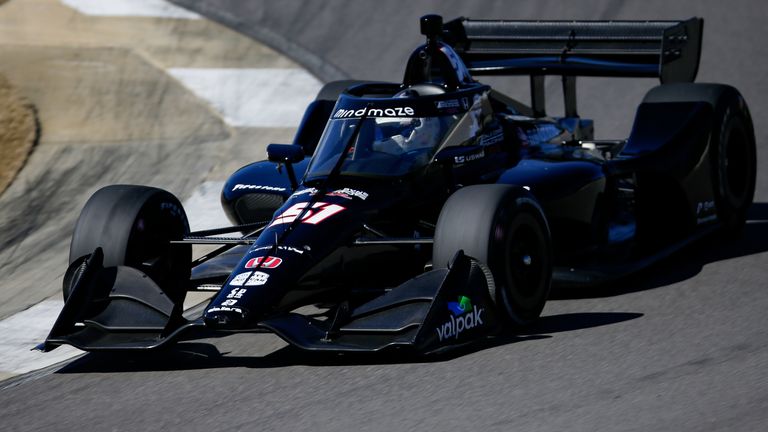 Romain Grosjean said getting back into a racing car cockpit for the first time since his fiery Formula 1 crash "felt like home" as a "really happy" Frenchman made his IndyCar testing debut on Tuesday.

Grosjean, who has signed up to the IndyCar 2021 championship after leaving Haas, was part of a 12-car test at Barber Motorsports Park as he completed 83 laps in his new Dale Coyne Racing car, less than three months after the horrific first-lap accident at the start of F1's Bahrain GP.

The 34-year-old is still suffering from the burns to his hands but was delighted with his first day back on a racetrack.

"It felt like home," said Grosjean. "I didn't have any apprehension or anything,

"It's obviously a new car and I had to adjust a little bit to my new driving position, but things quickly felt quite smooth.

"I then discovered the joys of not having a power steering wheel. I don't regret all the hours in the gym, but maybe I'll do some more, just in case!"

He added: "It felt very normal. It's a different car, a different position, but apart from that, everything felt great and normal.

"I just need to get used to a new car. It reminds me of when I was jumping from Formula Renault to Formula 3 and GP2. So far, I've been really happy with it."

Grosjean was fortunate to survive, let alone escape serious injuries, after his high-speed crash into the barriers in Bahrain last November, with his Haas car splitting in half and bursting into flames.

After climbing out of the cockpit before being rescued by nearby marshals and FIA medical officials, his worst injuries were burns to both hands.

But while Grosjean is still suffering with soreness on his left hand - he is recovering well after surgery over the winter.

"It's actually done very well," he said about his hand during the IndyCar test. "I had a big snap on the last run (of the morning), and that was a bit painful. I expect those. I know it's not fully recovered and is sensitive.

"It went OK. It's not perfect, there's a nice big blister on my left thumb which is not pretty but driving wise it was OK. I was being a bit careful on some of the kerbs, but generally it hasn't been a limitation.

"I didn't really feel it in the car so I guess that was fine. Putting the gloves on and off is not always nice so I tend to keep my left glove on, but generally it's been OK."

Grosjean did have a spin on his IndyCar debut but said that was just a "learning experience" as he adjusted to the difference between his new car and the F1 cars he drove for 11 years.

He has only agreed to race in the 13 road and street courses this season but admitted he could try oval circuits in the future.

The 2021 IndyCar season starts with a race at Barber Motorsports Park on April 18.