There was plenty to admire about Lewis Hamilton's Spanish GP weekend: The outright speed, enough to claim pole ahead of Max Verstappen and Valtteri Bottas. The maturity, backing out of what could very easily have been a first-lap collision with Max as he played, in Lewis' words, the "long game". And the patience, staying close enough to the Red Bull for much of the race before hunting him down following Mercedes' second it-stop decision.

The end result? Hamilton won the ultimate game of cat and mouse, extended his title lead to 14 points and showed why, with all these strings to his bow, he is just so difficult to beat.

Ninety-four points from a possible 104, this is Hamilton's best-ever start to a season - and he and Mercedes have more than stepped up to the 2021 challenge.

It was Hungary 2019 all over again for Max Verstappen, who would have had that same sinking feeling when Lewis Hamilton's Mercedes suddenly disappeared from view behind him on lap 42 to head to the pits and a change of tyres.

Verstappen overtook his pole-sitting rival in impressive fashion at the start and led for 54 of the race's 66 laps yet Hamilton and Mercedes, that old dynamic duo, still had other ideas and conjured up another fine win.

But Verstappen, who spoke positively all weekend about Red Bull's Barcelona gains around a traditional Mercedes stronghold, didn't appear discouraged about another second place and perhaps senses that better opportunities to outgun the world champions are still ahead.

What a difference a tenth of a second makes. If Valtteri Bottas was that little bit faster in qualifying, it may have been him on pole - or at least on the front row - and he likely would have been well in the fight for victory given his race pace.

But instead, Bottas started third and then lost a place on the first lap to a Ferrari. By the time he made his way back through, an eight-second gap to the leaders meant third place was the best he could really aim for.

Bottas may not have finished in the top two yet this season but is still a threat in this form, and the Finn is doing enough to warrant Mercedes' backing - which they emphatically gave him over the weekend following newspaper reports of a mid-season exit.

It probably won't be until next year at the earliest, but Charles Leclerc is certainly going to be worth watching when Ferrari return to competing for F1 race wins.

The Scuderia's 2021 improvements still aren't enough to propel them back in the hunt against their two big rivals, but Leclerc is certainly consistently pushing the SF21 as close as he can get it to the grid's upper echelons.

For the third time already this season, Leclerc took fourth in qualifying and here he was also able to convert into fourth at the flag on race day - nine seconds ahead of Sergio Perez's out-of-position Red Bull. His lap-one around-the-outside overtake of Valtteri Bottas at Turn Three was top class too.

Grid position for the Spanish GP is one of the most important of the season - and so a driver certainly wants to be at his very best for qualifying. But Sergio Perez "was not 100 per cent" on Saturday, with the Mexican admitting he felt "weak" while also struggling with a shoulder issue.

A spin in Q3, a 1s deficit to Verstappen and only eighth in the grid certainly wasn't indicative of the Perez we've seen in recent years.

That left him with an uphill battle in the race and despite picking up two positions on the first lap, he was stuck behind Daniel Ricciardo's McLaren for far too long, leaving him unable to join the fight at the front or even battle Leclerc for fourth.

Red Bull need more. Still, at least his late lunge of a move on Ricciardo around the outside of Turn 1 was very tasty indeed.

This will feel a lot better for Daniel Ricciardo.

He always said it would take time to adapt to his new car and team and that's certainly proved the case for the Australian across this season's opening four rounds. Ricciardo won't see a strong sixth place at Barcelona as the final evidence that he is completely at one with the MCL35M just yet, but this was his best weekend for McLaren yet as he beat Lando Norris in both qualifying and the race for the first time.

Finishing ahead of Sainz's faster Ferrari was also a feather in the Aussie's Catalunya cap.

Leclerc showed the potential of the Ferrari in Spain but Carlos Sainz just wasn't able to replicate his team-mate - made to rue a tiny 0.1s deficit in qualifying and then a difficult start, which dropped him down to eighth.

Sainz impressed from there, but wasn't able to execute a critical overtake on Ricciardo despite appearing to have a faster car. He can, however, take solace from the fact the margins between him and Leclerc are so small after just four races with his new team.

Another points finish to keep his start to the season ticking along nicely, but Barcelona was one of those weekends for Lando Norris. Qualifying ninth wasn't a disaster, but nor was it as high as it could have been on a circuit where track position is king. Norris's session was effectively undone by needing two soft-tyre runs in Q1 after his first was disrupted by Mazepin amid a final chicane traffic jam. Held his grid position through the first stint on Sunday and rose to eighth in the closing laps after his second stop, passing Esteban Ocon with four to go.

Is this the season Esteban Ocon delivers on his F1 promise? It certainly looks like it after four races with the Frenchman, who was tipped for a Mercedes seat not too long ago but struggled last year, having now outqualified Fernando Alonso comfortably on three weekends in a row - and he's also yet to be beaten by his multi-champion team-mate on a Sunday.

Alpine weren't quite as competitive in the race than over one lap in Barcelona, with Ocon attempting a very tricky one-stop strategy, but he still managed to score some points to take his 2021 tally into double figures.

A penalty and a point for Pierre Gasly in Spain, on a weekend AlphaTauri seemed to take a clear step back in the midfield from where they had started the season. Missed Q3 for the first time this year and then missed his marks as he lined up for the race start on Sunday, earning a five-second time penalty for being too far forward in his box.

The Frenchman was at least was able to finish the weekend in attacking style as a 18-lap run on soft tyres brought him up from 16th to 10th.

OUT OF THE POINTS

Lance Stroll, who outqualified Sebastian Vettel again in Barcelona, looked to be on for points on Sunday as he approached a struggling Fernando Alonso with seven laps remaining.

However, it took two laps for Stroll to pass the Alpine - making contact and running wide on Lap 59 before making the move stick on Lap 60 - and that ultimately appeared to cost him as Gasly came charging soon after to overtake the Aston Martin for 10th.

Kimi Raikkonen's Saturday had been a day of extremes: P9 in final practice to P17 in Q1 and out of qualifying. But while Antonio Giovinazzi now increasingly has the upper hand for qualifying pace at Alfa Romeo, Raikkonen is often back ahead in the race.

That played out again here for Kimi thanks in part to pit trouble for his team-mate and his own pace across an opening 37-lap stint on medium tyres. Came back through on his new soft boots in the closing stages but missed out on a first points finish of 2021 that counts by two places and seven seconds.

Sebastian Vettel ended a 12-year streak of top-seven finishes at the Spanish GP after finishing 13th on Sunday, which is also where he started the race. In a DRS train for much of the race and also struggling with his tyres, he never really looked like a points contender.

"If we keep pushing those boundaries, the results will come," said George Russell after Williams threw the strategy dice under the early Safety Car and pitted the Englishman for the first time on lap nine. He one-stopped the rest of the race from there, to the point where he was running 10th and holding that elusive first Williams point with a dozen laps to go. But tyre wear told in the end and, inevitably, the fresher rubber of those cars directly behind ultimately told and Russell was shuffled back down to 14th. 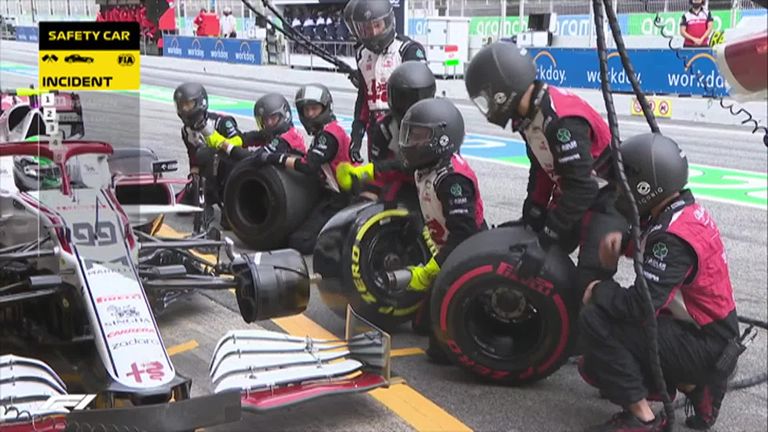 After another impressive Saturday - outqualifying Kimi Raikkonen for the third time this season - Antonio Giovinazzi had a dismal Sunday. A less-than-ideal getaway didn't help matters, but Giovinazzi can't be faulted for the bizarre pit-stop that lost him plenty of positions, and time, as Alfa Romeo identified a puncture on one of his 'new' tyres. After that, the Italian said: "15th was as far as I could go."

Outqualified by Haas (Mick Schumacher) for the first time this season, Latifi joined team-mate George Russell in pitting under the Tsunoda-triggered Safety Car but wasn't quite as potent as Russell on his first set of softs and had to pit again with 15 laps of his race to go. "Even though the pace isn't where we want it to be, I'm happy that the most important session of the weekend was the one that the car felt best in," reported the Canadian.

Seventeenth place isn't reflective of Fernando Alonso's Spanish GP, with the home favourite having ran up in 10th up until lap 60 of 66 before losing positions on old, old tyres. A subsequent pit-stop dropped him down the order. But Alonso will be slightly concerned by his qualifying form as while he made Q3 - he was outpaced by more than half a second by Ocon in Barcelona.

Beating his team-mate remains Mick Schumacher's most obvious barometer of success at Haas right now and he did so handsomely in Spain. His advantage over Nikita Mazepin was 0.7s in qualifying - a lap which saw Schumacher get off the back row for the first time on pure performance at Latifi's expense - and 50s across the 64 laps the Haas cars completed in the race. A slightly-over-exuberant pit box entry certainly caught his front jack man's attention, with the Haas able to continue on its way without delay.

Another difficult weekend for Nikita Mazepin. As well as being dominated by Mick Schumacher again in qualifying - with a 0.690s margin - Mazepin picked up a penalty in that session for blocking Lando Norris. He then ran at the back for all but two laps of the race, during which he was subject to the complaints of Mercedes' Toto Wolff for not moving out the way of the leader sooner. 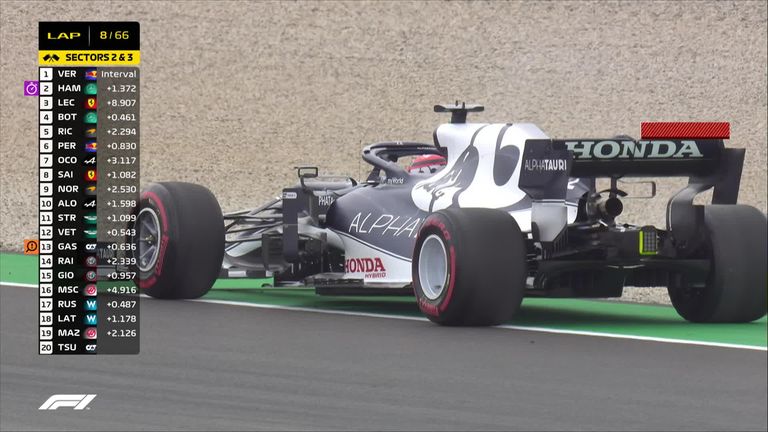 The fuel pressure issue that stopped his car when running 16th on the race's sixth lap meant Yuki Tsunoda didn't have the opportunity to make up for the events of Saturday, when he dropped out in Q1 and then voiced his frustration with his car over the radio and in subsequent TV interviews. Later apologised to the team for the outburst and will head to Monaco now aiming to get a rookie season that started so promisingly in Bahrain back on track.