Rating all 20 drivers from the first race in Austria as Max Verstappen continues his F1 2021 momentum ahead of Lewis Hamilton, while Lando Norris, Carlos Sainz and George Russell all shine

Verstappen looked faster than any other driver from Friday practice right through to his slightly controversial tyre burnout across the finishing line - and the Dutchman was afforded that winning celebration after converting his 0.2s qualifying advantage into a comfortable race.

Lewis Hamilton may say Red Bull have the quicker car at the moment but that only seems to be the case in Verstappen's hands, and that 18-point advantage now seems rather ominous for his rivals.

It's rare to see Lewis Hamilton finish second in a race but never look a contender for the win, but that is exactly what happened at the Styrian GP.

Qualifying third but lifted to the front row thanks to Valtteri Bottas' penalty, Hamilton could not make the most of that position into Turn 1, and that was as close to he got to the unstoppable Verstappen on Sunday.

Pushing the limits of a Mercedes car he stressed was up to 0.3s slower than the Red Bull on the straights, Hamilton had an almighty wobble on the exit of Turn 4 - which was about the most exciting thing to happen to him in an unusually "lonely" race. At least he picked up the fastest lap bonus point, but Hamilton certainly looks up against it in the title fight.

How Valtteri Bottas must be ruing that practice pit-lane spin. Without that, Bottas could very well have had the edge on his Mercedes team-mate for second place after out-qualifying Hamilton, but instead the Finn had to settle for third place.

That was still good going in the circumstances though, as Bottas - after getting past Lando Norris - capitalised on Red Bull's rare poor pit-stop on Sergio Perez's car and then held off a charging Mexican driver following his second stop.

Sergio Perez never quite looked on top form throughout the weekend but was unlucky not to secure a podium in the end after Red Bull's pit-stop blunder wiped out what was a fairly comfortable buffer to Bottas behind.

Perez will be disappointed in failing to make a first-lap pass on Lando Norris stick as with that, his advantage over Bottas would likely have been much bigger before the first stops.

It was a valiant effort to chase down the Mercedes after his second stop, but not quite enough for a driver who is still coming to grips with the RB16 car, and who you would expect would be much more competitive at the same track next weekend.

His third fifth place in a row, it may not now be a surprise to see Lando Norris dominate his midfield rivals - but this run of form is still mightily impressive for a driver who is right with Verstappen in the discussion for star of the season so far.

Key to Norris' superb result was his qualifying lap to fourth - ahead of a Red Bull - which then became third on the grid. He kept Perez and Bottas behind him for as long as he could before sensibly letting them through, and he was so far ahead of his rivals that this was one of his more comfortable F1 races.

A disappointing Saturday became a super Sunday for Carlos Sainz as he rose six positions from his starting position in the race. Perhaps Ferrari, after the woes of France, concentrated more on race pace than qualifying in Austria as Sainz was mighty over both his stints, running long before his first stop and then picking off his rivals on softer tyres.

Finishing ahead of Leclerc, Ferrari could not ask for much more from their 2021 signing, who is starting to look right at home.

Nobody had a more incident-packed and controversial Styrian GP than Charles Leclerc, who went from a very clumsy mistake to "one of my best performances" in F1.

After qualifying well in the Ferrari, Leclerc has to take full responsibility for his nudge into Gasly after Turn 1 as the Monegasque veered slightly right into his midfield rival, causing a puncture and suffering front wing damage of his own in the process. From there, it was an impressive if still rather dicey recovery, as Leclerc feistily overtook other drivers while still making contact with Kimi Raikkonen and Fernando Alonso along the way.

His race pace suggested he could have been in the running for fifth without his first lap incident, and Leclerc was rather lucky to avoid a penalty for Lap 1, and to be awarded Driver of the Day.

A very impressive weekend from Lance Stroll as the Canadian bounced back from three successive defeats to Sebastian Vettel to outpace his in-form team-mate in Austria.

Stroll made it through to Q3 for just the third time this season in his Aston Martin and then made up to sixth from ninth on the first lap, with a superb overtake around the outside of Turn 6 hailed as the move of the day by Sky F1's Anthony Davidson. That turned out to be key, as Stroll - while unable to keep the faster Ferraris at bay - ended up just ahead of Alonso at the chequered flag.

A decent result in the circumstances for Fernando Alonso, who beat Esteban Ocon again, qualified into Q3 for the third weekend in a row and secured ninth despite admitting his Alpine did not quite have top-10 pace. Alonso is certainly starting to display some of his form of old, although he could do with some progress from his team as ninth was about the best he could hope for on Sunday.

You never quite know what you are going to get with Yuki Tsunoda, but this was a much smoother weekend for the rookie - even though the pace of the AlphaTauri car deserved more than a singular point.

Tsunoda avoided a crash in Austria but was handed a grid penalty in qualifying after blocking Valtteri Bottas, which dropped him from eighth to 11th. That was a pivotal moment for his weekend as Tsunoda could and should have been fighting the Ferraris on Sunday, but was in the end scrapping with Stroll and Alonso - who he could not get ahead of despite the pace advantage.

OUT OF THE POINTS

The biggest mover on race day, Kimi Raikkonen quietly went about his business as he executed a hard-to-medium strategy to defeat what you would have to class as faster rivals behind him. This was Raikkonen's third 11th-placed finish of the season, although his qualifying has to improve - he has only outpaced Antonio Giovinazzi twice on a 2021 Saturday.

Sebastian Vettel's three-race purple patch came to an end with a tough Stryian GP, with the multiple world champion off the pace compared to Lance Stroll and, while in the battle for points throughout the race, unable to pass cars as he struggled towards the end of his stints. 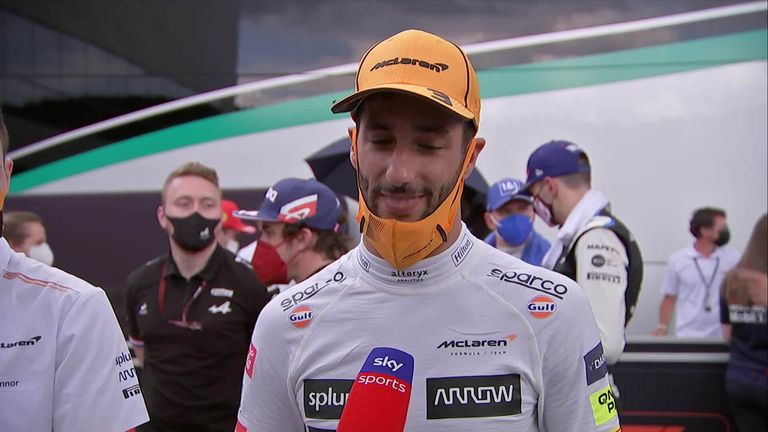 Just when it looked like the Australian had made up for his poor qualifying when gaining four places to ninth on the first lap, a cruel loss-of-power on his McLaren dropped him back to where he started. While the issue was resolved via the steering wheel, Ricciardo could not finish higher than 13th.

"It's disheartening for sure," said Ricciardo. "I was ahead of Sainz on the same strategy who finished sixth, so I think we could have finished sixth today."

After four points finishes in a row that's now three straight point-less returns for Esteban Ocon, who had a pretty miserable weekend. The surprise casualty of Q1, Ocon said 14th was about the best he could hope for on Sunday in an Alpine car that is not looking quite as competitive as it was a month ago. Antonio Giovinazzi is not getting the returns for what is a quietly impressive 2021 season so far. The Italian outqualified Raikkonen for the sixth time this season but then was inadvertently caught up in the Leclerc-Gasly drama at the start and was then sent spinning. He recovered to 14th, although was overtaken by Ocon late on.

Mick Schumacher kept up his qualifying streak over Nikita Mazepin - although only be a 10th at the weekend - and then had another ding-dong battle early on with his team-mate in the race, overtaking him before a lock-up. He got back ahead after a longer first stint, and also beat the Williams of Nicholas Latifi.

"I think we can be happy with what we did today," said Mick.

Nicholas Latifi deserved a little more than 17th at the Styrian GP. While off the pace compared to Russell, he had a decent qualifying - just missing out on Q2 as he beat Ocon and Raikkonen - but his race was then ruined as he was hit by Gasly's limping AlphaTauri. That forced him into a two-stop strategy, and he only managed to pass Mazepin.

Nikita Mazepin once again propped the field but he is at least getting a lot closer to Schumacher, while also avoiding the big mistakes that plagued the start of his rookie season. Although that did not prevent his team boss handing him a 'Mazespin' T-shirt... 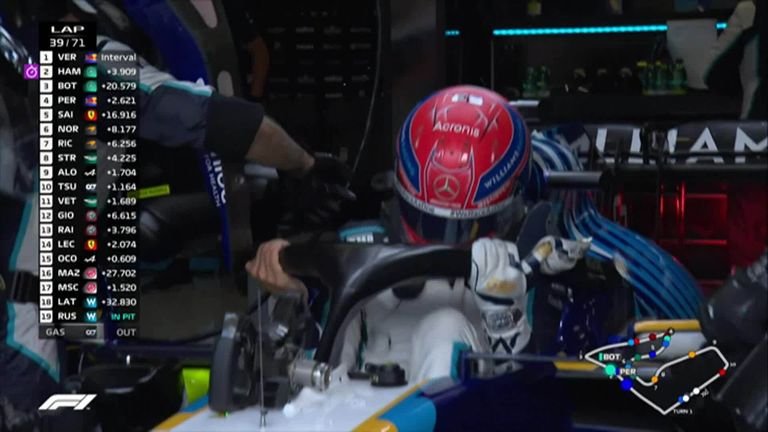 "Racing can be brutal". Indeed it can, George Russell.

Russell is a driver who, as well as barely putting a wheel out of place over three years at Williams, has also displayed immense pace considering the tools at his disposal and the Styrian GP was arguably his most competitive weekend with the team, just missing out on Q3 and then running up in eighth, on merit, in the race.

Then came a Power Unit issue, two pit-stops, and a race retirement. "This one hurt," added Russell after the race, although surely brighter days are on the way for the young Brit.

Pierre Gasly's Styrian GP was ended through no fault of his own as he picked up a puncture from Charles Leclerc's front wing on the first lap. Such a shame for the Frenchman who once again starred in qualifying and could very well have challenged Norris in the race.