Verstappen and Hamilton crash out together after tangle battling at Monza's chicane; McLaren win for the first time since 2012 with Daniel Ricciardo, who led after overtaking Verstappen at the start, finishing ahead of team-mate Lando Norris; Stewards hand Verstappen Russia grid penalty

Hamilton and Verstappen's races ended in the gravel at the first chicane after a bizarre and frightening clash on lap 26 as the Red Bull attempted to overtake the Mercedes.

Both had just lost ground at slow pit stops and suddenly found themselves battling for position into Monza's tight right-left opening corner.

The oncoming Verstappen attempted to go around the outside of Hamilton in the braking zone, which put him on the inside for the left-hander on exit, but the two cars met in the middle after the Dutchman went over the orange 'sausage kerb'.

Making contact, the Red Bull was lifted with all four wheels off the ground, with its rear wheel swiping the rear of the Mercedes, making contact with the safety roll-hoop and halo head-protection device.

Following a post-race investigation, stewards ruled that Verstappen was "predominantly to blame" for the collision and handed the driver a three-place grid penalty for the next F1 race, in Russia on September 26.

Both drivers again pointed the finger of blame at each other in post-race interviews.

Verstappen had lost the lead from pole to the fast-starting Ricciardo, who drove sensationally all afternoon and was still ahead when the warring championship contenders dropped out. It is McLaren's first win since the 2012 Brazilian GP, 170 grands prix ago, and Ricciardo's first since Monaco 2018 for Red Bull.

"To anyone who thought I left, I never left, I just moved aside for a while," said the now eight-time race winner Ricciardo after a difficult start to his McLaren career. 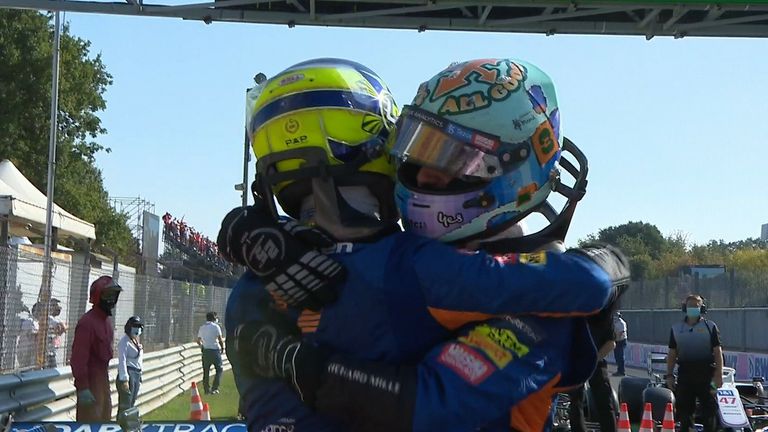 Red Bull's Sergio Perez finished third on the road but dropped to fifth after a five-second time penalty was imposed on him for leaving the track and gaining an advantage in a battle with Leclerc.

Valtteri Bottas, Saturday's sprint winner, took over the third position after a fine recovery drive from 19th place following engine penalties. But the time spent behind Perez cost the Finn a shot at the McLarens.

Leclerc got back ahead of Perez in the final classification courtesy of the Mexican's penalty, with Ferrari team-mate Carlos Sainz in sixth.

Full result from the Italian GP

Hamilton vs Verstappen: What happened and who said what?

While the jury may remain out on the sport's trial format for select events in season, coincidentally or not they have certainly ended up producing the biggest two moments of the gripping season so far.

Just eight weeks after Silverstone, when the rivals collided at high-speed on the opening lap at Copse with Verstappen crashing into the barriers, they tangled at relatively low speed in pursuit of victory at a fabled Monza circuit that has a habit for high drama.

The incident came on lap 26 as Hamilton exited his pit stop. The Mercedes service that had lasted a slightly sluggish four seconds and dropped the world champion back behind Norris, who he had finally just overtaken before the stops.

Things had been even worse for Verstappen. Running a close second to Ricciardo, a rare pit-stop shocker for Red Bull meant the Dutchman had spent 11 seconds in the box before joining the track, costing him places.

As Hamilton rejoined the action back behind the second McLaren, Verstappen was powering down the long pit straight and went left as Hamilton defended on the right into the Rettifilo chicane. No joy there for the Dutchman, but the line put him on a tighter inside for the next corner and he went for a second attempt at the move.

What the drivers said:
Hamilton: "I made sure I let a car's width on the outside to him. I went into Turn One and I was ahead, I was ahead going into Turn Two, then all of a sudden he was on top of me.

"Exactly the same scenario that happened in Turn 4 [on the first lap], where I went around the outside, I was in exactly the same position, but I gave way. And that's racing. He just didn't want to give way today, he knew when he was going into Turn 2 what was going to happen, he knew he was going over the kerb but still did it. We'll speak to the stewards and we'll see.

"He just kept on pushing me wider and wider and at one point there was nowhere to go, he just pushed me onto the sausage kerb. That's why, at the end of the day, we touched, because the rear tyre bumped up to his tyre."

What the team bosses said:
Toto Wolff, Mercedes: "I think in football you'd say it was a tactical foul. He [Verstappen] probably knew that if Lewis stays ahead, that is the race win possibly."

Christian Horner, Red Bull: "Max had the momentum. He had enough space around the outside, I think Lewis gave enough through the run into Turn One and I think our opinion would be that Lewis perhaps closed him too much into Turn Two."

Brilliant Ricciardo takes McLaren back to the top

While the collision and fallout will inevitably dominate sporting headlines for the weeks, McLaren's return to the top of the podium was a top story in its own right. Plus a heart-warming one from the perspective of driver and team.

Significantly, Ricciardo's victory was neither inherited nor fortunate. It was therefore a fitting way to banish what had been a tricky start to his career at the team he joined in January, with the season at the team hitherto largely belonging to the brilliant Norris.

"It's actually probably the first time I've been overwhelmed by winning," said Ricciardo to Sky F1.

"I think as well because it's been over three years. Not that this affects me, but I just know that no one would have expected this to happen this year, especially after the first half of the year.

"To be the guy to get the first win for the team in nine years is pretty special. I'll take that."