Lando Norris slid off from lead with three laps to go after attempting to stay out on dry tyres as rain arrived in Sochi; Norris insists it was his decision to try and hold onto lead; Andreas Seidl admits in hindsight McLaren should have overruled 21-year-old.

Lando Norris was "devastated" to miss out on a maiden Formula 1 win as he and McLaren were left to rue the "wrong decision" to stay out on dry tyres as the Russian GP ended in heavy rain.

But the 21-year-old Briton insisted it had been his call to try and see out the lead he had held for much of the race as those behind pitted for intermediate tyres.

It proved to be a catastrophic error of judgement as the rain intensified, resulting in Norris sliding off track on lap 51 of 53 and Lewis Hamilton - who had remerged 25 seconds behind McLaren after pitting for intermediates - taking his 100th Grand Prix win.

Norris eventually came home in seventh, escaping with a reprimand from the stewards after sliding over the pit entry line as he finally attempted to pit for wet tyres.

"We made a call to stay out and we stand by that. It was the wrong one at the end of the day but I made the decision just as much as the team. It was more that they thought I should box and I decided to stay out.

"It was my decision, I thought it was the way to go."

He later told Natalie Pinkham and Johnny Herbert: "The team told me what was going on and I made the decision. I said I want to stay out, so it's not the team's fault.

"I made my decisions and they told me it was only going to be drizzling like it was for those first five laps, but it rained a lot more. That's something we didn't know for some reason, Mercedes seemed to know it was going to rain a lot more, it's something I'll talk to the team about.

"At that point it wasn't a risk, we were making a correct decision, but for some reason not seeing the rain or not knowing it was going to get a lot harder was the thing that caught us out."

Hamilton to Norris: I didn't want to come in either

Norris had appeared in control after holding off a charging Hamilton to maintain around a second advantage over the seven-time world champion.

When the rain came, Norris twice ran wide at Turn Five but was able to return to track and remain ahead of Hamilton, and the Mercedes driver also initially ignored his team's call for him to pit for intermediates.

Hamilton: "Lando, you didn't want to come in? Me neither, I was like 'he's right there'."

Norris: "Until then it was dry enough for slicks. It was tricky between turns five and seven but this side was all dry. I was told the rain was going to stay like that, apparently what you got told was different."

Hamilton: "Yeah my team were great today. I ignored the first call."

Norris: "I ignored the whole time."

Norris: Had rain stayed the same we'd have been fine

Norris admitted the decision whether to switch tyres had been complicated by being so close to the end of the race, and says it was the sudden increase in rain intensity that had caught him and McLaren out.

"I felt like I did everything I could, even when it got a bit tricky at the end. I made a couple of mistakes but still kept Lewis behind and managed to pull away a little bit," he said.

"A bit of luck like the laps I was out before Lewis boxed was perfectly fine for the tyres I was on and I got told the rain was going to stay the same amount. Had it stayed the same amount we had the right decision, but it obviously got a lot wetter than we as a team expected.

"When it's only two laps to go, when there are 20 to go you're maybe not as aggressive with decisions. We did what we thought was right, which I'm happy with. It was wrong at the end of the day but everything until then the guys did an excellent job. I'm happy with everything apart from that one decision which we'll review and try not to make again."

Seidl: McLaren will learn from decision 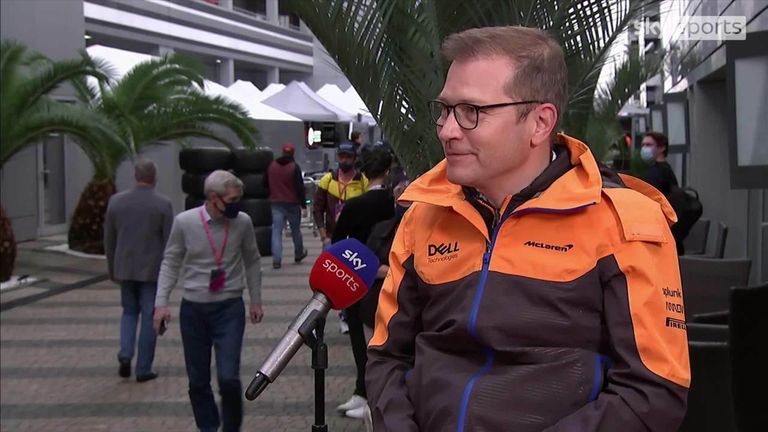 McLaren team principal Andreas Seidl conceded that with hindsight they had made the wrong decision to stay out and not overrule Norris' desire to stick it out like Mercedes had done with Hamilton.

"In hindsight, it's always easy to judge what we could've done differently. We didn't get it together as a team in hindsight, it was the wrong decision to stay out, but it's part of the sport," he told Sky Sports F1.

"He's long enough in this sport now to know it's part of the game, part of the learning. But not just on his side, but on the team side as well because I think there is always a chance to overrule him from the pit wall side with the information we are having. In the end, together we made this call to stay out. On Lewis' side we heard the discussions as well, it was pretty much the same ongoing and on Lewis' side he had the chance to wait to see what we are doing and do the opposite because he was in P2. We didn't have this opportunity.

"We wanted to go for the win, that's why we decided together to stay out and it just didn't work out."

He added: "We finish P7 so we regret it at the moment. It's a decision you make together, the driver and the pit wall. The result is we didn't get it together today compared to some other teams. We shall analyse it, learn from it and try and do better next time."