The verdict - coupled with Lewis Hamilton's disqualification from qualifying for a DRS breach on his Mercedes - means Verstappen has inherited first on the grid for tonight's Sprint at Interlagos.

Hamilton, who qualified top, learned his fate shortly after Verstappen and will start at the very back of the grid in another huge blow to his title chances, with another five-place grid penalty to follow for Sunday's race.

Verstappen leads Hamilton by 19 points, with 29 points to play for this weekend.

What did the stewards rule on Verstappen?

After lengthy analysis, which started late on Friday night and delved into videos from social media and car cameras, Verstappen was found to be in breach of Article 2.5.1 of F1's Sporting Code, which is that "no operation, checking, tuning or repair is allowed" by non-officials when cars are in parc ferme after qualifying.

Verstappen did touch Hamilton's rear wing, the stewards said, but they crucially ruled that "there was insignificant force when Verstappen touched the wing".

The stewards added that it had "become a habit" for the drivers to touch each other's cars after qualifying and the races, and in Verstappen's case he touched an area of Hamilton's car "which has been a point of speculation in recent races" between Mercedes and Red Bull.

While they said the rules breach had a "significant potential to cause harm" they ruled that no harm was caused, but still ordered a fine of €50,000 (£42,681) for Verstappen and warned teams and drivers about similar future offences.

What does the verdict mean for the Sprint?

It means Verstappen has a huge advantage, with three points on offer for the winner of the 24-lap race - which starts at 7.30pm live on Sky Sports F1. Hamilton, meanwhile, will be lucky just to get back to the top-10.

With Hamilton to start Sunday's race five places lower than he finishes tonight due to a separate engine penalty, Verstappen can land a big and possibly decisive blow in the championship with only three races to go after Sunday. 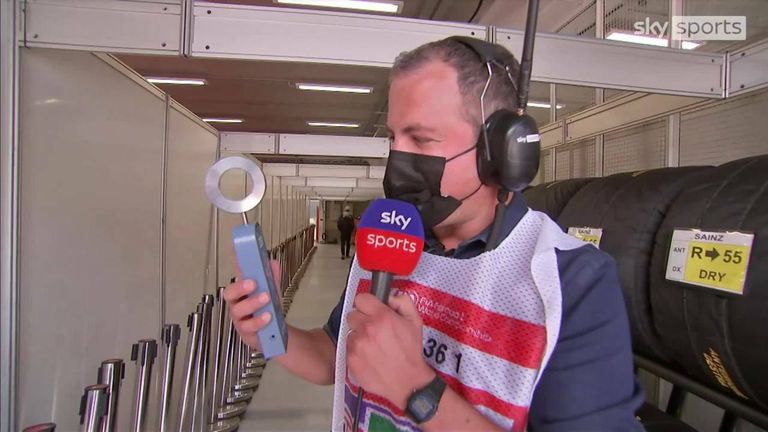 Speaking before the verdict, Red Bull Christian Horner said he would be "amazed" if Verstappen got a penalty.

"I think obviously Mercedes' straight line speed is very impressive, so I think he's maybe just having a look at that," Horner told Sky F1. Drivers are very inquisitive animals sometimes. We've seen it many, many times."

The new starting top 10 for the Sprint is as follows:

The Stewards' verdict in full

"The stewards also examined a fan video taken across the track, CCTV footage taken from pit lane and in car footage from car 14, car 33, car 44 and car 77. In all, these videos gave a clear picture of what occurred in parc ferme following the qualifying session.

"Verstappen exits the car, then moves to the rear of his car. He then takes his gloves off and puts his right hand at the slot-gap of the rear wing of his car. He then moves to car 44 and repeats the exercise, touching the rear wing in two places, once on either side of the DRS activation device, but on the bottom rear side of the wing, in the area of the slot gap and never near the actuator of the end fixation points.

"It is clear to the stewards that it has become a habit of the drivers to touch cars after qualifying and the races. This was also the explanation of Verstappen, that it was simply habit to touch this area of the car which has been a point of speculation in recent races between both teams. This general tendency has been seen as mostly harmless and so has not been uniformly policed. Nevertheless, it is a breach of the parc ferme regulation and has significant potential to cause harm.

"Considering the fact that no direct harm was caused in the case, in the opinion of the stewards, and that no earlier precedent of penalties for this exists - on the one hand; but that it is a breach of the regulation and has potential for serious consequences on the other., the stewards determine to take action in this case and order a fine of €50,000. The stewards further note that it is intended that all teams and drivers take notice that future breaches may incur different penalties from the stewards of these events."