Lewis Hamilton delivered one of the comeback drives of his career at the Sao Paulo GP to charge through the field from 10th to clinch a huge win, overtaking Max Verstappen after a fierce battle to cut his rival's title lead.

It was a dramatic turnaround on a rollercoaster weekend for Hamilton, after suffering a qualifying disqualification and an engine penalty, and he capped his display by defeating Verstappen in another epic wheel-to-wheel duel.

Hamilton, having soared through the field in the early stages, and Verstappen, after passing Valtteri Bottas for the lead at the start, were head to head for much of the race and the Dutchman angered Hamilton and Mercedes with a questionable defence into Turn 4 on Lap 48.

The stewards decided no investigation was necessary but 11 laps later Hamilton, in a much faster Mercedes, finally executed that move and passed Verstappen for a much-needed victory at Interlagos.

He is now 14 points behind Verstappen with three races remaining in the 2021 season; in Qatar, Saudi Arabia and Abu Dhabi.

"Coming into this weekend I never ever thought we would be able to close the gap like we had today," said Hamilton, who enjoyed huge support from the Brazil fans.

"Then these things that just kept going against us but it really shows for everyone, never give up. Never, ever stop fighting and that's how I've really approached this weekend."

It was Hamilton's first win in four races and only the second of his 101 F1 victories that came from lower than sixth on the grid. Toto Wolff called it the most satisfying win from his time in charge of Mercedes.

Three to go: How it stands in the title chases

Verstappen meanwhile described his second place "damage limitation" and, while Mercedes have moved further ahead of Red Bull in the team standings with Bottas third, Sergio Perez took a fastest lap point off Hamilton from fourth. 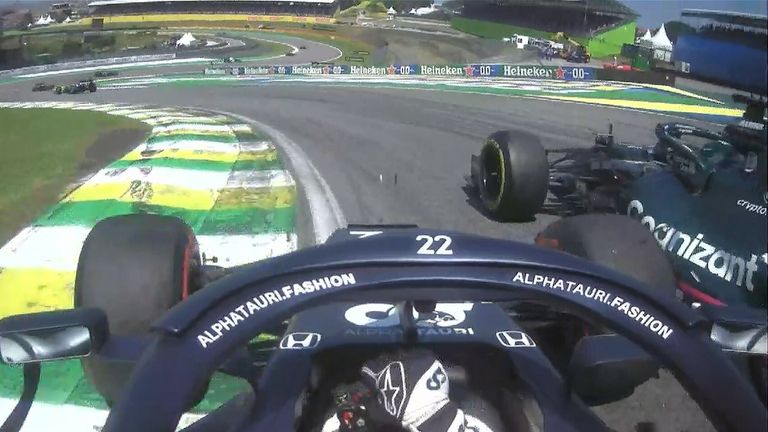 The Ferraris of Charles Leclerc and Carlos Sainz were fifth and sixth but there was plenty of drama behind, with Lando Norris suffering a first-lap puncture while Yuki Tsunoda and Lance Stroll's collision caused an early Safety Car.

Daniel Ricciardo retired from the race on a disappointing and a potentially pivotal day for McLaren in their battle against Ferrari, with Norris eventually recovering for a single point behind both Alpine cars.

How Hamilton completed epic charge and why Verstappen irked Mercedes

"From last on the grid and then another five-place penalty I think was the hardest weekend I've had," said Hamilton, who was 20th for Saturday's Sprint and then, after recovering to fifth, took another grid drop for Sunday.

But he put all that behind him to take what Sky Sports F1's David Croft hailed as "one of the great Formula 1 victories of all time."

The scene was set for another Verstappen vs Hamilton battle early on as Verstappen passed Bottas into Turn 1, while Hamilton immediately moved up to sixth. A few laps later and he was third, and was then given the boost of a Safety Car which wiped out the small buffer that the Red Bulls were able to build.

Perez, who had also overtaken Bottas on Lap 1, put up a fight but soon Hamilton was also ahead of him to ensure the top two in the championship were now the top two in the race. Bottas got back ahead of Perez after pitting under a Virtual Safety Car.

After an attempted undercut from Mercedes and an early second stop from Verstappen, the championship protagonists were back in their head-to-head battle again and with Hamilton's far superior straight-line speed, the Red Bull appeared to be a sitting duck as the Englishman came charging on Lap 48.

Hamilton moved around the outside and appeared to get slightly ahead of Verstappen but the title leader stuck to his line and both drivers ran wide and off the track. Sustained protests followed from Mercedes but while the incident was noted by stewards, they ruled that no investigation was necessary.

Hamilton slipped back a touch after that but finally broke Verstappen's resistance on Lap 59 after getting back into DRS range, forcing his rival to defend the inside into Turn 1 and then getting a better drive down to Turn 4.

Mission complete, and Verstappen was never going to fight back from there.