Stewards decide not to reopen the case into Max Verstappen's defensive driving at Interlagos after ruling new video evidence not "significant" to lead to prospect of a different decision; Mercedes say they expected result, but wanted to make point of "principle" and start discussion

A hearing featuring both teams took place on the opening day of the Qatar GP weekend and deliberations stretched into Friday, but stewards ruled that, while video footage released from on-board Max Verstappen's car on Tuesday was duly a 'new' and 'relevant' element in the case it did not satisfy the third criteria of also being 'significant'.

"The stewards determine that the footage shows nothing exceptional that is particularly different from the other angles that were available to them at the time," read the verdict. 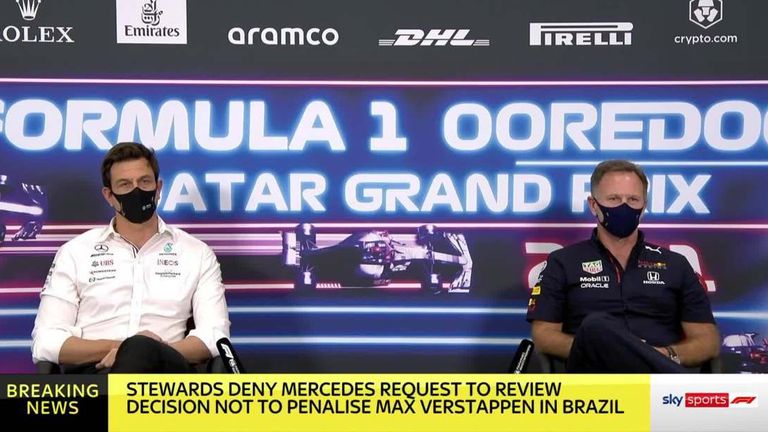 The lap-48 incident was 'noted' by Race Control but, after assessing the initial replays and angles available at the time during the race, they viewed it did not warrant further investigation for any possible penalty.

Hamilton won the race anyway after overtaking Verstappen 11 laps after the Turn Four controversy but any in-race penalty could have had an impact on whether he finished second or not.

Somewhat theatrically, the stewards' verdict on the matter was finally delivered while the Red Bull and Mercedes team bosses were sitting next to each other in what was already proving a tense team principals' press conference amid an increasingly acrimonious title fight.

"I was surprised at the hearing in the first place," said Red Bull's Christian Horner to Sky F1 in a later interview.

"We saw many incidents at Turn Four both in the sprint race and the actual grand prix that there was absolutely no action with.

"It was just two drivers obviously just outbraking themselves. If Lewis would have been smart he would have gone for the cut-back like Checo [Perez] did on Valtteri [Bottas]. The good thing is the book's closed on it and it's full focus on this weekend."

Mercedes boss Toto Wolff already said before the news was delivered that he was not expecting anything to change because of their challenge and, giving his response to the formal verdict, then said: "I think we always knew this was not going to go anywhere.

"We weren't sure whether it was going to stop at that stage, there is no right of review, or whether the review was rejected. That's fine but it's more the principle. Should there be decisions on that case? What is the interpretation of the stewards to such incidents. Now you have to move on and do the best possible job in this race and the next one."

Wolff added: "What have we achieved? I think we have achieved a public discussion around it because I see a risk that we will see it happening in the next races, it could well end up in the stewards' room or the court room if people aren't happy with how it is being raced out there."

What did Max and Lewis say about the incident?

Speaking while their respective teams were meeting with the stewards on Thursday, Verstappen and Hamilton each had their say on the events of last Sunday in their respective media sessions:

Verstappen: "As a driver, we know exactly what we can or cannot do in the car. We were fighting hard, braking late into the corner, the tyres are hot, and if I had turned more abrupt to the left you'd just spin off the track.

"That's why we are the drivers. We try to control the car."

Hamilton: "We've looked at it and have a different viewpoint naturally now, but I'm just putting all my energy into setting up the car and making sure I'm in the right headspace this weekend."

Saturday
10.45am: Practice Three Live (Session starts at 11am)