"It's been amazing to see the positive response," says F1's seven-time world champion after racing with the Progress Pride flag on his crash helmet in Qatar 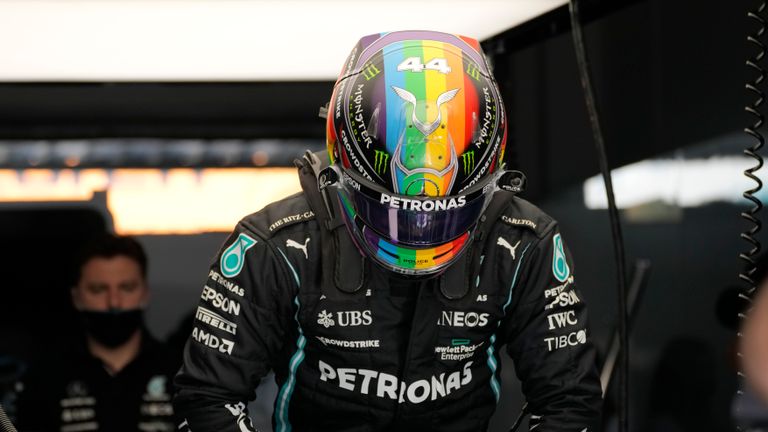 Showing his support for the LGBTQ+ community, Hamilton raced with the design during F1's inaugural event in Qatar, a country where same-sex relations are illegal.

Speaking to Sky Sports F1 after qualifying, Hamilton explained what led to the creation of the special design.

"For months now I've been thinking about these last three races and the location," said the Mercedes driver and seven-time world champion on the first leg of F1's conclusion to the season in the Middle East.

"Trying to educate myself on also the issues that we are surrounded by here. They are not small; they are big issues.

"I've been trying to think, 'what is it that I can do?'. I'm only one person; the sport and all the drivers together, and athletes, can do more.

"In the last race I finally came up with the idea and luckily in a really short space of time I got my helmet painter to send me a clip of this image with the flag over my helmet and I was like 'that's what I want for the next race so can you make it happen?'.

"He made it happen and it's been amazing to see the positive response."

Hamilton spoke ahead of the event about the need for sports organisations and sportspeople to speak out more on human rights issues.

The back of the crash helmet design contained the words 'We Stand Together'.

Hamilton added: "I hope there are kids here and whoever are watching asking what the flag is if they don't know, and why I'm wearing it.

"I hope it sparks positive conversation and change."

F1's boss on criticism of Qatar and Saudi Arabia races

Formula 1 next week heads to Saudi Arabia for the first time, a country that has also come under criticism for its human rights record.

In an interview with Sky's Rachel Brookes in Qatar, F1 president and CEO Stefano Domenicali explained the positive impact he feels the sport can achieve by being in such countries.