"For anyone who missed out on being too young in the Senna and Prost era, this is it. This is what you missed out on," says Sky F1's Anthony Davidson; penultimate round of season this week at new Saudi Arabian street track - Sunday's race live on Sky Sports F1 at 5.30pm

Formula 1's gripping Max Verstappen and Lewis Hamilton world title duel will finally be settled over the course of the next fortnight - and the rivalry that has defined the season already ranks up there with the sport's most famous, according to Sky F1's Anthony Davidson.

After eight months of drama, unpredictability and increasing tension, 2021's world champion will either be crowned at this week's inaugural Saudi Arabian GP - where Verstappen could clinch his maiden crown if Hamilton endures a difficult weekend - or at next week's season finale in Abu Dhabi in what could prove a winner-takes-all showdown.

"For anyone who missed out on being too young in the Senna and Prost era, this is it. This is what you missed out on. 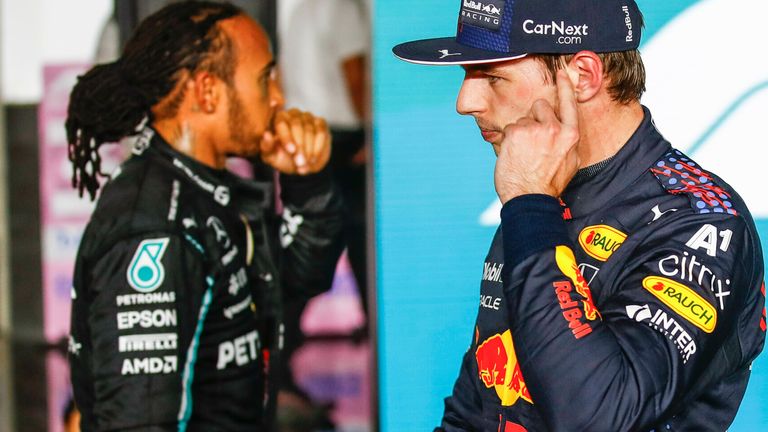 First as McLaren team-mates and then as rivals in opposing teams, the duels between Ayrton Senna and Alain Prost defined F1 in the late 1980s and early 1990s. Their most famous contests (1989 and 1990) were decided via acrimonious penultimate-round collisions in Japan.

Verstappen and Hamilton have had their own flashpoints already this season, including two controversial crashes, amid a battle between the drivers and their respective teams that has gripped the sport and global audiences.

"I'm loving it," admitted Hamilton after closing Verstappen's lead at the Qatar GP with his second win in a row.

"I love the close battle, and the pressure and the demands it puts on you and the whole team.

"I've thoroughly enjoyed it but these next two races need even better performance. We'll be bringing out triple-A game for those ones."

Having slipped 21 points behind Verstappen after the Saturday sprint in Brazil, Hamilton has raced into contention and added: "It's amazing to be able to close back so many points in these last two races. It has been important.

"They are obviously still very fast and [in the race in Qatar] both their cars were getting past everyone quite easily. So, we've still got our work cut out."

While recent momentum has been with his Mercedes rival, Verstappen still crucially holds a points lead and would even be champion for the first time by Sunday night if he outscores Hamilton by 18 points.

"I would of course have liked to make it a bigger gap," said the Dutchman.

"But when you don't have the pace, it's impossible to do that, so we'll just try to be better, and come back strong, especially in Saudi on the street track, and then yeah, we'll see in Abu Dhabi."