Zhou Guanyu's new contract at Alfa Romeo means there are three seats remaining on the 2023 Formula 1 grid, at Alpine, Williams and Haas; Alpine are targeting AlphaTauri's Pierre Gasly, while there are several contenders for the other spots...

Zhou Guanyu's contract renewal at Alfa Romeo has closed another door in Formula 1's 2023 driver market - and made the remaining seats all the more appealing for the established, and emerging, stars in the running.

As a competitive market continues to take shape deep into the 2022 season, we've rounded up the runners and riders for each of the seats as we edge closer to a full confirmed grid...

After being shocked by Fernando Alonso and snubbed by Oscar Piastri, Alpine said they had a shortlist of "14 drivers" for what is the best available seat in 2023. But in truth, their eyes have always been fixed on Pierre Gasly.

Gasly makes sense for a lot of reasons. He's French, still young (26) but with five seasons, and a race win, under his belt, and would likely hit the ground running to form a very handy line-up with Esteban Ocon.

The one problem is, he's contracted to Red Bull and is a key part of their sister team AlphaTauri. 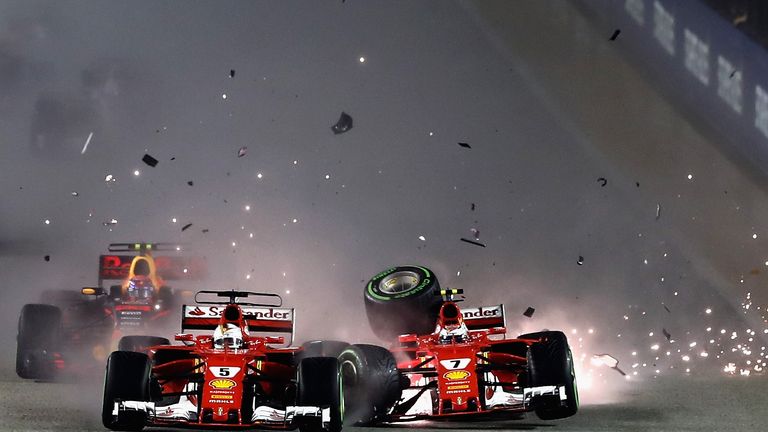 Red Bull are open to parting ways with Gasly - for a fee - but would want an adequate replacement first (which we'll come on to in the next section).

Alpine, therefore, have to have some alternatives.

Perhaps nervous of another driver market sucker punch by missing out on Gasly, they tested three drivers in a 2021 Alpine car last week at the Hungaroring, Nyck de Vries, Jack Doohan and Antonio Giovinazzi.

De Vries is one of the hot commodities of his year's driver market while Giovinazzi would more likely stay within the Ferrari family to get back into F1, but it would not be a surprise if Doohan is very high up on Alpine's list.

Alpine have been keen to promote from their driver academy for some time (with Piastri always the favourite), but Australian driver Doohan is currently fourth in his first full season in Formula 2 and is highly rated internally.

Daniel Ricciardo and Mick Schumacher are true outsiders for this seat.

Ricciardo hasn't been really mentioned by Alpine since early August, with Renault bosses thought to be uneasy about bringing back the 33-year-old, while Schumacher probably hasn't done enough at Haas to earn a promotion up the grid.

AlphaTauri would ideally want Gasly, who only signed a new contract for 2023 in June, to stay. But with Gasly unlikely to get a step up back to Red Bull anytime soon - he didn't impress the team in his brief spell in 2019 and Sergio Perez is locked in for multiple years - the senior team may try and get compensation for the Frenchman while they can.

This has always been dependent on finding a replacement, and with no junior drivers making their case to be F1's next star to come through the Red Bull programme, they have been looking further afield.

IndyCar star Colton Herta was their number one target, although - despite winning seven races in the top US single-seater championship - he doesn't have enough superlicense points.

That collapse appeared to point towards Gasly staying put, but a new frontrunner has emerged... that man De Vries.

De Vries, while never having raced in F1, would fit Red Bull and AlphaTauri's desire for a proven driver to come in for Gasly, and the Dutchman has admitted he has held talks with the team's transfer advisor Helmut Marko.

He seems to be their only fallback right now; if he doesn't sign, it's likely Gasly stays.

Haas are the wildcard in this driver market and it's been hard to predict what direction they are heading in.

What does seem certain is that the US team are seriously considering moving on from Schumacher for 2023, with the German driver having been out-performed by Kevin Magnussen this season. Schumacher is also set to leave the Ferrari driver programme, and his links to the Scuderia were one of the reasons he joined Haas in the first place.

Giovinazzi, the Ferrari reserve and man who was in truth unlucky to lose his Alfa Romeo seat this year, has been heavily linked with the team, as has another former F1 driver Nico Hulkenberg.

Those reports suggest Haas want an experienced line-up next year, and aren't interested in a rookie.

In which case, Ricciardo also can't be ruled out, and team boss Guenther Steiner has hinted at interest and talks.

Ricciardo would be the headline signing Haas have been waiting for since their F1 debut six years ago, and would be a big hit Stateside. However, it remains to be seen whether they would have the budget or pedigree to attract Ricciardo, who has made it clear he is more than happy to take a year on the sidelines in 2023 if the right opportunity doesn't present itself.

Nicholas Latifi's impending exit leaves an opening at Williams, whose movements could depend on how the dominoes fall in the driver market.

Given his pedigree, and more importantly, how well he performed in Alex Albon's absence in Italy, De Vries would surely be Williams' preferred choice. They may be beaten out in this race by teams further up the grid, although perhaps they can lean on their relationship with Mercedes to secure the services of their reserve.

Other than De Vries, Logan Sargeant is the name that has cropped up most in links with Williams.

American driver Sargeant is a Williams junior and is third in the F2 standings. He is well thought of at Williams, who have American owners, and will make his practice debut for the team at the United States GP next month.

Schumacher could be a driver of interest should he leave Haas - he has done enough in his two years in F1 to prove he belongs - while Giovinazzi fits that bill of a solid driver alongside Albon, too.

The reality is the 2023 grid is still incredibly difficult to predict, even at this late stage of the season. There are, however, expected to be significant developments in the coming weeks.