Lewis Hamilton recognises long F1 road back for Mercedes vs Red Bull and Ferrari: 'We have to dig deeper'

Mercedes haven't won a race this year and are planning a significant car change for 2023 in bid to catch up to rivals; "We've had to take a step back and switch gears and go in a different direction," Lewis Hamilton tells Sky Sports F1

Lewis Hamilton has highlighted Mercedes' huge off-season as they bid to get back into Formula 1 contention, admitting the team have to "dig deeper" and "go in a different direction" to catch up to Red Bull and Ferrari.

Mercedes, having gone from eight straight world constructors' championships to falling well behind their rivals following the major rules overhaul, are planning for a significant re-design of their car for 2023 to try and reverse their slump.

It is not a decision Mercedes wanted to make, more one that was necessary with their W13 car still yet to pick up a single victory from this season's first 18 races. Hamilton's fierce rival from last year, Max Verstappen, meanwhile, has already wrapped up the drivers' title.

The seven-time world champion, speaking to Sky Sports F1's Naomi Schiff in Singapore, said the team have "mixed feelings" about the change in approach.

"From being here for such a long time, knowing how long it takes to change things, knowing how long the processes are, the decisions have to be actioned months in advance of the direction that you're going," Hamilton said.

"You're continuously collating data and getting different bits of information that can alter those along the way.

"One thing is that I have 1,000 per cent confidence in my team. I would say just with how the rules are, I know it can be tough for everybody.

"Everyone is going to have to dig even deeper during these next six months, and it's not going to be easy, but I feel like everyone's up to the challenge, up to the task."

Red Bull have won 14 of the season's 18 races and can clinch the constructors' title this weekend. Ferrari are in touching distance of Mercedes, although that is largely down to errors rather than similar pace on-track. 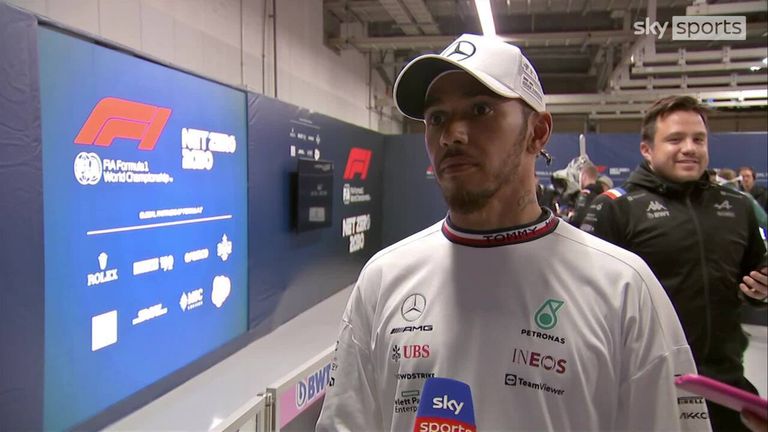 Hamilton therefore recognises how difficult a winter it will be before the 2023 season starts next March.

"If you look at Red Bull, they've got a car that's amazing. They've done an incredible job this year as a whole, every single individual there," Hamilton said. "So, their car will probably just continue to evolve, as probably will Ferrari's, although they've got some teething problems.

"Whereas we've had to take a step back and switch gears and go in a different direction and hope that we're on that right path to be able to get back engaged."

In the wide-ranging interview, which also saw Hamilton and Schiff talk in depth about their heritage, Black History Month and much more, Hamilton also said him helping the team with their underperforming car is a factor in him trailing new team-mate George Russell in the drivers' standings.

Russell, in fourth, leads Hamilton, in sixth, by 27 points.

"I think we've learnt so much through the data," said Hamilton.

"But for me that was about gaining knowledge for the team so they could literally tick off the box and say that does or doesn't work. I felt like that was really my role.

"Yes, I'm behind in points, but it's the bigger picture. I hope that that work will impact us better for not only the remaining races this year, but into next year, in terms of where we steer, because I'm a part of that rudder, in terms of steering us in the direction.

"I hope so much that we can fight back next year, and we just have to speak it, and work it, into existence."