Carlos Sainz made his first appearance as a Ferrari driver ahead of his new career in red, as his new team boss Mattia Binotto set the team's sights on recovering from their "inadequate" 2020 performance next season.

Five days after finishing his impressive two-year McLaren career by helping the Woking team clinch third place in the Constructors' Championship, Sainz was with his new team in Maranello for a factory tour, meetings with his new colleagues and to complete a seat fitting.

Appearing alongside his team boss Binotto and team-mate Charles Leclerc in an 'virtual' version of Ferrari's traditional Christmas media lunch, Sainz said in his new Ferrari colours: "My first time in red, which is obviously pretty special.

"It's a special day for me in general and it's probably a day I will never forget.

"Christmas and some holidays to disconnect and recharge the batteries as quick as possible, but you can be sure I'm going to be here pretty early in January to keep pushing and helping this team to move forward as quickly as possible in the best direction.

Having decided to jettison four-time world champion Sebastian Vettel and sign Sainz for next year before the delayed 2020 season had even begun, Ferrari committed to its youngest driver line-up since 1968.

"He is a fast driver and very strong," said Binotto of Sainz. "If you look at 2020 it was really a very good season.

"He has been even faster in qualifying [than previously]. He's a very strong racer.

"I'm expecting Carlos to be contributing to the Constructors' Championship."

Although the 26-year-old Sainz is older and more experienced than Leclerc, it is the latter who has established himself as Ferrari's lead driver against Vettel over the past two seasons and is on a longer deal than his new team-mate.

But Binotto stressed that "there is nothing written in the contract of Charles of him being the leader" and that the new team-mates would be "free to fight on track", with "equal opportunities, certainly at the start of the season".

Sainz will first drive a Ferrari car - their race-winning 2018 challenger - at their Fiorano test track in January as he works to acclimatise to the team's ways of working. Pre-season testing in Barcelona begins on March 1.

How quickly can Ferrari recover from their 'inadequate' 2020? 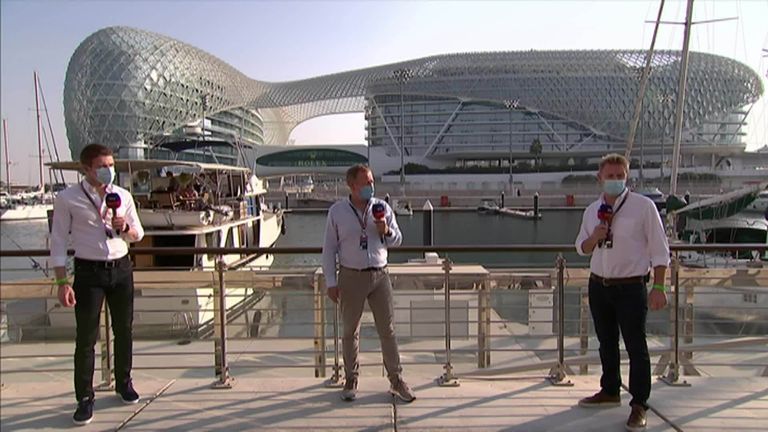 During the course of the hour-long video call, Binotto referenced on several occasions the fact that this year was the worst for Ferrari in F1 since 1980.

Sixth place in the constructors' standings represented a drop of four positions from 2019.

"It has been a very hard season, even harder than expected," admitted Binotto. "We knew the last winter that the car was not eventually performing as we were hoping.

"We understood very quickly during the winter testing that the car would not be fast enough but I don't think we were expecting such a difficult season, not only from the performance point of view but if we look back through all the Covid pandemic and all the situations we had to face.

"The level of our performance has been inadequate for what should be the standard for Ferrari. We are very disappointed for it, we feel the full responsibility, we are sorry for the company, we are obviously sorry for our fans. But I'm pretty sure that this year will make us stronger for the future."

Indeed, Binotto is optimistic that improvements - especially in engine performance, previously a Ferrari stronghold but hampered by FIA technical directives issued last winter - will allow them to improve their competitiveness.

"Third is not impossible, I think that should be our minimum objective for next season," he stated, while acknowledging that McLaren and Racing Point were likely to remain strong rivals for the position.

But, while backing his team, the Ferrari boss conceded that an immediate return to title-contending form was clearly not going to be likely in 2021.

"We need to be realistic," Binotto said. The gap to the best team today is very big. Who won today will again be very strong next year. Already during the season, I don't think they brought a lot of developments on track because they were certainly focused on 2021.

"So to say we can be back on track next year and to battle for the championship would be unrealistic.

"To say we can be back on track next year and to battle for the championship would be unrealistic," he stated.

Binotto also confirmed that Ferrari's 2021 car would be called the SF21. They car will be revealed around the time of winter testing, possibly at Barcelona, with an initial event earlier in the year to present their team.