Personnel from Mercedes team joined Hamilton in taking a knee pre-race; Eleven other drivers took a knee on the grid; Hamilton dominated Styrian GP and then performed Black Power salute on the podium 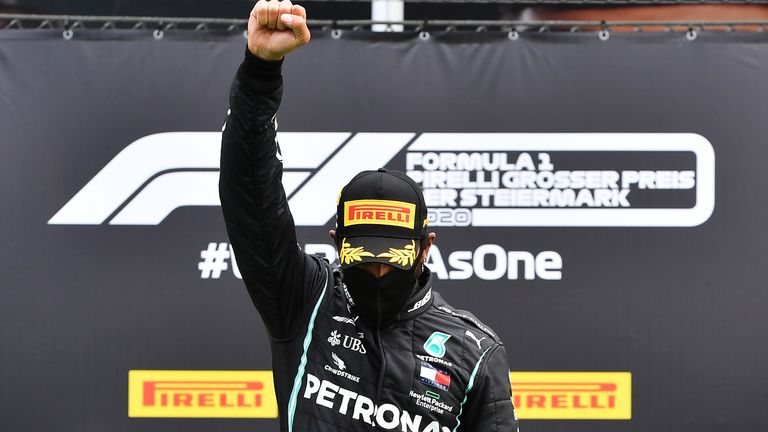 Lewis Hamilton says F1 must continue to do more to help drive conversation and change around equality, as he also reflected on a "beautiful" moment before his Styrian GP victory when Mercedes joined him in taking a knee.

After a dominant win in Sunday's race - the Mercedes driver's first of 2020 in the season's second event - Hamilton clenched his right fist in the air when he got out of the car, and then again on the podium, in a powerful Black Power salute.

With all drivers wearing anti-racism T-shirts for the second race in a row, Hamilton had earlier again taken a knee at the front of the grid alongside 11 other drivers before the race.

Four drivers stood, while four were not present, in pre-race scenes that promoted fresh debate about whether the gathering marked a sufficiently united show of solidarity.

We stand together ✊🏾 the team today took the knee which was just amazing to see that together we can learn and be open minded of what’s going on in the world. Thank you to everyone in my team and to you #TeamLH, I appreciate all of your support and your positive messages 🙏🏾 pic.twitter.com/zfKGdjDjce

Other F1 personnel also took a knee on the grid, including Hamilton's Mercedes team.

"We're learning along the way. I think this weekend the drivers spoke after the drivers' briefing about what we intended to do," said Hamilton of the pre-race gathering which was this week arranged by the drivers.

"The question was how long do we… some people were asking how long do we have to continue to do this? Some felt like one was enough last week and I just had to encourage them that racism is here, going to be here for probably longer than our time here, and people of colour who are subject to racism don't have time to take a moment to protest and that be it.

"We've got to continue to push for equality and really to continue to raise awareness of it, so I don't really know what else we can do moving forward, but for me to have Valtteri [Bottas] and my team also lining and acknowledging and kneeling before the start of the race I think was really huge and I'm incredibly grateful for their understanding and this contribution to it." 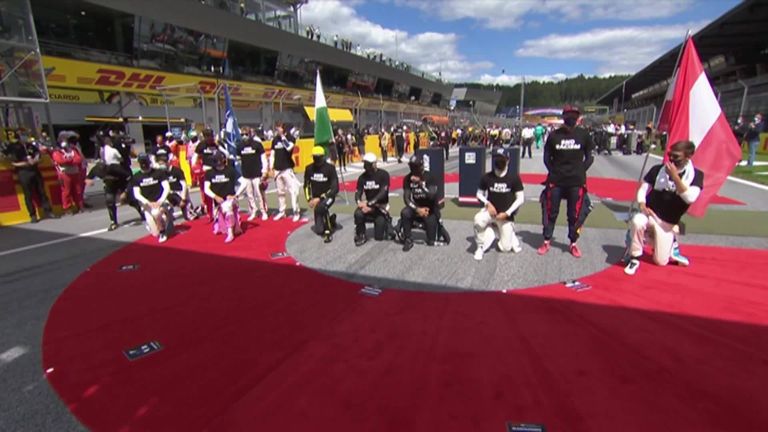 Speaking to Sky Sports F1, Hamilton said of Mercedes' gesture: "I didn't see it exactly. I was told just before the race that we're going to do it.

"It's not something I asked for them to do, but it's a beautiful thing. It doesn't take a lot to do something like that, and it's not changing the world, but perhaps shifting of perceptions and shifting ideals.

Hamilton's post-race anti-racism gesture echoed Tommie Smith and John Carlos when they took gold and bronze respectively in the 200m at the 1968 Olympic Games in Mexico.

The 35-year-old said the team's culture of wanting to learn and always move forward underpinned the six-time champion's unprecedented achievements in F1 after they opened up another season with back-to-back wins.

"We've had so much success over these years and the easiest thing is to lose focus, to ease up and lose determination I guess," remarked the Briton. "I don't see that ever happening in this team, it just doesn't seem to exist with us.

"The guys back at the factory are relentless. The guys here [at the track] continue to be passionate about what they do. We are so united and you saw today on the grid we all took the knee together and that's shown [that] with Mercedes we are learning along the way, and they're learning on the way, and being accepting of change.

"But also when we're talking about the car, they jump straight on it, they don't jump to conclusions, they do great research and this weekend we've not had any problems thankfully. Still there's a long way to go and it's a challenge for everyone with their cars but this was a step forwards for sure." 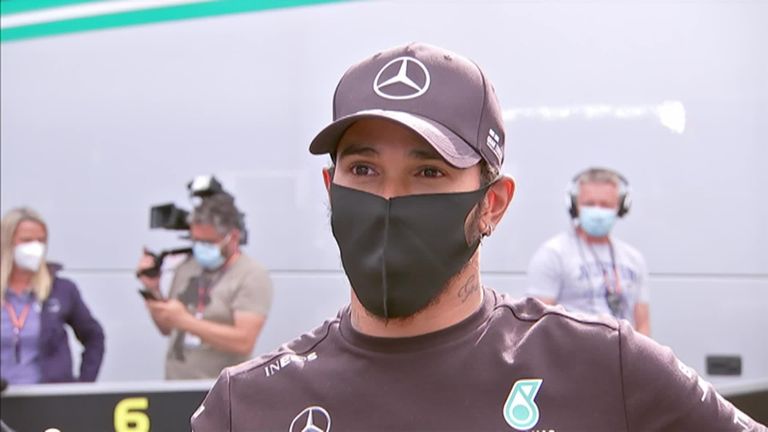 Hamilton 'over the moon' with victory

Hamilton dominated Sunday's race from start to finish for his 85th career win - just six away from Michael Schumacher's record - a week after finishing a penalised fourth at the same circuit after a disappointing weekend by the six-time champion's high standards.

He has long been renowned for hitting back straight away after setbacks and when asked how he manages it, Hamilton told Sky F1: "With great difficulty, but where there's a will there's a way.

"The last weekend definitely was psychologically challenging to have the penalties and then to be called into the stewards on Sunday morning just before the race. Then [to] get another penalty and then another one in the race.

"It's never easy, but there's nothing you can do about the past, all you can do is focus and channel your energy to the future. So, I just made sure I stayed here, trained well, ate well, slept well and worked hard with Bono [Peter Bonnington, Hamilton's race engineer] and the guys to understand where last weekend went wrong and corrected it this weekend."

Hamilton, who unusually had only won once in seven attempts at the Red Bull Ring, added: "I don't know why there are tracks that some drivers are stronger than others, but this is one of my weak circuits, so to get a performance like this today I'm over the moon. I'm so happy. But I do also know there's a long way to go."