Lewis Hamilton: Mercedes will 'unite and come back and fight' after losing F1 title leads to Red Bull

"There's a long, long way to go and we definitely can't afford another weekend like this," says Lewis Hamilton after Mercedes' Monaco struggle; Seven-time champion backs world champions to work through W12 car issues and hit back

Lewis Hamilton says Mercedes will "unite and come back and fight" after a chastening Monaco GP which saw them overhauled by Red Bull in both championship races.

Knocked off the summit of the points standings for the first time since 2018, Mercedes struggled with their tyres on the unique street track in the cool weekend conditions and registered a seventh-place finish with Hamilton and a race retirement for Valtteri Bottas after a pit-stop malfunction.

But, while inevitably disappointed with the result, there was no sense of panic from Hamilton for a team on a run of seven successive championship doubles. The seven-time world champion said they would hold "open and honest" talks in the coming days during their debriefs to get to the bottom of the issues and come back stronger.

"There is a lot that we could have done better in terms of how we prepared coming into the weekend," said Hamilton on Sunday evening.

"We've had some good conversations through the weekend, but it's not good enough from all of us. We win and we lose as a team and it's collectively not a good job from all of us. 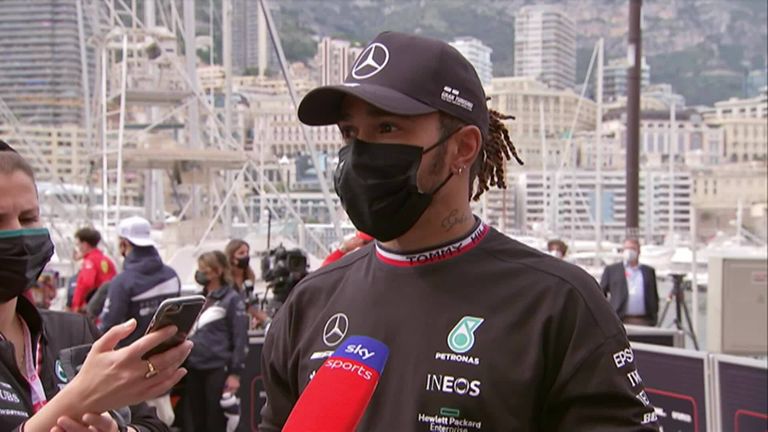 "We don't take it lightly but there's no point getting all depressed, we've got to start looking at the data and figuring out why we are in this position.

"We are going to be on calls over these next days once we get some analysis. Naturally we all want answers within the team.

"I know everyone will be working flat out to ensure that, hopefully, this sort of weekend doesn't happen again. We have shown time and time again in the past that we bounce back from these weekends, hence why I'm not the most stressed."

In a post on social media, Hamilton added: "Each and every person in this team is feeling it and we'll do what we have always done. Unite and come back and fight!"

Hamilton ready for the long game in 2021 title fight

Dropping four points behind Monaco victor Max Verstappen in the race for 2021's title after five races, Hamilton reiterated that Red Bull would be a difficult force to beat this year and that Mercedes "definitely can't afford another weekend like this".

But he took solace from the points he did collect in the Principality - which included the bonus point for fastest lap after a late 'free' stop for fresh tyres - and said the world champions would be back.

"I told you at the beginning they have got a championship-winning car, and they are going to be hard to beat," added Hamilton. "I've been serious about it all these races.

"We've won races which we shouldn't have done, like Bahrain, but it's not over. There's a long, long way to go and we definitely can't afford another weekend like this.

"But I'm grateful I finished and grateful that I finished and got some points. I got fastest lap, every little point that you can get on a bad weekend like this hopefully can count towards something at the end."

Mercedes will now hope for better at the Azerbaijan GP in Baku next week, a higher-speed street venue where they have triumphed on three of F1's four visits.