Qatar GP: Lewis Hamilton roaring back in F1 title fight as Mercedes say: 'They woke up the lion'

"I love the close battle, the pressure, the demands it puts on you and the whole team," says Lewis Hamilton as he cuts Max Verstappen's title lead - again - to eight points; Mercedes boss Toto Wolff says "they woke up the lion" at controversial Sao Paulo GP

Hamilton is now just eight points behind Verstappen heading into the season's crucial final two races after dominating on Sunday, securing back-to-back victories for the first time since early May.

It has been a significant turnaround in a little over a week for Hamilton, who was on the back foot back in Brazil after a qualifying disqualification. But amidst that setback, and the on- and off-track drama between Mercedes and Red Bull, Hamilton has outscored Verstappen by 13 points in seven days.

"Lewis is totally in the zone," Mercedes boss Toto Wolff told Sky F1. "They woke up the lion in Interlagos on that Saturday and you see that." 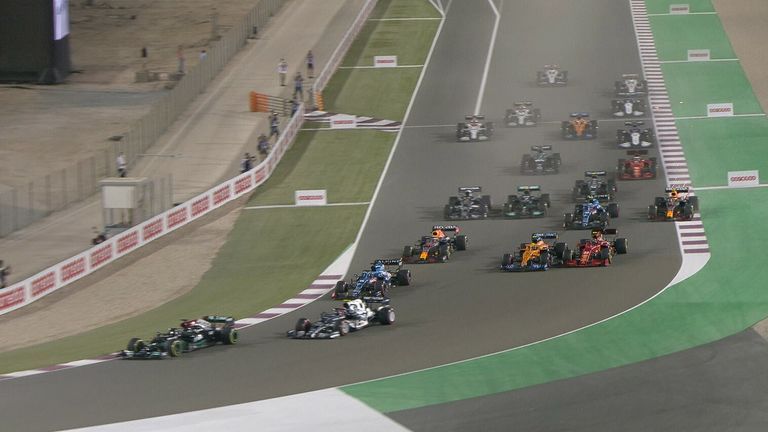 Hamilton followed up his Saturday qualifying disqualification in Brazil with a comeback from 20th to fifth in the Sprint race, before recovering from 10th to win Sunday's Grand Prix. In Qatar, it was a perfect weekend with his biggest pole of the season preceding one of his most comfortable wins.

"The last two weeks have been fantastic, just amazing," admitted Hamilton. "But there's no time for celebration, I'll be back with the team already again next week and training tomorrow, stay on it, heads down.

"I don't have too much emotion other than being driven right now, but it's just amazing to be able to close so many points in the last two races which has been important. [Red Bull are] obviously still very fast as you could see today with their fastest lap and both their cars getting past pretty much everyone quite easily. So we've still got our work cut out."

Asked about the title battle and his bid for an historic eight crown, Hamilton added: "I'm loving it. I love the close battle, the pressure, the demands it puts on you and the whole team.

"So I thoroughly enjoyed it but these next two races need even better performance, so we'll be bringing our 'triple A' game for those ones."

The season finishes with back-to-back races in Saudi Arabia and Abu Dhabi.

How the title could be settled at Saudi Arabian GP

Hamilton may have cut Verstappen's advantage out in front but because the Dutchman's lead remains, for the first time this season the championship can be won at the next race.

Verstappen needs to finish the maiden Saudi Arabian GP with a 26-point advantage over Hamilton to clinch his maiden crown. That therefore means Verstappen will have to outscore Hamilton by 18 points.

Hamilton can stop Verstappen claiming an early championship by finishing fifth or higher.

Verstappen only needs to lead Hamilton by 26 points after Saudi Arabia and not 27 because in this scenario Verstappen would hold the 'tie break' in the title battle and would finish the season with more wins (he currently has nine to Hamilton's seven). So if Hamilton doesn't win in Saudi Arabia and they are level on points after the last race in Abu Dhabi, Max would be champion.