A bill to make Lewis Hamilton an honorary citizen proposed in Brazil; seven-time world champion jokes at Sao Paulo event that he is waiting for his passport; Hamilton also says he wants to spend more time in the country

Lewis Hamilton says he is "honoured" to have received the offer of honorary citizenship in Brazil and claims footballer Neymar "invites me every year" to spend more time in the country.

Hamilton has long had an affinity with the country, whose legendary Formula 1 driver Ayrton Senna is his idol, and he claimed his first world championship there in extraordinary circumstances in 2008.

A bill to make Hamilton an honorary citizen was proposed by congressman Andre Figueiredo after Hamilton won last year's Brazilian GP, where he unfurled the Brazilian flag as fans chanted his and Senna's names. 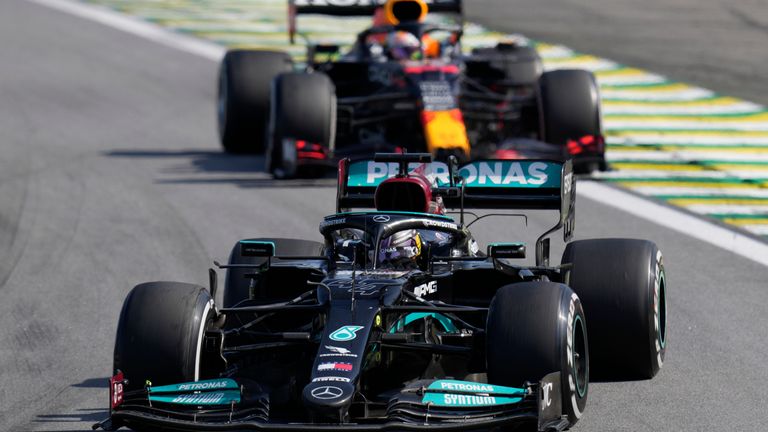 The bill has yet to be voted on in Brazil's parliament but presidential hopeful Ciro Gomes has backed Hamilton's citizenship, posting on social media: "Hamilton, you already live in our hearts.

"With the honorary citizenship, you will be even closer to us."

Responding to Gomes, Hamilton said: "I'd be honoured."

Hamilton: Neymar invites me every year

Hamilton's comments conveniently came just as he was arriving in Brazil to deliver a keynotes speech at an event, with the Mercedes driver having travelled to both Kuala Lumpur and Sao Paulo since last weekend's Australian GP.

At the VTEX day event, Hamilton again posed with a Brazilian flag and spoke more about his love for the country - revealing invitations from sporting megastars

"I want to spend more time here in Brazil," said Hamilton. "It is such a beautiful culture. I've only been to Rio and Sao Paulo, but I want to come back for Christmas, New Year or something.

Hamilton then joked: "I'm waiting for my Brazilian passport."

Neymar, the PSG and Brazil forward, and Hamilton have been friends for many years, while the 37-year-old is also a budding surfer and has spent time with Medina, a three-time world champion.

From a young age, Hamilton only had one idol he aspired to be like. Not Nigel Mansell, not Damon Hill, but Ayrton Senna - the influential and rapid Brazilian driver who won three F1 titles in the late 1980s and '90s.

His tragic passing after a crash at Imola robbed the sport of one of its finest ever drivers and Brazil of a national hero, and a devastated Hamilton - who was nine at the time - only grew fonder of his idol.

Throughout his junior and most of his F1 career, Hamilton wore a yellow helmet in tribute to Senna while it was the Brazilian's records that the Englishman always had his sights on.

Upon matching Senna's pole tally of 65 in 2017, an emotional Hamilton was given one of Senna's race helmets by his family.

Senna has been Hamilton's biggest inspiration during his rise to becoming F1's most successful driver, while he also has many fond Brazilian GP memories.

While Hamilton did not claim his first victory at Sao Paulo's Interlagos circuit until 2016, he won his first title there in 2008, and infamously on the last lap and at the last corner after overtaking a slowing Timo Glock.

His other victories at the circuit came in 2018 and in 2021, when he magnificently charged through the field in both the Sprint and the race, claiming a win that closed Max Verstappen's title lead.

Afterwards, he held the Brazilian flag from his cockpit and was draped in it on the podium.