Delving into the drivers' performances after those dramatic final laps in Russian GP; Lando Norris was superb until the last few laps, Lewis Hamilton took his 100th win but it wasn't a perfect weekend, while Max Verstappen rose through the field.

It was by no means the perfect weekend - his two crashes at the end of qualifying cost him what looked a sure-thing pole position while he dropped from fourth to seventh on the opening lap - but Hamilton delivered when it mattered.

Chasing down Norris superbly before, aided by Mercedes' pit decision, capitalising when it rained, Hamilton took his 100th race win and the championship lead at Sochi.

As Hamilton said, "that's mega damage limitation" for Max Verstappen. Hamilton may have claimed the race and the title lead, but Verstappen was arguably the big winner from the Russian GP and those crazy closing laps.

He was seventh before the rain fell, as his superb recovery from the back of the grid (which included some epic overtakes) faded somewhat, but pitted for intermediates earlier than most of his rivals and now only has a two-point gap to Hamilton in the championship. With more favourable tracks ahead, Verstappen and Red Bull would certainly have taken that.

A great weekend and a third podium of his debut Ferrari season for Carlos Sainz. Sainz secured a front-row start in qualifying - and he felt he could have got pole with better Ferrari timing - and then held the race lead at the start after overtaking Lando Norris.

He was re-passed by Norris later but crucially in the wet, while he pitted a lap after Verstappen and lost second, he pitted a lap before the other podium contenders and that secured third place.

Daniel Ricciardo followed up his Italian GP win with another strong weekend for McLaren, one where he didn't show the raw speed of Norris but was still able to hold off Hamilton for much of the race before a slow pit-stop dropped him back.

He deserved at least fourth, and given Norris' woe that was key for McLaren in their championship fight with Ferrari.

What started off a brilliant weekend for Valtteri Bottas - topping both practice sessions - turned into a very disappointing one after an unlucky qualifying and another engine penalty, and he was only running a meagre 14th heading into the final 10 laps. Toto Wolff sounded less than impressed on team radio.

But then came the rain, and Bottas, with nothing to lose, was one of the first drivers to fit the intermediates. Fifth place, thank you very much.

Showing superb speed towards the end of the dry running, Fernando Alonso felt he was on for a podium after overtaking Max Verstappen. The rain very much dampened his spirits, but at least he was able to salvage sixth place.

Displaying immense speed, composure and such maturity at a young age, Lando Norris got absolutely everything right in Sochi... until those agonising closing laps.

McLaren should probably take more of the blame for not bringing Norris in - it was obviously a mistake from the young Brit, but chasing his first win he was never really going to willingly stop and relinquish his lead. Both team and driver, however, are sure to learn from the experience and bounce back stronger.

Norris, in particular, should take the positives; this win would definitely have been on merit.

A very solid return to the track after missing two races with Covid for Kimi Raikkonen, who was in contention for points even before the rain but then made the wise decision to box for wet tyres early.

After another disappointing qualifying, Sergio Perez drove a very impressive race - running just behind Hamilton for much of it - and would likely have claimed a podium if it had stayed dry.

But the rain fell, Perez chose to stay out, and paid the penalty. Only P9 for the Mexican, who has scored just 16 points from the last six races. That is not what Red Bull need in their fight for the title.

After going 47 races without a single point for Williams, George Russell has now secured top-10 finishs in four of his last five races. Sure, he may have wanted more on Sunday - particularly given his superb grid position and after holding onto third before pitting on Lap 12 - but Williams had a big speed disadvantage to even the midfield cars, and Russell did well just to hang on for 10th in the wet in the end.

Out of the points

The epitome of a rollercoaster afternoon for Lance Stroll. He ran superbly in the dry, rising to fourth on the first lap and was on course to score strong points before the rain fell.

But then came those bonkers final laps, and Stroll crashed not once, but twice - making contact with team-mate Sebastian Vettel before clumsily punting Pierre Gasly off the track. That latter incident, as Stroll slid all over the track on the dry tyres, earned him a 10-second penalty. 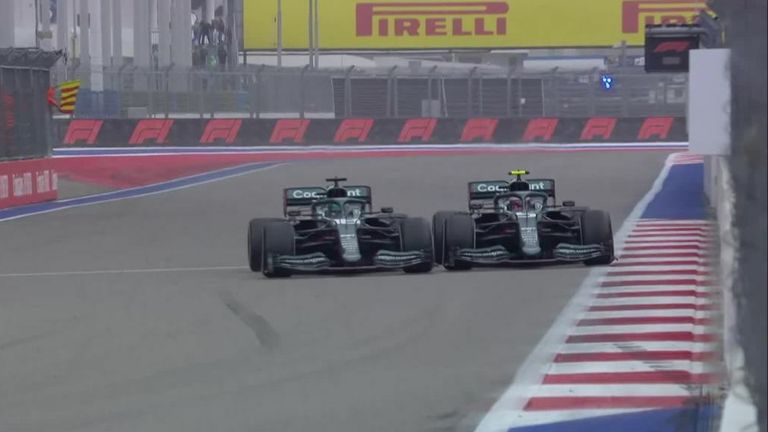 We heard the angry radio messages from Sebastian Vettel over the weekend - frustrated after just missing out on Q3, and then again at the end of the race as Aston Martin "gambled on the wrong option" by opting not to initially pit in the rain. That ultimately cost both drivers top-10 finishes.

Speaking of frustrated drivers, look no further than Pierre Gasly. The Frenchman said the team "missed two big opportunities" in Sochi, first in qualifying when he was kept out on used tyres and missed out on what looked a definite Q3, and then in the race as he was kept out on the slicks. "A weekend to forget", added Gasly.

Esteban Ocon just didn't get going at the Russian GP. Slower than team-mate Alonso throughout the weekend, he wasn't in contention for points before the rain, nor was he afterwards. Not great.

Oh, Charles. All the great work that brought him from the back of the grid - aided by an absolutely epic first lap that brought him up to 12th from 19th - into the top-eight was undone by choosing to stay out longer than anyone - minus Norris - in the wet.

Sunday's race was always going to be difficult for Antonio Giovinazzi after being hit at the first corner - and it was made even harder by the fact his radio didn't work and so didn't have any communication through the whole race. "I couldn't talk to the pits about the tyre change at the end of the race," said Giovinazzi. Not ideal!

He may have a new contract for 2022, but this is really a desperate run of form for rookie Yuki Tsunoda. In Sochi, he said he "struggled with the balance of the car all weekend", and he finished on track only ahead of a Haas.

Well off the pace in qualifying, Nikita Mazepin made a surge on the first lap to rise to 13th... but that was as good as his home race got. He finished plum last, and with a black and white warning flag for more aggressive defensive driving.

Nicholas Latifi is showing signs of improvement in the Williams but had a compromised weekend due to his engine penalty, and then spun off on the slicks in the wet and had to retire.

Mick Schumacher can be pretty pleased with his Russian GP despite not finishing it; he was close to Q2 in the wet qualifying and then showed decent pace in the race before retiring with a hydraulic issue.