"He does really push the limits, and sometimes he pushes it too much"; Sky F1 pundits discuss the Saudi Arabian GP and Max Verstappen, who has questioned the consistency of penalties after his and Lewis Hamilton's controversial clashes on Sunday 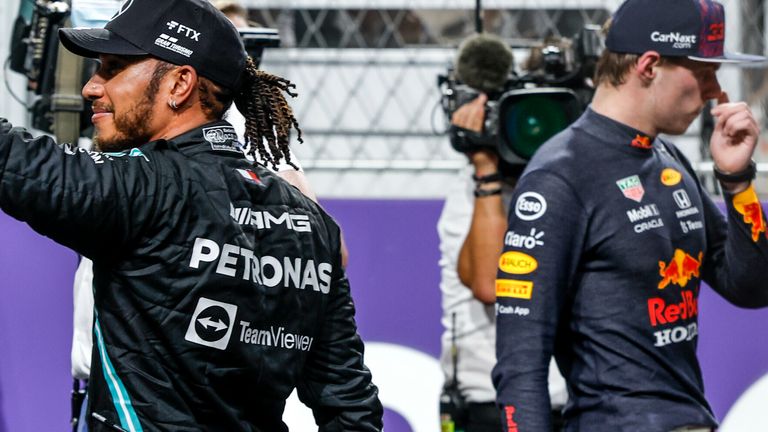 Max Verstappen "has got to think about his driving standards", according to Martin Brundle as the Sky Sports F1 pundits, along with Lewis Hamilton and Mercedes, questioned whether the Dutchman's aggressive approach was "too much" in Sunday's ill-tempered Saudi Arabian GP.

Verstappen, however, has countered that he just wants "proper racing" and that Formula 1 is now "more about penalties".

The penultimate battle of Verstappen and Hamilton's frenetic title duel was arguably the most contentious yet, with the rivals having clashed throughout the race before Hamilton hit the back of the slow-moving Red Bull car as he tried to move aside, as instructed following a previous offence. 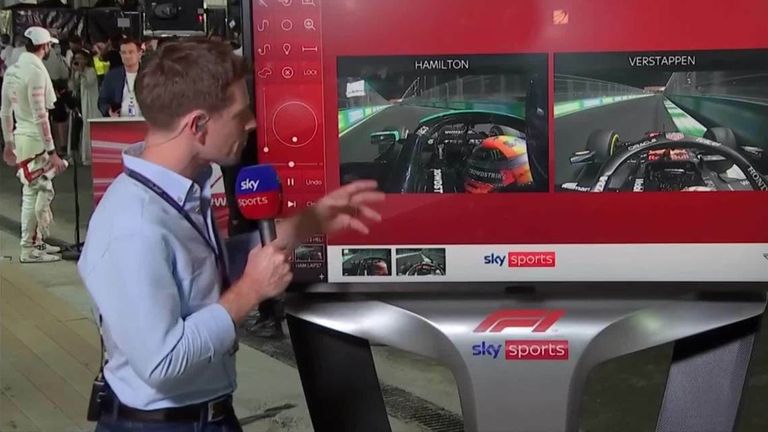 Verstappen ended up with two time penalties for the lap-37 incidents, 10 seconds for causing a collision with "erratic" braking and five seconds for the Turn 1 clash earlier in the lap when trying to defend his lead.

Verstappen kept his second place despite the punishments but his uncompromising style has drawn criticism, not only from Hamilton and Mercedes - who said he was "over the limit" - but also the Sky F1 pundits.

"I think Verstappen has got to think about his driving standards. They were too much today," said Sky F1's Brundle on commentary.

He added: "There's aggressive, determined, feisty racing and then there's what we saw this evening, which was too much." 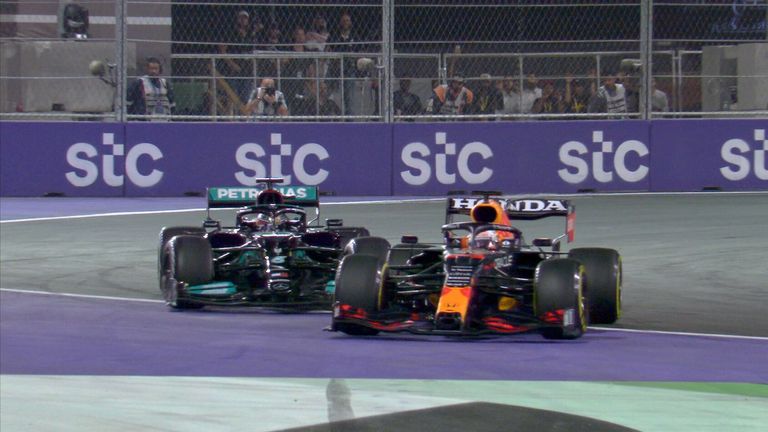 Verstappen and Hamilton went wheel to wheel many times on Sunday, although two of the Dutchman's defences involved him going off the track and almost colliding with the Mercedes.

"It puts a little bit of a bad taste in the mouth," stated Johnny Herbert on Sky Sports News. "I think it just shows what Max is willing to do to try and win this world championship.

"I agree with Lewis - I love Max for what he does on the racetrack - but he does really push the limits, and sometimes he pushes it too much."

The title contenders have clashed many times this season, with Hamilton increasingly angry about Verstappen's style. On Sunday, that reached boiling point.

1996 world champion Damon Hill added: "There are some people who drive with absolutely no compromise whatsoever, and I think Max is one of those people. But he's very skilful and very brilliant, and it's exciting to watch.

"I think Lewis, who has to deal with that, is now very cautious. He's not intimidated but he's very wary of Max, and probably rightly so.

"He's had to put up with a lot of vigorous defending with Max. It's not Lewis' style but it's Max's style and Max is pushing everything to the limit. It's for the world title, both drivers want it massively and there's always going to be tears."

Ever since breaking into F1 as the sport's youngest driver in 2015, Verstappen has driven with a similar style - one that has seen him emerge as one of the fastest and most exciting stars, but has also got him into trouble.

The 24-year-old has insisted throughout his career, and especially this year, that he drives hard but fair, and fumed after Sunday's Jeddah debut: "I'm just trying to race and this sport lately is more about penalties than racing.

Speaking specifically about the Turn 1 clash, which saw Hamilton attempt a move around the outside of Verstappen before both drivers broke late and end up off the track, the Dutchman was critical that it was only he who was penalised.

"I find it interesting that I am the one who gets the penalty when both of us ran outside of the white lines," said Verstappen.

"In Brazil it was fine and now suddenly I get a penalty for it. Well, you could clearly see both didn't make the corner, but it's fine.

"I think lately we're talking more about white lines and penalties than actually proper Formula 1 racing and that's, I think, a little bit of a shame."