Qatar GP: When to watch practice, qualifying and the debut race live on Sky Sports F1 this weekend

Will Max Verstappen or Lewis Hamilton be leading the incredibly close title battle after the first-ever Qatar GP? Watch the race at 2pm on Sunday - live only on Sky Sports F1

Formula 1's dramatic championship battle between Max Verstappen and Lewis Hamilton is down to its final three races, starting with the Qatar GP - and you can watch all the action live on Sky Sports F1 this weekend.

Verstappen and Hamilton, following a controversial Sao Paulo GP, are split by just 14 points in the standings, meaning the title cannot be clinched this weekend - but they can go a long way to having their hands on the trophy.

The Qatar GP sees a return to F1's usual format, with three practice sessions before Saturday qualifying, and the more familiar 'European' times for the first F1 weekend at the Losail International Circuit just outside Doha.

The key live times on Sky Sports F1 this weekend are: 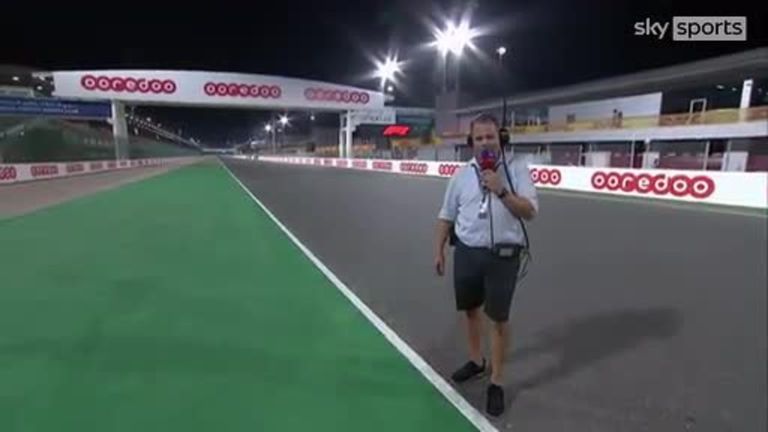 Although a first-time visit for Formula 1, Qatar has staged international racing events at the Losail since it opened in 2004. Qatar has been a mainstay on the MotoGP bike racing calendar since that inaugural year.

F1 has been a rumoured target for at least the last 10 years and Qatar is technically filling in this year for the Australian GP which was moving to a November slot due to Covid-19 before then being cancelled altogether several months ago for the second year running.

A 10-year deal from 2023 was penned at the same time (there will be no event in 2022 due to the World Cup) although the return is likely to be at a different venue to Losail.

Sergio Perez and Nikita Mazepin are the only drivers on the current grid to have raced the track. Perez won there in the GP2 Asia winter series in 2009. Former Force India team-mate Nico Hulkenberg won that weekend's other race.

"It is a really fast track, with a lot of downforce required so we will see how quick we can be," said Perez. "I don't remember driving there very well, it was a long time ago so I don't believe there is much advantage for me!"Sergio Perez is the only one of the grid's current drivers to have raced the track, the now-Red Bull driver winning there in the GP2 Asia winter series in 2009. Former Force India team-mate Nico Hulkenberg won that weekend's other race.

The race takes place at 5pm local time, 2pm in the UK, classifying it as a 'twilight' race like Abu Dhabi which starts as the sun is setting and finishes under floodlights.