Conor Cusack: "The GAA is the heartbeat of Ireland... Making this statement is a very powerful thing to do"

The Gaelic Athletic Association will this weekend create history, taking part in the Dublin Pride Festival for the first time.

In the latest move to acknowledge and embrace the diversity within the association, it's a meaningful act which is resonating with the LGBT community within the GAA.

"They're giving a strong, vocal statement to everybody in the GAA that this is something that the association is very much committed to." 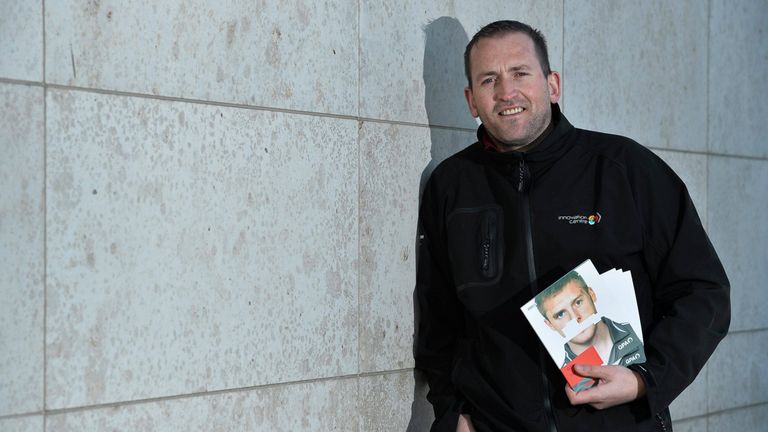 "This isn't just the GAA giving a token gesture."

Cusack feels it can help individuals who are struggling

Cusack has been central to the drive which led the GAA to this point. Along with a group which featured Gaelic football referee David Gough and ladies footballers Nicole Owens and Valerie Mulcahy, they worked with the powers that be in Croke Park to make the LGBT community feel more at home within the GAA.

The appointment of a full-time diversity officer is another step by the association to shed light on the issue.

"The GAA has recognised that it has a responsibility to all its members," continued Cusack. "The reality is too, the GAA are dealing with phone calls every week with parents whose children are LGBT and having difficulties within the sport.

"It's a significant enough move from John Horan and the GAA in terms of committing to this. The GAA is the heartbeat of Ireland - its pulse reverberates in every town and city in the country. It's in every part of the country. The GAA making this statement is a very powerful thing to do."

The GAA appreciate the impact such an initiative can have on the ground.

"Last February I used my address to GAA Congress to highlight the need for us to show solidarity and respect for members of the LGBTQ+ community who make a contribution to our association," said GAA president John Horan upon last month's announcement.

"The opportunity to take part in the Dublin Pride Festival and parade is a follow on from that and I am delighted that we will do so.

"We recently launched a manifesto hailing the GAA as 'Where We All Belong'. This is one way of living up to that assertion, of actions speaking louder than words.

"The challenge for our association at all times is to be relevant and to try our best to positively reflect society.

"The GAA has a huge presence in Irish life and I am delighted that the association is committed to making such a positive difference by ensuring that inclusion is prominent in how we operate."

At present, there is no current senior intercounty men's player in hurling or Gaelic football who is openly gay. Nobody has followed in the footsteps of Donal Óg Cusack, who retired in 2013.

Cusack was keen to stress that while on a micro level, it is any one person's own business whether or not they come out, it could be deduced from the macro level that many don't see it as a comfortable environment to be themselves.

"But also I know the power of visibility. How important it is for people of all generations to be honest, important for those young players growing up to have someone they can identify with. When I was growing up, the only people I could identify with was people on TV who were these very 'camp' characters.

"There's nothing wrong with being camp. But for me, a person playing sport, I didn't have anyone like that who I could identify with. I just know how important it is for young people for having some people they can identify with. Donal Óg is of a different generation now. You see now in the female game now, there's a lot of top-level players within the camogie and ladies football, that are publicly out about their sexuality.

"It's definitely noticeable. It's reflective of the journey that we still have to travel. We don't have another men's player who has found himself in a position to add his voice and name to that list, that gives visibility that is so very important for young people."

He went on to state that for anyone considering coming out, that it would be well-received.

"I genuinely believe the GAA is a very welcoming place for LGBT people," Cusack continued. "I talk from my own experiences, from Donal Óg's, from David Gough's. Ultimately, we're the only three people who are publicly open about our sexuality when it comes to the GAA in the men's game.

"I would hate to have thought I would have missed out on the richness that's associated with being a member of the GAA, and belonging to the GAA family, there's hugely positive benefits for the individual - being involved in the community and club. A person can bring their whole self to the sport

"That richness has brought heartbreak, losing county finals and All-Ireland finals, and falling outs and arguments. But also the joys - there's an inherent human need to belong to something bigger than yourself and something outside of yourself.

"I would hate to have missed out on that because of my mental health or my sexuality.

"There's too many people, for whatever individual reason, are missing out on the richness of being a member of the GAA."

The GAA, which is in many ways reflective of Irish society as a whole, has come a long way. Nonetheless, there are currently no active players in the men's game that are out, but this weekend provides another landmark to show the association is moving in a positive direction.