Watch the second round live on Sky Sports Golf. Coverage begins on Saturday at 5pm.

Jon Rahm is determined to "steal" another big tournament away from Dustin Johnson after pulling level with the FedExCup leader on day one of the Tour Championship.

Rahm is still revelling in his thrilling play-off victory over Johnson at last week's BMW Championship, where he holed an astonishing 66-foot putt for the winning birdie on the first extra hole, and his confidence was evident in an opening 65 at East Lake, which was two strokes better than his rival.

The Spaniard's six-birdie round hauled him level with Johnson in the race for the $15m prize as FedExCup champion having started the PGA Tour's season finale two shots behind, while Justin Thomas (66) and Rory McIlroy (64) both made ominous starts.

The world's top two players were both pleased with how well they scored considering their driving accuracy was lower than desired, while Rahm again holed a series of big putts on the back nine as he carded four birdies in five holes to move level with Johnson on 13 under par.

"It's just weird to see us both struggle off the tee," said Rahm. "That's usually our forte, our strong suit, and usually we are both bombing down the fairway and hitting good shots.

"So it's weird to see the opposite from both of us and kind of pull some good short games and good par putts out there. Technically, it is a continuation, right? I kind of stole that tournament last week from him and he started with a two-shot lead, so hopefully I can steal this one, as well.

"I would say rounds like this don't come by very easily at East Lake. I'm assuming my fairways hit percentage wasn't very high, so to not hit many fairways and still shoot low, it's a hard task out here. 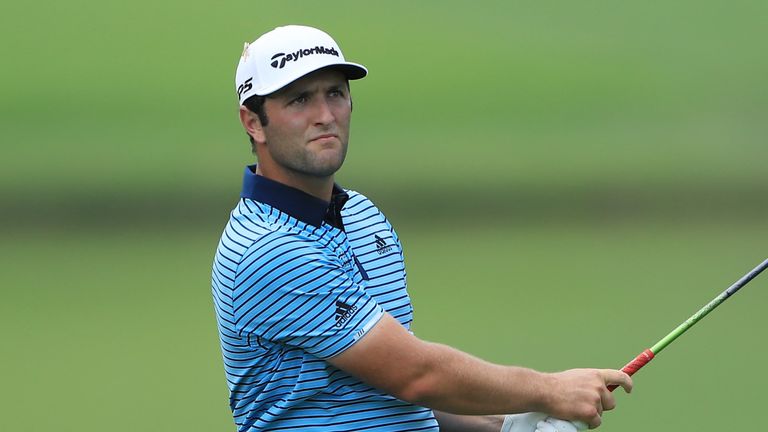 "There was a couple really good ones, like the up-and-down on 6 and the up-and-down on 10 were extremely good, but my driving wasn't great, my iron play was good, and my putting was phenomenal today. So hopefully I can keep rolling it consistently good and tidy up those tee shots.

"I was definitely trying to put the heat on DJ. Justin put the heat on both of us early on, and that only helps for all of us to try to play our best golf. And at the end of the day we're entertainers, as well, so we're here to put our best performances and the best show possible."

Johnson made five birdies but wayward drives led back-to-back bogeys at the eighth and ninth, and he is also aware of the importance of finding the short grass from the tee if he is to hold off Rahm and capture his first FedExCup title.

"I gave myself a few looks, but I need to hit some more fairways," said the world No 1. "That's just the key out here is driving, if you can drive it in the fairway, you can shoot a good score. The greens are so good, and the only way to control the golf ball coming into the greens is hitting out of the fairway.

"That's the only thing I need to do a little better tomorrow. It wasn't like I was way off or anything, I just hit quite a few drives just in the rough, which is no good around here."