Dustin Johnson blamed a poor performance on the greens for his early exit at The Masters after the defending champion missed the halfway cut by two shots at Augusta.

Johnson was left to rue six three-putts over the first two rounds which contributed to his downfall, and November's runaway winner will now have two days of inactivity before reappearing in the Butler Cabin on Sunday evening to present the new champion with a Green Jacket.

The 36-year-old could also lose his world No 1 ranking if that champion is Justin Thomas, who is just three shots behind halfway leader Justin Rose heading into the weekend.

Johnson opened with an erratic 74 on Thursday and needed to better that to avoid crashing out, but he did not give himself encouragement at the first when he tugged his three-wood into the pines and started with a bogey-five.

Birdies at the third and fourth were offset by a six at the fifth, where he blocked his drive and then three-putted from 60 feet, and another shot went at the next before he hit back with birdies at the eighth and ninth to return to two over at the turn.

He remained safely inside the cut mark with four to play, but he came up short with his second to the long 15th and found the water at the front, leading to a bogey-six, and poor drives on each of the closing two holes resulted in a bogey, bogey finish and a round of 75, leaving him at five over par for the tournament.

"Six three-putts in two rounds, you just can't do that," said Johnson afterwards. "Obviously I didn't drive it great but I drove it good enough, and I felt like I was never really too bad out of position.

Johnson warned pre-tournament that his game was not as sharp as it was when he romped to a five-shot victory and his second major just five months ago, but he denied feeling extra pressure as defending champion.

"It's still kind of the same," added Johnson, who confirmed he will play in next week's RBC Heritage. "Obviously I wanted to be around for the weekend. I like this golf course, I feel like I play it very well. I just didn't putt very good. It's pretty simple."

Brooks Koepka mirrored Johnson's scores of 74 and 75 just three weeks after undergoing knee surgery, and he admitted he would not have played for "another month" had it not been the first major of the year. 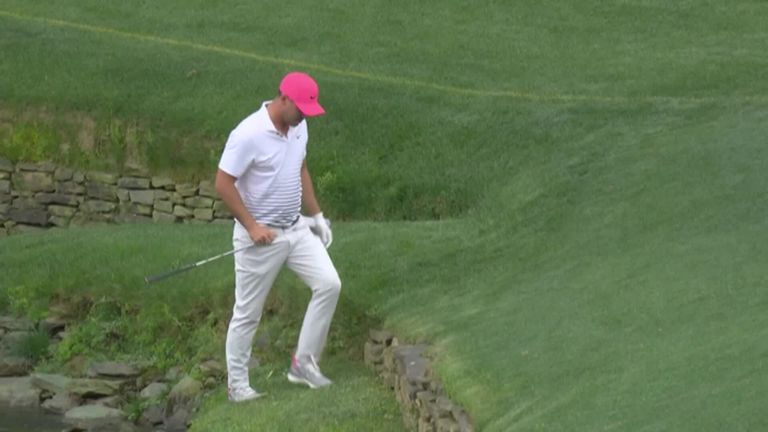 Koepka was clearly in discomfort throughout the two days, and even crawled onto the 13th green after stabbing his third shot out from close to the water, and he will now focus on getting fit for a crack at a third PGA title at Kiawah Island next month.

"I wouldn't have been playing for another month if the Masters wasn't this week," he said. "So I'll take a nice long break after this. The way I look at it, I have two more days to do rehab that I probably wouldn't get if I was out here, and I'll get ready for the PGA.

"That's, what, five weeks ahead, I think? It's kind of tough to say if I'll play anything before that just for how it feels, how rehab goes and everything."