Scottish Open: Rory McIlroy has club and driver headcover taken by spectator ahead of second round

Rory McIlroy was waiting to begin his second round at the abrdn Scottish Open when he saw an iron and his driver headcover taken by a spectator; Both items were returned to the four-time major champion before the spectator was removed from the course 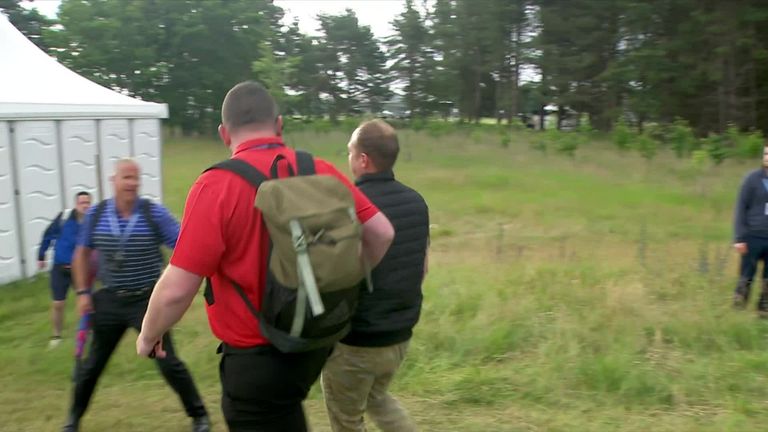 Rory McIlroy was part of a bizarre incident ahead of his second round at the abdrn Scottish Open, where a spectator came to the tee and took a club from his golf bag.

The four-time major champion was at the tee ahead of his 8am start time alongside Justin Thomas and world No 1 Jon Rahm at the Renaissance Club, when someone from the crowd walked onto the tee and towards McIlroy's bag.

The spectator confidently strolled onto the tee and pulled off the distinctive dog headcover from McIlroy's drive as he walked past the Northern Irishman, before taking another club out of the bag and walking away from the marquee group.

McIlroy and his caddie, Harry Diamond, along with Rahm, looked on in disbelief as the spectator placed the headcover on the ground and started a routine as if he was about to hit a shot, before quickly being stopped by the starter at the tee.

The spectator handed the club back to Diamond as he was escorted off the tee by security, with the man also begrudgingly returning the headcover after a couple of attempts to keep hold of it.

Speaking about the incident after his second-round 71, McIlroy said: "I was surprised. Everyone saw what happened on TV. It was handled efficiently and everything was OK. I had no idea who it was."

A spokesperson for the European Tour said: "At approximately 8am on Friday morning, a spectator entered the 10th tee area. He was quickly escorted from the tee by security personnel and the matter is now in the hands of Police Scotland."

A Police Scotland spokesperson said: "Officers were alerted to a man causing a disturbance within the grounds of the Renaissance Club in East Lothian, around 8am on Friday, July 9. The 35-year-old man has been taken to the Royal Infirmary of Edinburgh and enquiries are ongoing."

It is the first time that fans have been allowed in to watch a European Tour event in the UK this year, with around 4,000 permitted per day. There will be 32,000 spectators a day at The Open next week at Royal St George's.

The abrdn Scottish Open is live throughout the week live on Sky Sports Golf.