Henley shot a three-under 67 Saturday to take a two-stroke lead into the final round of the Sony Open in Hawaii; Matsuyama two back as he chases a first PGA Tour title since his major success - watch the final round live on Sunday from 9pm on Sky Sports Golf 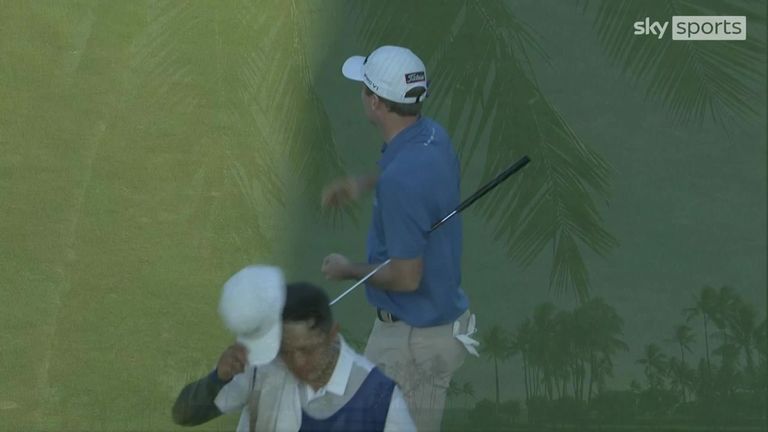 Hideki Matsuyama fired a round-of-the-day 63 to get within two of the lead heading into the final round of the Sony Open in Hawaii.

The Masters champion posted seven birdies in his third round at Waialae Country Club to move to 16 under and close the gap on Henley, who carded a three-under 67 to stay top of the leaderboard.

Matsuyama picked up shots at the second and seventh and followed a two-putt birdie at the ninth by taking advantage of the 12th and holing a 35-footer at the next, with the Japanese star holing from 15 feet at the 14th and also birdieing the par-five last.

"Probably putting was my strong point today," Matsuyama said. "Even my missed putts found the hole. I was lucky today."

Henley took a three-shot lead into the weekend and saw his lead trimmed by a shot despite mixing five birdies with three bogeys, with the American still top going into the final day as he chases a first PGA Tour success since 2017.

"I figured it wouldn't be quite as easy as the first two days. It's just not how golf works typically," Henley said. "I wasn't planning on making bogeys, but definitely wasn't expecting to shoot eight-under again. At the same time, I felt really good about my game all day."

Ireland's Seamus Power is four strokes off the pace in tied-third with Matt Kuchar, Haotong LI of China and Canada's Adam Svensson, while Lucas Glover and Kevin Kisner are five behind on 13 under.

Scotland's Russell Knox is tied-ninth, with defending champion and first-round leader Kevin Na in a share of 11th on 11 under after a third-round 67.

Who will win the Sony Open in Hawaii? Watch the final round live on Sky Sports. Featured Group coverage begins on Sunday from 9pm on Sky Sports Golf, ahead of full coverage from 11pm.