Padraig Harrington's wealth of Ryder Cup experience both on and off the course make him the ideal choice as European captain for 2020, says Rob Lee...

Was there anyone else in the frame? After the last Ryder Cup in Paris, two very prominent members of the European team - Justin Rose and Rory McIlroy - gave their public backing to Padraig Harrington.

With endorsements like that, Padraig became the front-runner very quickly, and he became the overwhelming favourite when Lee Westwood pulled out of the running.

I think it's fair to describe the appointment of Harrington as a no-brainer. The likes of him, Westwood, Ian Poulter and Sergio Garcia are pretty much nailed on to take on the role at some point, and the timing is good to have the Irishman as Ryder Cup captain.

He has got great experience in the US, so he won't be intimidated. He's popular over there, so that's a big help, and he's also got vital knowledge of Whistling Straits. That course has hosted the PGA Championship three times since 2004, and Harrington played in all three of them. 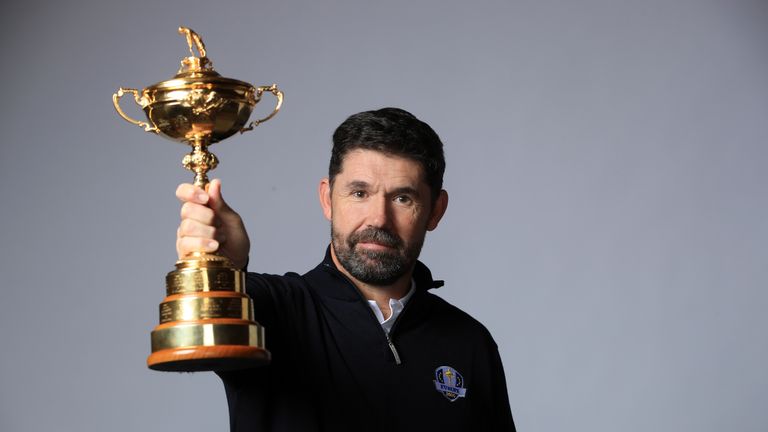 Having said that, I doubt if we'll see the course set up in the same way as it would be for a major. The PGA of America removed much of the rough at Medinah and Hazeltine to suit the American players, and I expect to see more of the same in Wisconsin. Team USA generally have the longer players, so they will be keen to open up the fairways and turn it into a putting competition.

It could be the polar opposite of the set-up we saw at Le Golf National, where the European team's superior course management was a key factor in their handsome win. The only American player to tee up in the French Open at the same venue last year - Justin Thomas - was unsurprisingly the top points scorer for Jim Furyk's side, and that was telling.

It's vital to serve an apprenticeship as a vice-captain so that, when you get your turn in the top job, you know every detail and you also know how important your backroom team is.

I've heard people comparing Harrington with Paul McGinley, but I don't think anyone will match McGinley for his unprecedented level of preparation ahead of the Ryder Cup in 2014. Paul is a fastidious, meticulous, incremental thinker and everything he does is super-organised.

He spent countless hours analysing all manner of statistics for his own team as well as the opposition, and he took Ryder Cup captaincy to a new level. He raised the bar, created the blueprint for future captains.

Harrington spoke of finding "that little edge" to give Europe the best possible chance of retaining the trophy in Wisconsin, and he'll leave no stone unturned over the next 18 months or so. It is really tough to win a Ryder Cup in America, but there is nobody more suited to taking on that challenge.

Padraig made six Ryder Cup appearances as a player, but being a vice-captain for the last three will be more important for him in his new role. When you're a player, you are solely concerned with your ability to perform on the biggest stage of all and trying to get your game in optimum shape.

The captain has so much more to think about, and the assistant captains play a big part in the decision-making process. You're looking after the players rather than being looked after, and you get an invaluable guide into what needs to be done to be a successful Ryder Cup skipper.

It's vital to serve an apprenticeship as a vice-captain so that, when you get your turn in the top job, you know every detail and you also know how important your backroom team is.

While Harrington was the obvious candidate to captain Europe in 2020, the Team USA captaincy is less clear-cut, although Wisconsin native Steve Sticker seems to be the popular choice. If Stricker does succeed Jim Furyk, we'll have two guys at the helm who have the good of the game of golf right at the top of their priorities.

Fred Couples is a contender, while I doubt if Tiger Woods or Phil Mickelson will be right for the job next year. I just think Stricker would be an ideal choice. He's a good guy, well respected, and he's already enjoyed success as a team captain in the Presidents Cup. There will certainly be more pressure being a Ryder Cup captain, particularly on home soil, and I'm expecting Stricker to find out the difference first hand.

The PGA of America might be tempted to go for someone with a winning pedigree as Ryder Cup captain, with Davis Love III and Paul Azinger top of a very short list! But I think that's a road you should not go down. If you go to a former winning skipper, that in itself is a statement of weakness in my book.

But, from a European perspective, I'm thoroughly looking forward to seeing how Harrington handles himself, and the great thing about him is that he will never hide.

Things are not always going to go your way during a Ryder Cup, and it's important to have a captain who is wise enough to avoid stamping his own authority on the week. He won't want to change a winning formula, he knows what works and - perhaps more importantly - what doesn't work, and he'll stick with that.

Padraig will make absolutely sure that the players know he has belief in all of them, and they are guaranteed to give their best for him out on the course.

His planning starts now and he will be consumed by all things Ryder Cup for the next 20 months. But he is well-equipped to handle it, and I have no doubt he'll be a great captain at Whistling Straits.