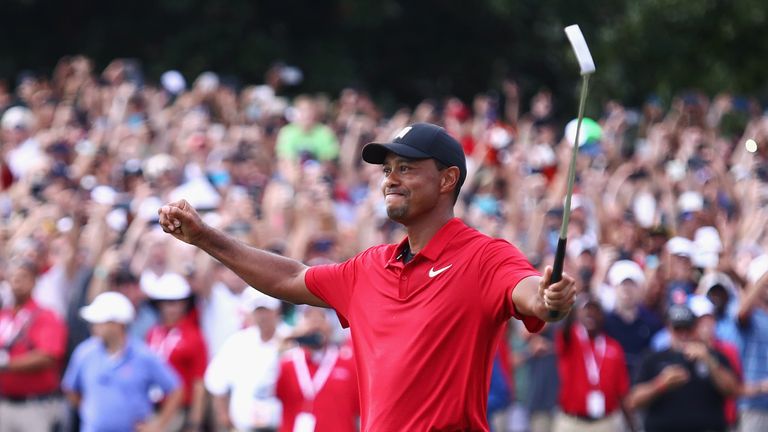 Tiger Woods claimed his first title in five years as he held firm down a nerve-shredding back nine to secure a two-shot victory at the season-ending Tour Championship in Atlanta.

The 14-time major winner hit a one-over 71 at East Lake to top the elite 30-player field as his closest overnight challengers Rory McIlroy and Justin Rose struggled to mount any resistance.

An 80th PGA Tour title for Woods sees the American cap a remarkable season, in which he has defied sceptics, in fitting fashion but Rose did enough, despite a late scare, to win the FedExCup and its $10m (£7.6m) jackpot with a share for fourth-place. 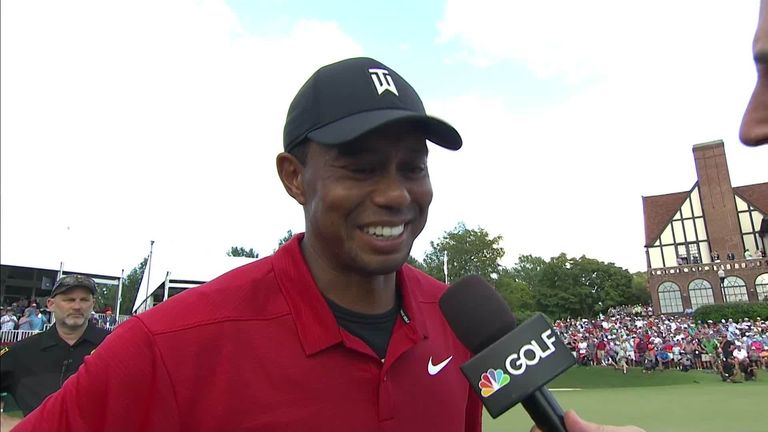 Former FedExCup champion Billy Horschel finished the week at nine-under, after setting the clubhouse target, in second spot, with Dustin Johnson, who returned to the summit of the world rankings, two shots further back in third as Rose joined Hideki Matsuyama and Webb Simpson at six under.

Woods held a three-shot lead over European Ryder Cup duo McIlroy, another former FedExCup champion, and Rose but while they struggled to maintain their showing over the opening three rounds, the 42-year-old delivered another assured round.

Tiger Woods was bidding to become the first three-time winner of the season-long race on the PGA Tour.

He wasted no time in extending his advantage as he converted a nine-foot birdie putt at the first, while playing partner McIlroy saw his remaining hopes disappear with a double bogey on the seventh after a wild drive into the trees.

Rose, like McIlroy, would have hoped for a fast start - just like the one Woods enjoyed on Saturday - but the Englishman hit the turn in 36 after mixing a birdie with two dropped shots.

Woods dropped his first shot of the day on the 10th, but responded with a birdie at the 13th and saw his hopes of coupling the win the FedExCup bonanza increase as Rose's commanding stranglehold slipped away with three bogeys in the space of five holes.

Horschel carded a front nine two-under 35 and recovered from a bogey at the 10th to make three gains, including a closing birdie to finish with a four-under 66 while Johnson also harboured hopes of winning the FedExCup before he was forced to settle for a par at the 18th and a three-under 67.

Woods was also stumbling in the energy-sapping conditions after dropped shots on the 15th and 16th, but a par save at 17th saw him take a two-shot lead down the last.

Rose knew finishing outright fifth or better would secure the biggest payday of his career but it was only until a closing birdie at the last that saw him celebrate his own success, albeit it wasn't enough to retain his world No 1 ranking.

Despite missing out on winning the FedExCup title, which would have been his had Rose not finished with birdie, it was still a joyous occasion for Woods, as he arrived to the final green to delirious support from the watching crowds.

As McIlroy finished his disappointing round with a tap-in birdie for a four-over 74 it was left to Woods to complete his winning moment and despite seeing a birdie putt slide by held aloft his arms in celebration after tapping in his par.

My congratulations to @TigerWoods on winning the @playofffinale! I am very happy for him and extremely proud of him. Tiger has worked very hard to get to this place, and has played very well all season. @PGATOUR

Everybody watching at home, everybody that was right there when it happened. We’ve just witnessed the greatest comeback of all time! What a time to be alive!!! 🐯 🐐

Massive congrats @JustinRose99 for winning the #FedExCup and of course @TigerWoods for winning #80 on @PGATOUR. So well deserved for both. Such a cool experience walking down the last hole with all that excitement! Onwards and upwards. https://t.co/pnH5Wa5lyx