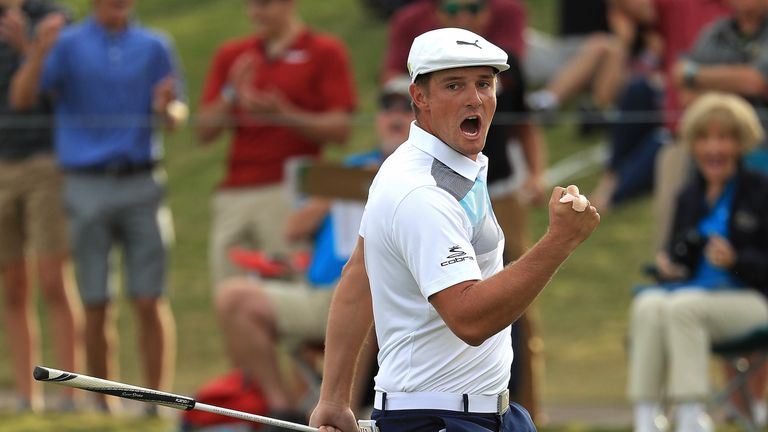 Bryson DeChambeau landed his fourth PGA Tour title of an outstanding year after a thrilling finish to the Shriners Hospitals for Children Open in Las Vegas.

DeChambeau's sensational long-range eagle at the 16th proved the decisive blow as defending champion Patrick Cantlay paid the price for a big error at the penultimate hole, just after three birdies in four holes had lifted him into the lead.

Cantlay hit back to birdie the last to cap a 65 and post 20 under par to put the pressure on DeChambeau, but the Ryder Cup star was up to the challenge and he safely negotiated the closing two holes in pars to clinch a one-stroke triumph.

Late charges from Sam Ryder (62) and Rickie Fowler (63) came up narrowly short, while former US Open champion Lucas Glover's hopes of a first win since 2011 were scuppered by an erratic back nine at TPC Summerlin.

DeChambeau shared the overnight lead and improved his position with two birdies over the first four holes, and he hit back from a bogey at the eighth with another birdie from just inside 20 feet at the ninth which got him back to 18 under.

Cantlay, meanwhile, recovered from a nervy start with a sparkling run of four consecutive birdies from the fifth, and he stayed in contention with further gains at 11 and 13 either side of his second blemish of the round at the 12th.

DeChambeau converted a neat wedge to three feet at the 10th, but he missed further opportunities just as Cantlay birdied 15 and then nailed a 15-foot putt on the 16th green which lifted him into the outright lead for the first time on the day.

But the tournament swung back in DeChambeau's favour in a matter of seconds as Cantlay blocked his tee shot into a greenside bunker at the short 17th and then chunked his splashout, his ball just getting out of the trap and into the fringe.

He then heard huge roars back at the 16th green when DeChambeau's slippery, downhill eagle putt from close to 60 feet dropped into the middle of the cup to complete a remarkable three-shot swing when Cantlay settled for a two-putt bogey.

To his credit, Cantlay knocked a pure approach to eight feet at the last and rolled in the putt for his eighth birdie of the round, but DeChambeau held his composure to sign off with a rock-solid par which capped his third 66 of the week, and his fourth win since lifting The Memorial title in June.

Cantlay had to settle for outright second ahead of Ryder, who stormed to the turn in 30 and added four more birdies on the back nine, including his ninth of the day at the final hole as his 62 briefly gave him the clubhouse lead on 19 under.

Fowler reeled off six birdies in eight holes after the turn as the fan-favourite roared into a tie for fifth with Abraham Ancer and Robert Streb, while Glover's tournament ended in miserable fashion as he found two hazards on the closing hole and ran up a triple-bogey seven which saw him slide to 15 under par.