Brooks Koepka gave himself a confidence boost just a week before he begins his defence of his PGA Championship title as he made an excellent start to the AT&T Byron Nelson.

Koepka's first competitive round at Trinity Forest in Dallas resulted in a classy six-under 65 which left him just two strokes adrift of Denny McCarthy, while local favourite Jordan Spieth was unable to build on a flying start as he opened with a frustrating 68.

With the early starters having the benefit of benign conditions on a course softened by heavy rain which forced the cancellation of Wednesday's pro-am, McCarthy emerged as the outright leader after making a superb recovery from an early double-bogey at the fourth.

McCarthy, who hit the headlines at the Phoenix Open in February when a two-shot penalty for an alleged breach of the new caddie alignment rule was rescinded the following day, carded five consecutive birdies from the sixth and then picked up five more in six holes on the back nine, which he covered in just 29 blows.

The 26-year-old nailed a good par putt from eight feet at the last to remain at eight under and ensure a one-shot overnight lead ahead of Tyler Duncan and Tom Hoge, while Koepka was among a large group of players in a share of fourth place.

Koepka made a quiet start on the back nine before getting under the card with a birdie at the long 14th before a pure strike to seven feet at the tough 17th set up the first of four birdies in a row, including a huge putt for a three from outside 40 feet on the 18th green.

The three-time major champion added another at the fifth before blotting his scorecard at the next, but he got the shot back at the long seventh and then made his third two of the round at the eighth, although a poor second to the ninth would cost him another bogey.

"I just want to feel good when I leave here on Sunday," he said in reference to his bid to retain the Wanamaker Trophy at Bethpage Black next week. "Driving it well and striking it really well, I like where that's at.

"The last few weeks I've been even impressed with myself and how well I'm striking it. I'm controlling it nicely and then from there just try to feel like you see some putts go in the hole. I think it's important to kind feel like the hole is opening up with a major."

Former Open champion Henrik Stenson birdied five of the first eight holes before the wind strengthened over the remainder of his round, and the Swede offset a bogey at 13 with a birdie at 14 before another blemish at the last saw him close on four under along with Hideki Matsuyama and Scotland's Martin Laird.

Spieth finished a further shot back despite following a birdie at the first with four in a row from the fourth, but he made a mess of the ninth and needed three shots to find the green before he three-putted from long distance for an ugly double-bogey six. 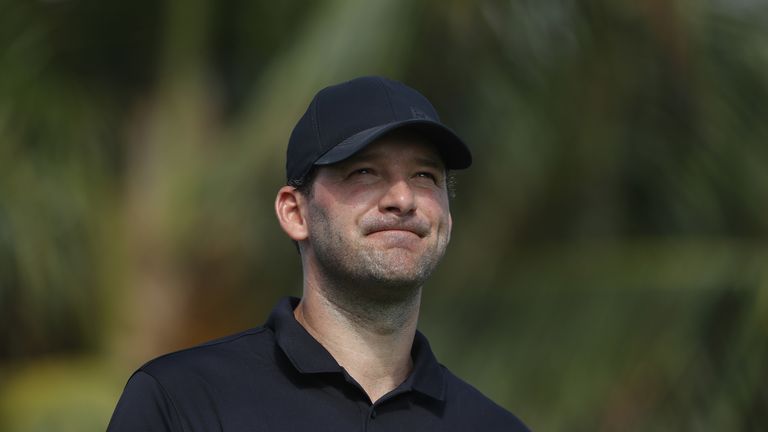 The 25-year-old, still without a victory since winning his third major at The Open in 2017, was another to struggle in the breezy late-afternoon conditions and mixed two more birdies with a pair of bogeys on the back nine as he slipped five shots adrift of the leader.

There was, predictably, a large following for former Dallas Cowboys quarterback Tony Romo, a Trinity Forest member making his third PGA Tour start on a sponsors invite, and he prompted the biggest cheer of the day when he pitched in for eagle at the seventh to get to two under.

But a big pull off the ninth tee led to a double-bogey, and he then dropped four shots in three holes from the 13th before a further blemish at the 17th saw him slip to five over par, with only two players below him on the leaderboard.