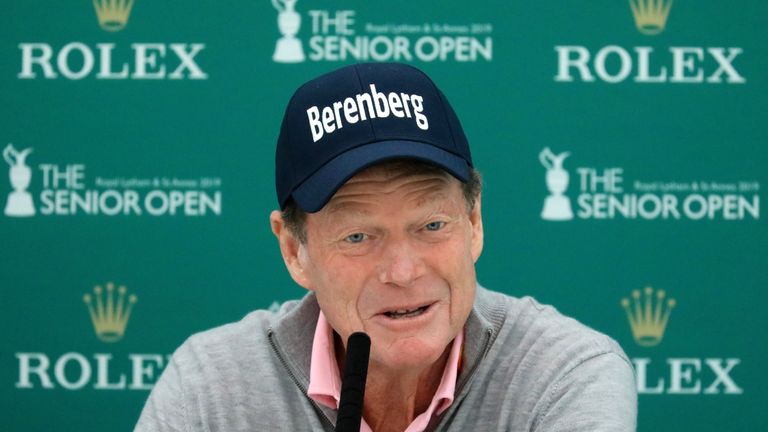 Tom Watson will bid an emotional farewell to competitive major golf on Sunday after announcing that the final round of The Senior Open will be his last.

Watson confirmed his retirement following a third-round 72 at Royal Lytham & St Annes, when he admitted he no longer has "the tools in the toolbox" to be competitive in the Senior majors.

The 69-year-old is one of the finest links golf players in history having won The Open five times before adding another three Senior Open titles while never missing the cut in his 18 appearances in the Senior version.

Watson also announced he would no longer compete in the US Senior Open, an event he finished in the top 20 last month and shot his age, or lower, in three of the four rounds, although he intends to tee it up on the odd occasion on the PGA Tour Champions.

"I've thought quite long and hard about the decision I've made," said Watson, almost 10 years to the day since he was an eight-foot putt away from landing an astonishing sixth Open title at the age of 59. "It has to do with really a pretty sensible assessment of how I play the game now.

"So, therefore, I'm basically declaring now that this is my last Senior Open Championship, and I'm also going to hang up the spikes in the US Senior Open.

"I've had a good career playing professional golf all these years. I've run across so many fine people who have helped me and supported me. First of all, my wife who is battling cancer now. It's going to give me some time to go out and compete with her.

"And over the years we've been around each other. I've seen a lot of people from the press over the years over here. Really enjoyed the times I've spent. It's not to say I won't be over here again. I'll be back at The Open next year as an ambassador for R&A.

"But my competitive days in The Open Championship are finally over. And as I said, I'm good with it. It's a decision that I am very happy with."