"I've heard rumours! I won't tell you who I heard them from, but it wasn't from him. It was from one of his friends!" Na tells Sky Sports News 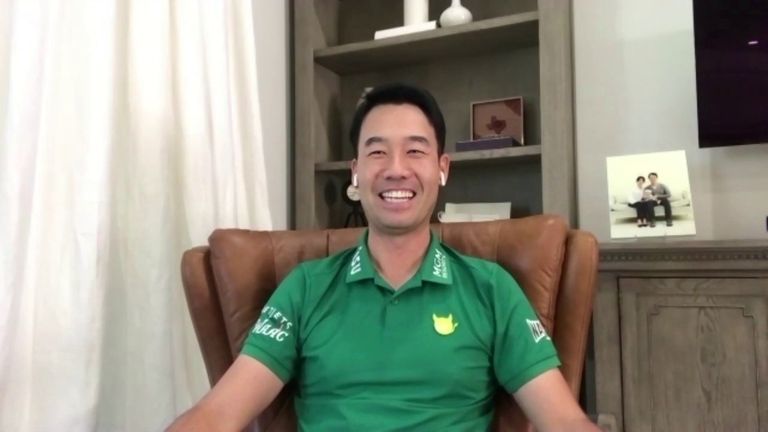 Kevin Na has dropped a big hint that Tiger Woods will be the next USA Ryder Cup captain, when the competition is played in Italy in 2022.

In an interview with Sky Sports News, the world No 30 said it was his aim to make this year's team in Whistling Straits when he accidentally let the big cat out of the bag.

"My goal is to make the Ryder Cup team this year, and I know the following Ryder Cup is in Italy and the captain I believe is Tiger Woods, so that's another thing that I'm looking forward to."

Upon realising that he may have let slip a secret, Na backpedalled. "I heard rumours! Am I starting a rumour? That's what I heard. Am I not supposed to say anything? I don't know, I've heard rumours! I won't tell you who I heard them from, but it wasn't from him. It was from one of his friends!"

Woods captained the USA to victory in the Presidents Cup in Australia last December. His predecessor two years earlier was Steve Stricker, who is Ryder Cup captain this year in his home state of Wisconsin.

Na was disappointed to narrowly miss out on making Woods' team for Royal Melbourne at the end of last year, and says he's been unlucky with Ryder Cup qualification in the past.

"One year I finished 2nd, 2nd, 3rd in the first three events but because it was in the Fall I didn't get any points for it. The same thing this year; I won the Shriners Hospital Open [in October 2019] and even though that's the fourth tournament of the season it doesn't count towards the Ryder Cup points. So timing-wise it hasn't been good for me, but I'm still somewhat young, I still have time!"

Should he qualify for Stricker's team in September, he has no reservations about the possibility of playing behind closed doors.

"I'd be happy to tee it up. It's still an honour, you're still playing for your country, the whole world is watching. Yes, you wouldn't have that same atmosphere and the atmosphere at a Ryder Cup is just extraordinary, but I would still be honoured to play.

"That said, pushing it to 2021 isn't actually a bad idea. We can get the fans going and we can have back-to-back years of Ryder Cup, that would be very cool."

Na will be the defending champion when the PGA resumes after a three-month hiatus on June 11th with the Charles Schwab Challenge at Colonial in Texas.

The 36-year-old says he has some concerns about returning to tournament action, but is confident the PGA Tour are doing everything to keep players safe.

"As a defending champion I have to be there. But I can say 'I don't feel comfortable, I don't want to play' and I don't think anyone's going to say anything against that.

"Are there some concerns that I have? Yes. Obviously getting on a flight is a concern. If I do test positive and I can't go anywhere for two weeks, I can't see my family for two weeks, that's going to be miserable.

"The PGA Tour want to make this perfect, they want to make sure that nobody gets sick. All it takes is one player, one caddie, one member of staff to get severely sick and they've got to pull the plug."

Na also has a great deal of sympathy for PGA Tour players living outside of the US, who under current legislation will have to quarantine for 14 days upon arrival in America,

"I understand what the foreign players are feeling. If you're overseas, you have to come over, quarantine and let's say you go to the tournament and you test positive - or these tests are not 100 per cent accurate, you could have a false positive.

"You can't play the tournament, you flew all the way to the US, you're quarantined for another 14 days and you've got to go back home! It's a nightmare. I know it's a small percentage, but it could happen."