Champions for Charity: Woods and Manning win as $20m raised for charity 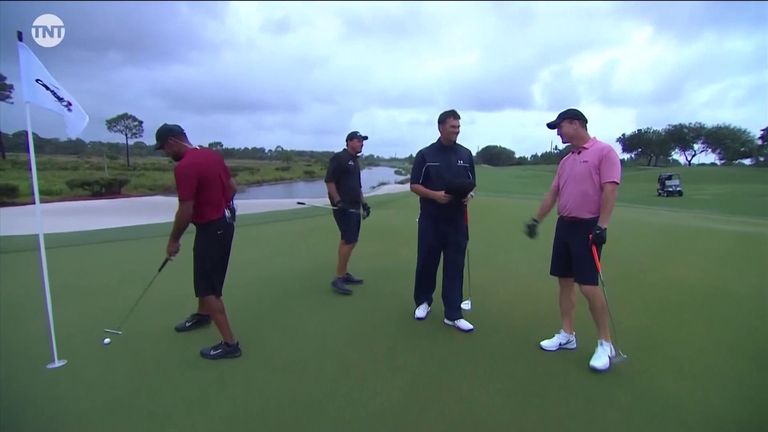 Tiger Woods got the better of long-time rival Phil Mickelson in an entertaining second instalment of "The Match" which raised $20m for Covid-19 charities in the United States.

Woods paired up well with an impressive Peyton Manning, who was by far the better of the two quarterbacks at a wet and windy Medalist Golf Club, with Tom Brady enduring the sort of day that every club golfer dreads when heading to take part in a pro-am.

Brady did at least conjure up the shot of the day, a sensational hole-out from the fairway at the par-five seventh which earned a $100,000 donation from Brooks Koepka, but that was a rare good strike from the legendary NFL quarterback who claims a handicap of 8.1.

The Match 2 - Champions for Charity, was substantially more watchable and enjoyable than the original $9m extravaganza that featured Woods, Mickelson, a number of hefty side-bets and little that resembled high-quality golf back in November, 2018.

Played in front of a handful of officials and the host broadcasting team at Woods' home club in Hobe Sound, a washout looked likely after several bouts of torrential rain delayed the start by 45 minutes and kept the club greenstaff busy keeping the greens free of standing water.

The result might have been irrelevant compared to the vast sums of money raised for worthwhile causes, but Woods and Mickelson were clearly relishing the chance to unleash the competitive juices that were rendered dormant by the coronavirus pandemic in March.

For those looking for clues to the form and fitness of the pros, Woods looked in excellent shape from tee to green - barely missing a fairway with his driver and even admitting to his rival of almost 25 years that he couldn't compete with Mickelson's distance on the designated long-drive holes.

And Mickelson leapt on the opportunity to rub salt into Woods' wounded bravado by offering a clear reminder that he will be eligible to join the PGA Tour Champions when he turns 50 in just three weeks' time.

Mickelson did struggle with his game over a three-hour front-nine, although he provided some trademark highlights when the format shifted to greensomes after the turn and celebrated a "salty bomb" on the par-four 11th, where a mammoth drive of some 330 yards pitched six feet from the hole and settled in the rear fringe, with Brady knocking in the putt for eagle.

Unlike last week's "Driving Relief" headlined by Rory McIlroy, there was plenty of interaction between the star quartet, with encouragement, good-natured ribbing and acknowledgement of good golf all in equal measure, while the interjections of Charles Barkley kept the mood light.

The shrewd addition of Justin Thomas to the on-course commentary team was a particular delight, the world No 4 announcing himself as a natural talent in the role which featured some close-to-the-mark jabs at former NBA star Barkley and an abundance of insightful chat with Woods and Mickelson.

On a day when many players would not have contemplated braving the elements for a friendly fourball, the gallant competitors toughed it out and rewarded the viewers with close-to five hours of humour, interspersed with some good golf given the conditions.

For the record, Woods and Manning cruised into a three-up lead after dominating the front-nine, an advantage that could have been a couple more had Mickelson not holed a few clutch putts with a trusty old wand nicknamed "Tiger Slayer", while Brady took a little gloss off his spectacular birdie at seven when he split the back of his trousers when picking his ball out of the cup.

"That's how we roll" was the battle cry from Mickelson when Brady converted his eagle putt at the 11th for their first win of the day, and the lead was halved at the 14th after Manning, solid and dependable throughout with his iron play, missed a three-footer for par on the 14th green.

The pace of play quickened noticeably with sunset approaching, and the par-three 16th was costly for Seattle Seahawks quarterback Russell Wilson after he pledged to donate $100,000 for every tee shot that finished inside 12 feet from the flag - Woods being the only player to miss that target with Manning having knocked his to "gimme" range.

Woods and Manning closed out victory in dusk on the 18th, where Brady lost yet another ball from the tee and chunked the team approach from Mickelson's tee ball, with Woods lagging stone-dead from 30 feet after one of many stellar iron shots from his partner.

"It's great, the fact that we all came together and we were able to raise $20m for those that have been so severely affected," Woods said. "This is our arena. This is what we do. We couldn't imagine going out onto the field and doing what they do."