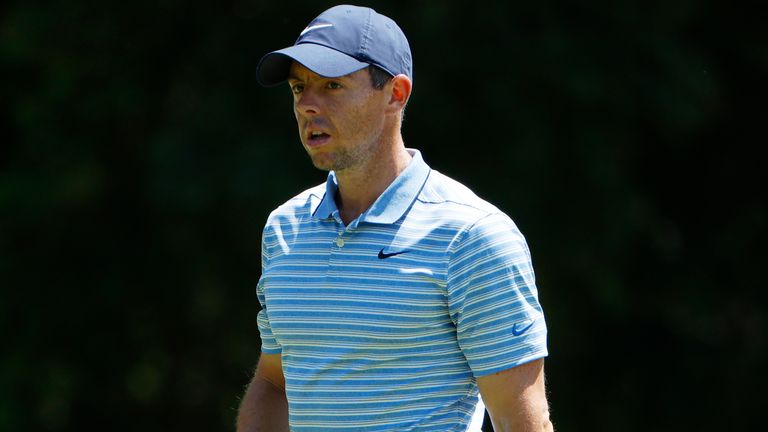 Rory McIlroy has criticised the PGA Tour members who opted not to travel to the US for the resumption of tournament golf, and insisted they cannot complain at losing out on world ranking points.

McIlroy's Ryder Cup team-mates Tommy Fleetwood and Francesco Molinari were among the high-profile professionals who decided to stay in the UK rather than go through the two-week quarantine process required for those arriving in the US.

Matt Fitzpatrick did make the trip three weeks prior to the restart at last week's Charles Schwab Challenge, while McIlroy's caddie, Harry Diamond, was happy to self-isolate for two weeks before heading to Colonial Country Club.

With the European Tour not resuming until next month, many of its members hit out at the decision of the Official World Golf Rankings bosses to restart the ranking last week, claiming it was unfair that the PGA Tour stars would be able to earn points for several weeks ahead of their European counterparts.

But ahead of this week's RBC Heritage in South Carolina, McIlroy insisted that certain players only have themselves to blame for missing out on ranking points, while he also claimed they should have made the effort to travel to the US "if they cared about their careers".

"Personally, if I were in their shoes and I was asked to come over to the States and shelter in place or quarantine for two weeks before these tournaments, I would have done that," said the world No 1, who was just three shots off the pace after 54 holes in Texas before stumbling to a closing 74 and finishing outside the top 30.

"I mean, if you really care about your career and care about moving forward, you should be here, I think. Last week was 70 World Ranking points for the winner, this week it's 74.

"And I get that there are different variables and families and stuff involved, but we all have the means to rent a very nice house in a gated community in Florida, and it's not a hardship for two weeks to come over and quarantine. I mean, it's fine. My caddie Harry came over and did it. He stayed in our guest house. The two weeks flew by.

"I honestly don't understand the guys complaining because there is a solution to it. You can come over here and do what needs to be done. It might seem a little harsh, but I don't get that mindset, especially if you care about your career and you want to advance."

Despite the absence of some of the higher-ranked non-American players, and with Tiger Woods yet to return, McIlroy believes the fields for the first two weeks of post-shutdown golf have had a major feel about them.

"That is a good feeling, that's what we all want. We all want to play against the best fields week in, week out. I guess a silver lining to all this is that it seems like all the top guys are going to play a little more often going forward, and that's a good thing for the Tour, and for us, and for the people at home that are watching."