SSN will provide updates from all three courses, with daily reports on the Sky Sports website and extended highlights first being shown on Tuesday August 11 from 9pm on Sky Sports Golf

The Rose Ladies Series reaches its climax this week with the Grand Final, where six players are still in with a chance of topping the season-long standings.

Played over three days across three courses and beginning on Wednesday, the 54-hole tournament is the eighth and final event of a special mini-series that has been sponsored and organised by Justin Rose and his wife Kate.

The series has enabled women's professional golfers to get back competing during the Ladies European Tour's coronavirus-enforced shutdown, with Solheim Cup stars and former majors champions among those to have featured over the past two months.

Georgia Hall holds a narrow advantage in the standings after posting top-two finishes in all five of her starts, ending runner-up in her first three appearances before following a narrow victory at Bearwood Lakes with a three-stroke win at The Shire last week.

Hall is just 16.6 points ahead of Charley Hull - the highest-ranked player involved in the series - who won the season-opening tournament at Brockhurst Manor and has finished no worse than tied-13th in any of her seven starts in recent weeks. 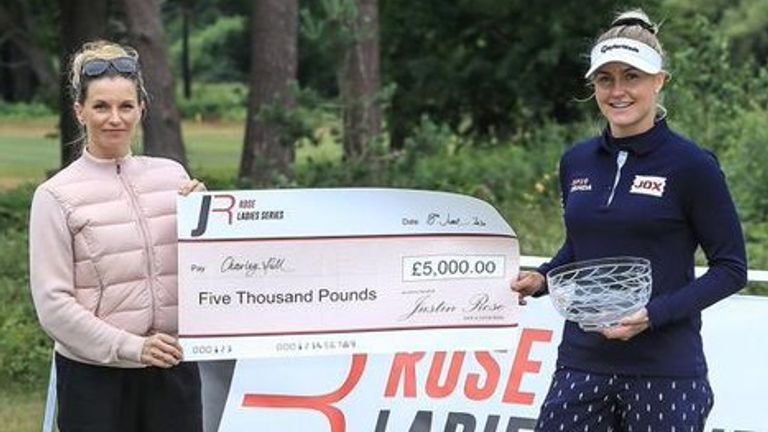 Liz Young, who initially came up with the idea of an event to help English female golfers during the coronavirus pandemic, sits in third spot after three runner-up finishes in the series, with Gabriella Cowley - who won week five at JCB Golf and Country Club - in fourth place.

Moor Park winner Meghan MacLaren is in sixth position, while Annabel Dimmock is in seventh and is the only other player with a mathematical chance of winning the American Golf Order of Merit.

Scotland's Gemma Dryburgh is above both MacLaren and Dimmock in the standings after posting back-to-back wins at The Buckinghamshire and Royal St George's, although won't feature as she's currently in action in America on the LPGA Tour.

Only players who have played a minimum of four of the first seven tournament are eligible to compete in the Grand Final, with the opening round taking place on Wednesday at North Hants Golf Club - Rose's home course - and the second round being held at The Berkshire the following day.

The top 35 players and ties will then head to Wentworth's iconic West Course for a historic day, the first pro women's tournament to be hosted at the Surrey layout, with double Order of Merit points on offer for the final event of the season.

Sky Sports News will be providing updates from all three courses, with daily reports on the Sky Sports website and extended highlights first being shown on Tuesday August 11 from 9pm on Sky Sports Golf.