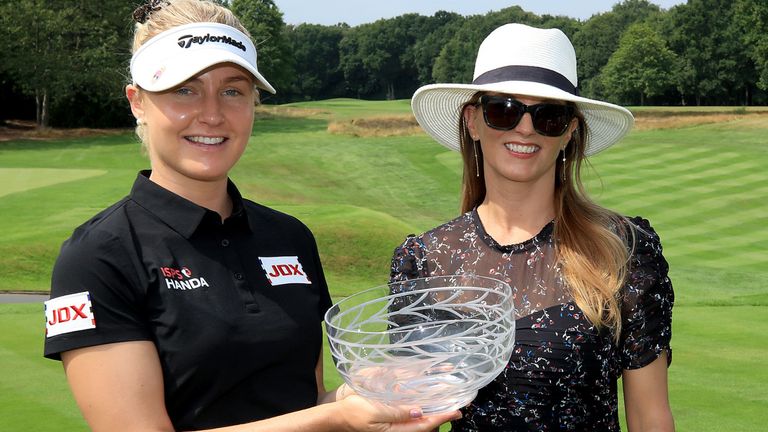 Kate Rose hopes the Rose Ladies Series will provide the springboard for women golfers to step up their fight for equality in the sport.

While the PGA Tour returned to action in June following the coronavirus shutdown, with the European Tour resuming early last month, members of the Ladies European Tour were set to be inactive until this week's Ladies Scottish Open.

But Liz Young's intention to hold a one-off competition at Brokenhurst Manor gained publicity from an interview with Kate Rowan in the Daily Telegraph, an article which was read by Paul McDonnell, Justin Rose's long-time friend and manager.

McDonnell sent the article to the Roses, who got in touch with Young and the conversation spiralled into a series comprising seven events as well as a two-tournament Grand Final, which later became three when North Hants agreed to stage an extra 18 holes.

Unfortunately, the final round at Wentworth was curtailed by a serious fire, but Kate is happy that the series "ticked every box" in terms of preparing players for their return to competition, the number of historic "firsts" for the women's game, and showcasing the players who would have struggled to find ways to get in the spotlight.

"The whole series was designed as a springboard for the ladies to prepare them for the return of the Ladies European Tour, and hopefully it's increased their confidence and they've got rid of some cobwebs," Rose told The Women's Sport Debate on Sky Sports.

"I spoke to Justin about how the ladies didn't have any playing opportunities, and from a competitive point of view, he fully understood that was not good for them. And from a business perspective, they weren't being seen, so they had no sponsorship opportunities either.

"So we gave Liz a call and asked her what help she needed, discussed making it bigger, having a series, and it kind of spiralled from there. We started calling some golf courses, and we were amazed at how positive the reaction was.

"Sometimes, when everyone is so busy in their own world, it's hard to look around and realise who is struggling. And when you have been shown, and you do know, it's hard to unsee that. The inequalities in sport, and particularly in golf, became very apparent once we opened our eyes to it, so we were keen to at least shine a light on the ladies.

"At the beginning of the series, Justin said: 'The dreams for female golfers are the same, but it is the opportunity that is skewed'. That summed it up really beautifully, as he seems to do!

"But that's entirely what we've been about, to try and give the ladies more playing opportunities. What we've been able to do is a tiny amount, it was just a short-term stop-gap, but hopefully the coverage we've received has shone a light."

The Roses contributed a substantial sum of their own money towards the series and later attracted crucial sponsorship from American Golf and Computacenter, who Kate feels "wanted to be associated with and being part of the conversation to move things forward in terms of equality".

History was made in week four when Royal St George's hosted its first ever women's professional event, and the West Course at Wentworth had also never held a competitive tournament for women in its 94-year history.

"It's all been a step in the right direction, and all on some great golf courses," Rose added. "I saw an interview with Dame Laura Davies, and she hadn't even played Royal St George's until our event. So all of these are firsts, and I don't think there will be any going backwards now.

"All the clubs have embraced having the ladies there competing, and from the feedback we've been getting, they're keen to do more. So hopefully that's opened the door for more opportunities with other sponsors, other golf courses, other events, and it's just started the ball rolling in the right direction.

"The ladies have all enjoyed it and learned a lot from it. Having a scorecard back in their hand has made a difference, and also having a 36-hole cut in the Grand Final made a big difference. Even though we didn't manage to get the final round complete, we did manage to implement the cut and that had a big impact over the first two rounds.

"I think the Series has ticked every box we were hoping to tick, who knows what the future holds but I'm really thrilled. Once we've recovered from the disappointment of the fire at Wentworth, we'll look back on this and feel pretty happy about the number of firsts, and how we've been able to help nudge that door open for the ladies to step through.

"We've had some great stories, and it's on them now. It's their story."