"That's definitely a goal of mine for the year ahead, so to pick up a lot of points this week is great. I want to secure my place on that team as fast as possible, and this week's certainly gone a long way to helping me achieve that goal"

Tyrrell Hatton admitted he intends to qualify for Europe's Ryder Cup team as quickly as possible as he reflected on another dominant victory in a Rolex Series event in Abu Dhabi.

Hatton had much to celebrate after his four-shot win in the opening European Tour event of the season, a win which will see him dethrone Rory McIlroy as British No 1 when the world rankings are updated on Monday, while his tally of four Rolex Series wins equalled Jon Rahm's record in that category.

The in-form Englishman now has four wins in his last 20 starts and could be ranked as high as fifth in the world, depending on where Patrick Cantlay finishes at The American Express in California.

McIlroy extended his overnight lead to two strokes with birdies at two of the first three holes in blustery conditions on the final day in Abu Dhabi, but Hatton refused to panic and birdies at the seventh and ninth either side of McIlroy's bogey at eight gave Hatton a two-shot lead heading into the back nine.

And just as McIlroy looked set to close the gap as he lined up a 30-foot eagle putt on the 10th green, Hatton holed from five feet further away for a crucial birdie and he went on to fire a bogey-free 66 to finish four ahead of Jason Scrivener, and five clear of McIlroy.

"Any time you win it gives you massive confidence, and to win in my first start of the season is a great feeling with Ryder Cup points starting again this week," said a jubilant Hatton, who made his Ryder Cup debut for Europe in 2018. 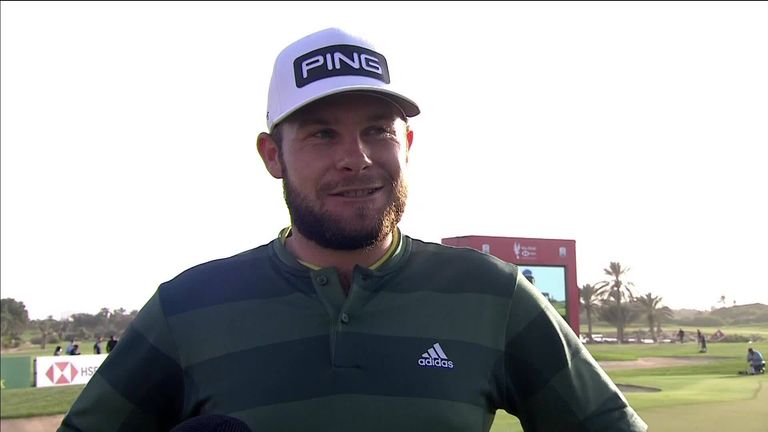 "That's definitely a goal of mine for the year ahead, so to pick up a lot of points this week is great. I want to secure my place on that team as fast as possible, and this week's certainly gone a long way to helping me achieve that goal.

"The last Ryder Cup was the best golfing experience of my life to date. Home fans, and that first tee with the grandstand was just amazing. I absolutely loved the week.

"I'm sure it will be a very different experience playing away, if I make that team, and hopefully I'm there at Whistling Straits. So I'd love to try and help the team win.

"But you know, there's a lot of golf to play between now and again, but fingers crossed that I'm there."

Hatton conceded his birdies on the ninth and 10th were key moments in the round, with McIlroy then slipping three behind with a bogey at 11, where Hatton enjoyed another lucky break when his tee shot bounced out of a bunker before he turned the screw with another birdie at the 13th.

"Nine was a horrible tee shot all week," Hatton added. "I said to Radar when we got up the fairway that I was glad I don't have to see that tee shot again for another year. So yeah, to make birdie there is like a bonus.

"And I was very fortunate to make birdie on 10. That putt was going eight feet past at least probably. On another day, that misses the hole and you potentially miss the one coming back and there's a two-shot swing on one hole.

"You need luck to win tournaments, and thankfully luck was on my side today. And I had it again on 11, where my tee shot pitched just in the bunker, and we've seen some balls plug in the faces this week.

"So I was again very fortunate to bounce out and be in the rough with a decent lie, which obviously go on to hit it on the green and make par. I think that was a sort of crucial part of my day."