The Masters: Bryson DeChambeau in better spirits after second-round 67 at Augusta

Bryson DeChambeau: "There are so many things going on around here, and the wind makes it diabolical. I don't think you'll ever be able to figure it out, but I've just got to be more comfortable" 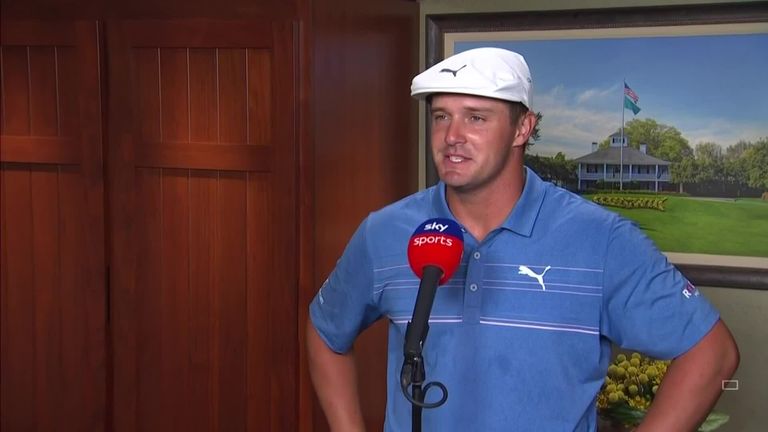 Bryson DeChambeau is embracing the challenge of an "amazing and spectacular" Augusta National, but he also felt the course was "diabolical" in windy conditions as he got his Masters hopes back on track on day two.

DeChambeau started the second round close to the projected cut line having struggled to an opening 76 on Thursday, admitting afterwards that he had struggled with his complex calculations when considering the severe undulations of the layout.

But he got his numbers "dialled in" for most of his second round, particularly over the closing stretch as he birdied four of the last six holes to card a 67 and get to one under par for the tournament, taking him into the weekend six shots adrift of leader Justin Rose.

"I don't think you can ever figure this place out," said the big-hitting US Open champion. "There are so many things going on around here, and the wind makes it diabolical. I don't think you'll ever be able to figure it out, but I've just got to be more comfortable.

"There were times I didn't execute again. For some reason every year I get here, I'm playing pretty well coming in and I don't execute the way I want to. Today was nice to be able to get it back and shoot five under and get myself somewhat in contention.

"This weekend, anything can happen if I go five under, five under, maybe even more than that, you never know. I view it as I've got eight great shots at some par-fives if I hit the driver well, and I think I make a couple birdies on some par-fours and take it easy on the difficult holes, I'll be fine.

"I think if I could just ball strike it a little bit better. I felt like my iron play was great, we didn't hit it long too many times today, so I was proud of that. If I can keep myself positive, in a positive mindset and towards making a lot of birdies, you never know."

DeChambeau caused a stir ahead of last year's Masters in November when he revealed he considered Augusta as a par 67, but he broke 70 only once in three rounds and finished 18 shots behind Dustin Johnson, although he was hampered by illness.

"Clearly the par was 74 for me last year," he joked. "But I would say, for the most part, I think this golf course is an amazing and spectacular, challenging venue and championship. I think one of the most amazing things about this place is that it can turn on you real quick when you least expect it.

"For example, last year in November you had a lot of guys going low, and this year it's not the case. Hats off to Augusta National for what they've done to the place.

"I've got to be a little more receptive to the golf course and the conditions at hand. I wasn't yesterday, I didn't understand the greens as well as I could have.

"Just being more comfortable in general at this golf course and being able to execute better, I think that's what matters most to me and should matter most to me, and hopefully I can do that this weekend. I don't know, we'll see."