Valspar Championship winner Sam Burns fires a 10-birdie 62 to earn the halfway lead at the AT&T Byron Nelson, Jordan Spieth slips six shots behind, while Lee Westwood plays himself back into form with a 64. 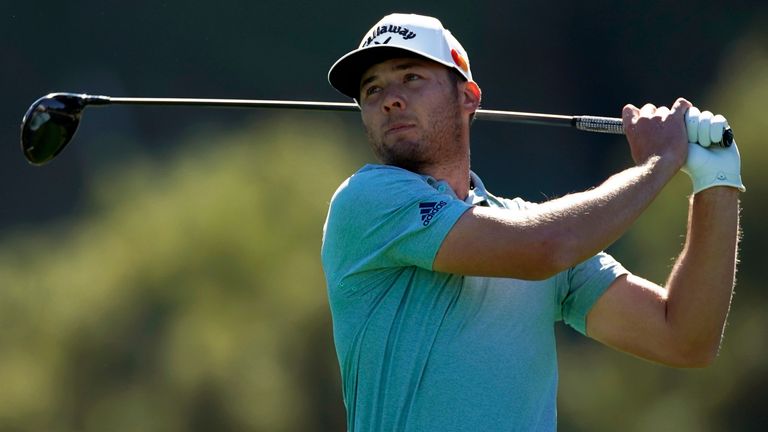 Sam Burns fired the lowest round of his PGA Tour career to race into the halfway lead at the AT&T Byron Nelson in Dallas.

Burns, who broke into the world's top 50 with his win at the Valspar Championship earlier this month, birdied six of the last eight holes to card a 10-under 62 and hit the front on 17 under par after another day of low scoring at TPC Craig Ranch.

Overnight co-leader Jordan Spieth struggled to overcome a "bad mood" as a 70 left him six off the pace, but Lee Westwood returned to form with a 64 getting him to nine under - two better than Jon Rahm and Bryson DeChambeau - while Brooks Koepka will head to Kiawah Island earlier than scheduled after missing the cut.

Burns is clearly still high on confidence following his PGA Tour breakthrough victory in Tampa, and he put himself in prime position to make it back-to-back wins following his birdie frenzy on the inward nine.

The 24-year-old was three under through eight holes before making five birdies over the next six, including one at the 14th when he skied his tee shot and barely reached the fairway, atoning with a wedge to 17 feet and a perfect putt.

A birdie, birdie finish capped a superb day at the office, which he felt was just reward for all his hard work in practice, which he continued to devote himself to even after his impressive three-shot victory over Keegan Bradley at the Valspar Championship.

"The biggest thing for me is just seeing the hard work that we put in it, start seeing results from that," he said. "A lot of times you don't know how long the results are going to take. Golf is a fickle game!

"So it's cool to see some feedback from the progress we've made back home and seeing it in tournament play as well. Everything out there felt great, we got into a good rhythm throughout the round.

"Made a run right there on the back nine, and so it was nice to be able to finish it off with two birdies at the end, a good way to end the day. Now I'm just trying to get a good game plan out here for tomorrow and let's see what happens."

Alex Noren emerged as Burns' closest challenger after the Swede carded an eight-birdie 64, although he spurned a great chance to reduce the deficit to just one stroke when he missed a six-foot birdie putt on his final green.

Spieth had slept on the lead that he shared overnight with JJ Spaun after both fired Thursday 63s, but Spieth's 4.30am alarm call did not have him in the best frame of mind to build on his stellar opener, and a bogey at his first hole - the 10th - damaged his mood further.

He did hit back with birdies at 14 and 17, but he had to wait until the ninth to add another as he lost plenty of ground on Burns with the majority of the field breaking 70.

"When I wake up at 4.30am I'm in a bad mood just as most people probably are, and I needed to kick that today," said Spieth. "Yesterday, even when I wasn't playing a good hole I was kind of laughing at a miss or when I chunked it and laughed. Today I had a shorter fuse.

"Saturday will be a fun test. There is no reason for me not to trust everything I'm doing. At this point, I've got an opportunity to contend here, and if I can get myself a chance on Sunday, that is the best prep for this tournament and also the PGA next week."

Westwood responded to the disappointment of his opening 71 with five birdies in his first six holes on Friday laying the platform for a 64 which lifted him 95 places up the leaderboard to nine under.

"I just couldn't get any momentum yesterday," said the English veteran, making his first start since the RBC Heritage. "I don't know whether it was having three weeks off, and it's always a bit tricky on when you come out and you see nine unders on the board.

"You shouldn't really pay attention to that, but it puts a little bit of pressure on you. I didn't really get off to a very good start yesterday and didn't get any momentum going. Today I got off to a good start, got some momentum going, hitting it close, and I was five under after six holes."

DeChambeau was evidently furious, and short with the media as he reflected on his first-round 69, but he was in better spirits when he made four birdies in five holes to turn in 31, and he added another at 14 only to lose his focus late in his second round, dropping shots at the 16th and 17th.

The US Open champion's 68 got him to seven under alongside world No 3 Rahm (69), but Koepka's rounds of 70 and 71 were three shots too many to make the halfway cut, which fell at six under par.

The encouraging starts for Luke Donald, Padraig Harrington and Sergio Garcia were also undone by poor efforts on Friday, with Donald's 73 getting him into the weekend with nothing to spare, while Harrington and Garcia both laboured to three-over 75s to join Koepka on an early trip to Kiawah Island for next week's PGA Championship.