US Open: Costly mistakes hamper Rory McIlroy in second round 73 at Torrey Pines

Rory McIlroy flirted with both the lead and the halfway cut in a "roller coaster" second-round 73 at the US Open, carding five birdies and seven bogeys as he slipped six shots behind early leader Richard Bland. 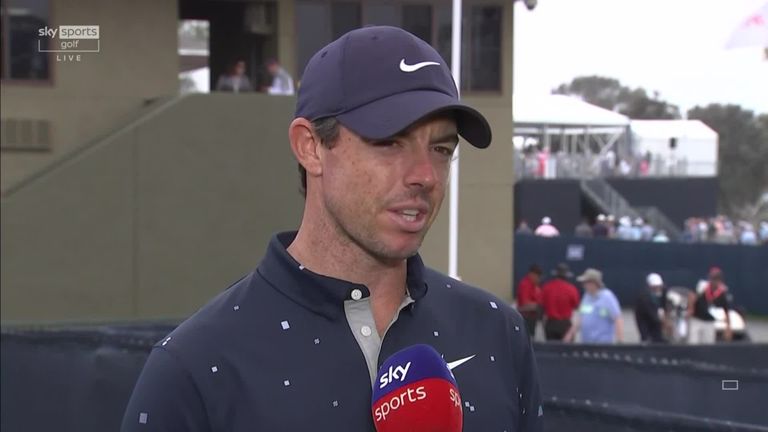 Rory McIlroy endured another "roller coaster" round in a major championship as his US Open challenge was blighted by inconsistency on day two at Torrey Pines.

McIlroy was just two shots off the lead in the early stages of his second round, but three bogeys in four holes left him flirting with the cut line with four holes remaining before two late birdies salvaged a 73 - one over par at the halfway stage.

An early setback at the 11th was countered by a sublime second to 12 which almost found the hole for eagle but left him a tap-in birdie, which he followed with a brilliant putt from the fringe at the long 13th.

That lifted him to four under and into position to challenge for the halfway lead, but a poor approach from the fairway at 14 led to the first of three straight bogeys, a run he halted with a good two-putt for par from outside 50 feet at the 17th.

McIlroy got back on track with a welcome four at 18, but he three-putted the second green and his iron-play was again found wanting as he dropped further shots at the fourth and fifth to crash to three over par and in danger of having to catch an early flight home.

But he regrouped to claw a shot back with a 20-foot putt at the sixth, and he followed two steady pars with a closing four at the ninth that completed a clean-sweep of birdies on the par-fives for the day.

"A bit of a roller coaster," he said after signing a card featuring five birdies and seven bogeys. "I got off to a good start, made a couple of birdies early on and was under par for the round. Then I made a couple of mental errors and missed it in the wrong spots, and when you do that around this golf course, it's just really hard to save par.

"I made a few bogeys, but to birdie two of the last four holes definitely makes me feel better about the round and gives me a nice bit of momentum going into tomorrow.

"Even though Richard Bland is up there at five under, one over par is right in it. So I'm in for the weekend and still feel like I've got a really good chance."

McIlroy spoke only briefly to the media before heading to the practice range to work with Pete Cowen on fixing the flaws with his iron game, which he felt was caused by problems with alignment, rather than technique.

"I think my alignment was getting a little off, so I'll go work on that on the range this afternoon," he added. "I felt like I drove the ball pretty well. I think I drove the ball better today than I did yesterday.

"I just need to straighten out the irons a little bit. If I can do that, as I said, I should have a good chance."