Bubba Watson's driver head flies off mid shot, and he still makes birdie on that hole

"If I was going to hit anybody I was hoping it would be Brooks. But I missed him, not that good at aiming!" Bubba Watson joked (we hope!) that he was aiming for Brooks Koepka when his driver head flew off. 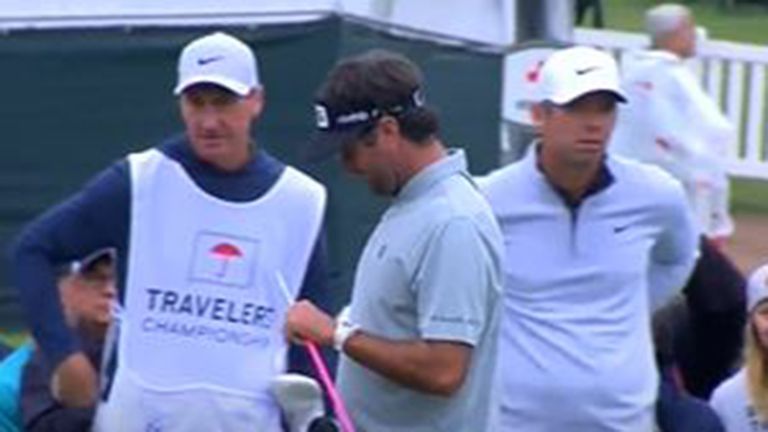 Bubba Watson was relieved that no spectators were injured when the clubhead of his driver flew off in mid shot during his second round at the Travelers Championship.

But despite the major equipment malfunction, Watson still managed to hammer his drive 295 yards up the second fairway as his clubhead, which came loose just as he impacted the ball, headed towards the galleries.

Fortunately, the loose head missed his playing partners and came to rest in the rough, although Watson joked that if anybody was going to get hit, he was hoping it would be Brooks Koepka who was on the adjacent first green at the time of the incident.

The left-hander shrugged off the bizarre occurrence and pitched to 10 feet before rolling in the putt for birdie, and he picked up three birdies in a row from the fifth but gave one back when he missed a three-foot putt for par on the ninth green.

The four-under 66 matched his first-round effort and was enough to earn him the early clubhouse lead at TPC River Highlands, and he later revealed that a cracked shaft was the cause of his driver clubhead's sudden departure.

"It's one of those things," said the two-time Masters champion. "My driver head popped off. It's the shaft right above the hosel. It's cracked, broke, whatever you want to call it. The last time that happened might have been at the Presidents Cup in Korea, right before the first tee on the driving range.

“I like 3-wood here Bubba!” Says Ted Scott. Phil Mickelson offers to go ahead of Bubba while someone races to get his back-up driver. It doesn’t get to 3 tee in time and he hits 3-wood. https://t.co/e8iPWhePOL pic.twitter.com/PTNSL28mtn

"Luckily DJ [Dustin Johnson, playing with Koepka] was just out of the way and it didn't reach the crowd, so nobody got hurt, hit. Nobody in my group knew where the ball was. Once you hit, you're focused on where the driver head goes.

"But if I was going to hit anybody I was hoping it would be Brooks. But I missed him though. Not that good at aiming!"

Watson was able to replace the broken driver with his back-up, which arrived on the fourth tee, and he has now set his sights on emulating the late, great Billy Casper in becoming a four-time winner of this tournament.

"Yes, it would be with great company, but forget that," he added. "Just winning here or winning anywhere four times, or four times ever on Tour, just all those things all add up.

"It's one of those things where never dreamed I could win that many times, and now at one place having a chance to get four times and tie one of the greats of all-time, yeah, be a thrill of a lifetime."