Team Europe claimed a share of the spoils in the afternoon fourballs to move 5.5-2.5 ahead and retain their three-point lead on a controversial opening day at the Solheim Cup - watch day two live from midday on Sky Sports Golf.

Anna Nordqvist and Matilda Castren continued their unbeaten start to the Solheim Cup to help Team Europe retain their three-point lead on a controversial opening day in Ohio.

The Scandinavian pair cruised to a 4&3 victory over Lexi Thompson and Mina Harigae in the afternoon fourballs to secure their second point of the day at the Inverness Club, having defeated Danielle Kang and Austin Ernst in the morning session.

That win followed an unbeaten foursomes session for Team Europe and briefly moved Catriona Matthew's side into a 4.5-0.5 advantage, only for Nelly Korda and Ally Ewing to get Team USA's first full point of the contest after benefiting from a contentious ruling in their match.

Korda's eagle putt on the 13th stopped on the edge of the hole and was quickly picked up by Madelene Sagstrom, playing alongside Nanna Koerstz Madsen, with the rules official deeming the Swede to have not waited long enough and crediting the eagle to Team USA.

The decision moved Korda and Ewing one ahead with six holes to play and helped them complete a narrow victory on the 18th, while Lizette Salas found a final-hole birdie to see her and Jennifer Kupcho win by the same margin against Carlota Ciganda and Sophia Popov.

Another point for Team USA! 🔴

Lizette Salas reduces the deficit for the hosts, with just one match now left on the course. pic.twitter.com/7eGQZTP6pe

Georgia Hall and Leona Maguire's match against Brittany Altomare and Yealimi Noh also went to the par-five last, where the European pair secured a 1up win to give the visitors a 5.5-2.5 lead heading into Sunday.

The European pair carried on from where they left off in the morning foursomes and although Thompson chipped in on the third to get back to all square, Nordqvist and Castren won two of the next three holes and were never in danger of being reeled in, sealing victory after winning the 10th - the first time anyone had gone 3up all day - and 13th holes. 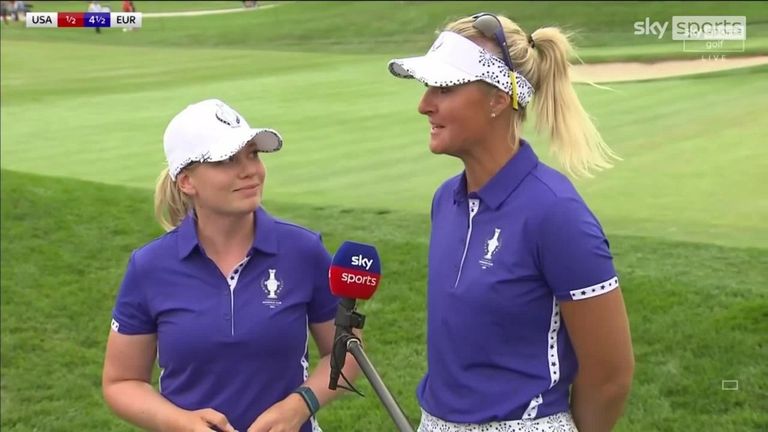 Koerstz Madsen and Sagstrom lost to Nelly Korda and Ewing 1up

A rollercoaster front nine saw the European pair go two up after two and then lose the fifth, seventh and eighth to fall behind, but the turning point came on the 13th when Korda's eagle putt stopped on the edge of the hole. Sagstrom was deemed to have acted too quickly in picking it up to concede, Korda was credited with an eagle to move one up and that was how the score remained as the final five holes were halved. 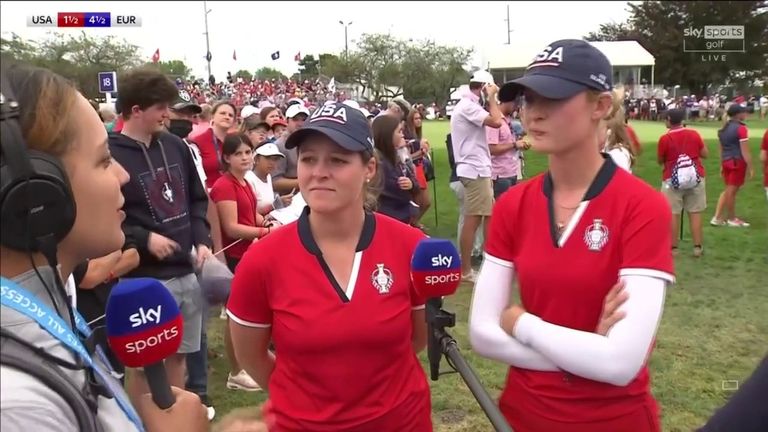 Ciganda and Popov lost to Kupcho and Salas 1up

Birdies from Popov on the fifth and seventh took the European pair two up, but Salas chipped in for eagle on the eighth to change the momentum of the contest with Kupcho's birdie at the 10th bringing it back to all square before the Americans went ahead for the first time when they both birdied the 14th.

Popov's birdie at the 16th levelled it up again but Salas went on to hole from five feet for a winning birdie on the 18th.

Hall and Maguire def Noh and Altomare 1up

Two up after two holes, Hall and Maguire lost the sixth, seventh and eighth to fall one down before Hall birdied the 10th and 15th to turn the tide. Hall also hit a superb approach into the last to make sure of victory. 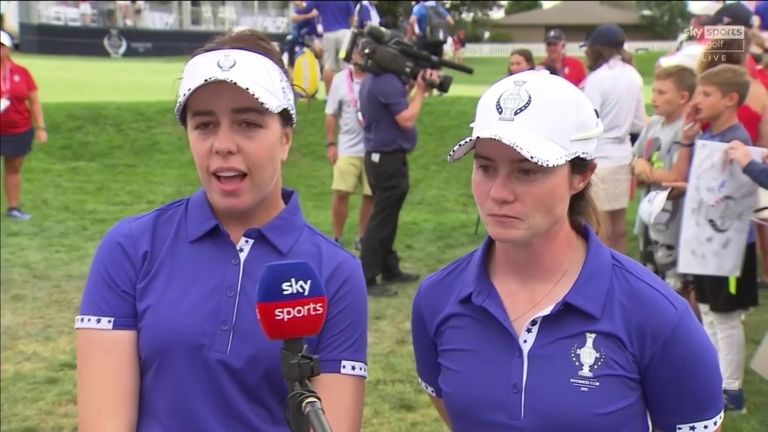